As networks continue to grow bigger and better, smartphone brands manufacture 5G-ready smartphones left and right. OPPO has recently dropped the Ace2, a smartphone with a lot of capabilities in 5G connectivity, gaming, and battery life. How does it keep up with other 5G-ready smartphones in the market like the Xiaomi’s Mi 10 Pro 5G? Read on and find out here. 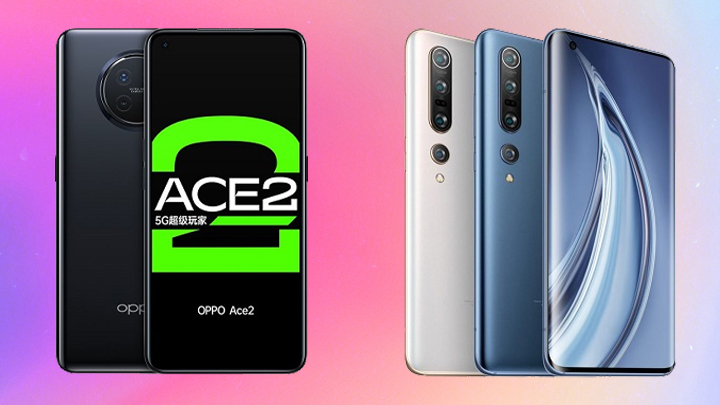 One of the main features of both smartphones is their respective displays, and each has a fair share of similarities and differences. The Mi 10 Pro 5G has a bigger screen size of 6.6.7-inch AMOLED FHD+ compared to OPPO Ace2’s 6.55-inch OLED. Second, the former is equipped with an AMOLED panel, while the latter only has OLED. However, both handsets have a 90Hz refresh rate, 180Hz of touch response rate, and supports HDR10+, which enhances the color and contrast of videos in its display.

Should you want to have a larger display in AMOLED, go for the Mi 10 Pro 5G. Otherwise, the OPPO Ace2 is for you.

Both with quad-rear cameras, the OPPO Ace2 boasts a circular camera module that houses the 48MP Sony IMX586 main, 8MP ultra-wide, 2MP black and white, and 2 MP depth lenses. Meanwhile, the Mi 10 Pro 5G has an elongated and rectangular camera module located on the left separating the 20MP ultra-wide from the 8MP long telephoto, 12MP short telephoto, and 108MP main lenses. The Mi 10 Pro 5G has a significantly higher main camera sensor, which remains the same in terms of punch-hole, front-facing cameras with the former having a higher 20MP shooter.

As both devices have Qualcomm’s Snapdragon 865 5G chipset matched with Adreno 650 GPU under the hood, expect a flagship performance when multitasking or playing games. Both also run on their respective custom UIs based on Android 10.

Memory-wise, OPPO, and Xiaomi listed their smartphones in two RAM configurations: 8GB and 12GB. The latter, on the other hand, uses both LPDDR5 for its configurations.

As 5G-ready smartphones that do more, both models feature dual stereo speakers for better and clearer audio, built-in cooling systems, in-display fingerprint scanners, and network acceleration capabilities. The MultiLink of Xiaomi allows the phone to connect on up to 3 networks simultaneously while the LinkBoost 2.0 of OPPO grants only up to 2 WiFi connection at the same time.

OPPO also added Breeno for the Ace2, a gaming voice assistant that allows gameplay screen recording and manages basic controls like adjustment of brightness, volume, and more, to the Ace 2. It also incorporates haptic feedback for a more immersive gaming experience.

If you want ample storage, big battery capacity, and high-resolution cameras with excellent zoom capabilities, then choose Xiaomi Mi 10 Pro 5G. But if you’re more of a gamer than a multi-tasker who finds haptic features, in-game voice assistant, and powerful charging a need than a desire, then go for the OPPO Ace2.

Which phone would you get? Is it the OPPO Ace 2 or the Xiaomi Mi 10 Pro 5G? Let us know in the comments below!