Realme has recently taken the wraps off its latest lineup of smartphones, the Realme 6 series. Included in the lineup is the Realme 6 and the Realme 6 Pro. We’ve decided to match the Realme 6 Pro with the Poco X2 as both of them have slightly similar display sizes, configurations, and even prices. See how they fare against each other. 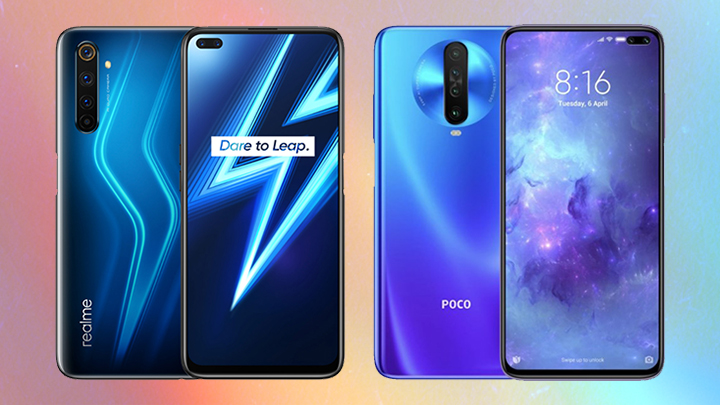 The Realme 6 Pro and the Poco X2’s display sizes don’t stray too far from each other, with the 6 Pro having a 6.6-inch screen while the X2 has a 6.67-inch panel. Both smartphones have slim bezels all over the screen, and both of them also do not have notches. Instead, both the 6 Pro and X2 employ a pill-shaped module to house their respective dual front cameras. The 6 Pro has its pill cutout situated on the upper left, while the X2 has it on the upper right. The 6 Pro has a 90Hz refresh rate, in contrast to the Poco X2’s faster 120Hz refresh rate. The Poco X2 also has a slight edge against the 6 Pro as it supports HDR 10.

Under the hood, the 6 Pro has a Snapdragon 720G chipset, while the Poco X2 has a Snapdragon 730G chipset. The SD720G is a fairly new processor, and the 6 Pro is one of the first smartphones out in the market to have it. As we don’t have SD720G benchmarks yet, we can’t exactly say much about how it differs from the SD730G. Both are mid-range gaming processors, though, so we’re certain that the SD720G is as capable as the SD730G.

When it comes to configurations, the 6 Pro and X2 both offer 6GB and 8GB LPDDR4X RAM. The two handsets also offer 64GB and 128GB of storage; however, the X2 adds 256GB storage as a third option. If those aren’t enough for consumers, both the 6 Pro and X2’s storage can be expanded up to 256GB via microSD

See also  realme C25s priced in the Philippines, to launch on June 15

Camera-wise, the smartphones are both equipped with quadruple cameras on the rear. The Realme 6 Pro has a 64MP Samsung GW1 primary, 8MP ultrawide, 12MP telephoto, and 2MP macro cameras. On the other hand, the Poco X2 has a 64MP Sony IMX686 sensor, 8MP ultrawide, 2MP macro, and 2MP depth cameras. They’re almost similar in the primary camera department, but differ when it comes to the three other lenses. As for their dual front cameras, the Realme 6 Pro has 16MP Sony IMX471 + 8MP snappers, while the Poco X2 sports a 20MP + 2MP setup.

If we’re looking at numbers, it seems like the Realme 6 Pro wins the rear department with its higher-resolution cameras, while the Poco X2 takes the win for the dual front cameras. Although we should remember, that doesn’t equate to actual photo quality. We’ve yet to see images produced by each smartphone side-by-side to judge that.

Android 10 runs on both smartphones, but of course, the two of them have their respective skins laid on top of it. The Realme 6 Pro sports Realme UI (that’s also based on ColorOS 7) and the Poco X2 has Xiaomi’s MIUI 11.

Looking at the prices, the Realme 6 Pro and Poco X2 have nearly identical figures. It’s also worth taking note that both the Realme 6 Pro and the Poco X2 aren’t available in the Philippines as of writing, and it’s currently uncertain whether the devices will receive a local launch.

Nevertheless, a great number of consumers out there are willing to play the waiting game. If you’re looking for a smartphone that has a fairly newer mid-range processor, a dedicated microSD card slot, dual front cameras that have an ultrawide snapper, and 30W flash charge support, go for the Realme 6 Pro.

Although, if you’re one who wants an HDR 10 display with a 120Hz refresh rate, higher front camera resolution, NFC support, IR blaster, and slightly larger battery capacity, you might want to get the Poco X2 instead.