Both realme and Xiaomi have just released their tablet offerings in the Philippines— the realme Pad and Xiaomi Pad 5. The Xiaomi Pad 5 arrived first, and it sports an 11-inch IPS LCD, a Qualcomm Snapdragon 860 processor, and an 8,720mAh battery. On the other hand, realme’s first-ever tablet— the realme Pad, features a smaller 10.4-inch IPS LCD, a MediaTek Helio G80 processor, and a 7,100mAh battery. So now, which of these tablets should you get, considering their specs and price tags? Let’s find out! 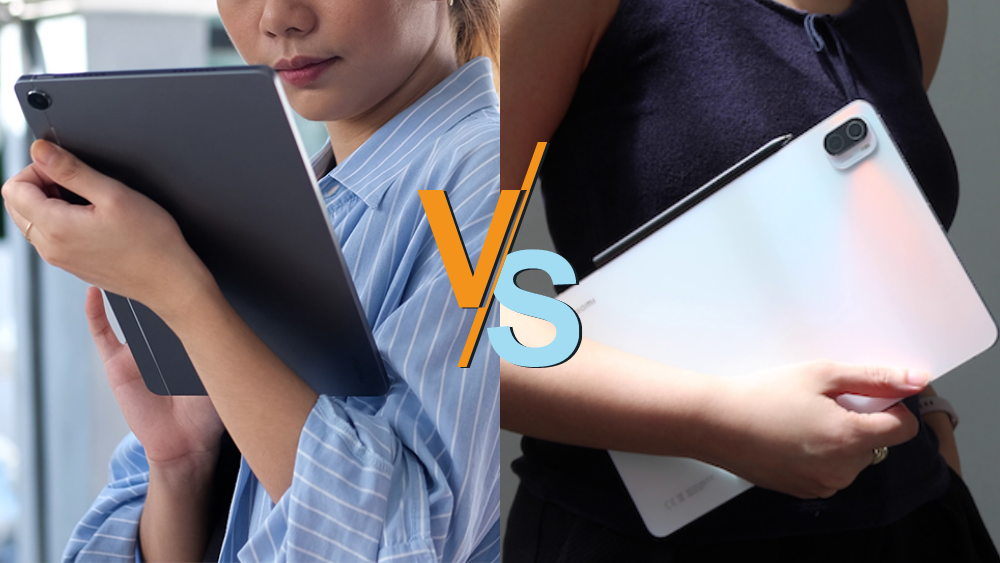 The first thing one notices is a device’s display. The Xiaomi Pad 5 sports a larger screen at 11-inch compared to the 10.4-inch of the realme Pad. Both tablets are equipped with an IPS LCD panel, but the Xiaomi Pad 5 boasts a higher screen resolution of 2560 x 1600px and a higher pixel density of 275PPI. What’s more, it also has a 120Hz refresh rate and up to 240Hz touch sampling rate, enabling a smooth scribbling experience with the Xiaomi Smart Pen.

The realme Pad is powered by a MediaTek Helio G80 processor paired with Mali-G52 MC2 GPU, while the Xiaomi Pad 5 is equipped with a Qualcomm Snapdragon 860 processor with Adreno 640 GPU.

The results clearly show that the Xiaomi Pad 5 achieves higher scores; thus, we could say it performs better.

The realme Pad is available in three RAM options: 3GB, 4GB, and 6GB. However, the Xiaomi Pad 5 is only available in a single configuration: 6GB. Although they are equal for having as much as 6GB of RAM, the lower RAM options also enable the device to be available at a lower price.

For the rear camera, the realme Pad has 8MP, while the Xiaomi Pad 5 has a higher resolution of 13MP. Upfront, both tablets have an 8MP selfie camera.

Both realme Pad and Xiaomi Pad 5 support the same connectivity features, including WiFi 5, Bluetooth 5.0, USB Type-C, and run on Android 11 under their custom skins. In addition, the realme Pad comes with 4G LTE support (4GB + 64GB and 6GB + 128GB variants), while the Xiaomi Pad 5 is a WiFi-only tablet.

For audio, both are also equipped with Dolby Atmos Quad Speakers and have Hi-Res Audio Certification. It’s a plus for the realme Pad, though, that it comes with a 3.5mm audio jack so you can plug in your wired audio devices.

The realme Pad has a 7,100mAh battery with 18W fast charging, whereas the Xiaomi Pad 5 comes with a larger 8,720mAh battery with a faster 33W charging support. We’ve already run both devices on PCMark’s Work 3.0 battery test, so you can check the results below.

Meanwhile, in our standard video loop test, which entails playing a 1080p video on loop at 50% brightness, 50% volume, and airplane mode turned on, the realme Pad yielded 14 hours and 42 minutes. On the other hand, the Xiaomi Pad 5 achieved an excellent 32 hours and 14 minutes.

The realme Pad gives you more configuration options, so those looking for a budget tablet may opt to get this one if they don’t need much RAM. It also has a 6GB + 128G variant as the Xiaomi Pad 5, but costs PHP 1K cheaper. It also grants you the benefits of LTE support, expandable storage, and a 3.5mm audio jack for your wired audio devices.

Nonetheless, choosing the Xiaomi Pad 5 gives you more perks, such as a larger, better, and smoother 120Hz display, better performance, longer battery life, a better rear camera, and stylus support. So, take note that these are the advantages you’ll get for spending PHP 1K more.