Redmi 9 vs Realme 6i specs comparison

Redmi 9 vs Realme 6i specs comparison

Xiaomi Philippines has officially launched the Redmi 9 in the country. With a MediaTek Helio G80 chipset, up to 4GB of RAM, quad rear cameras, and a 5,020mAh battery, it has a lot of similarities with the Realme 6i. If you have a budget of PHP 10,000 or less to get yourself a new smartphone, which of the two should you get? Find out here. 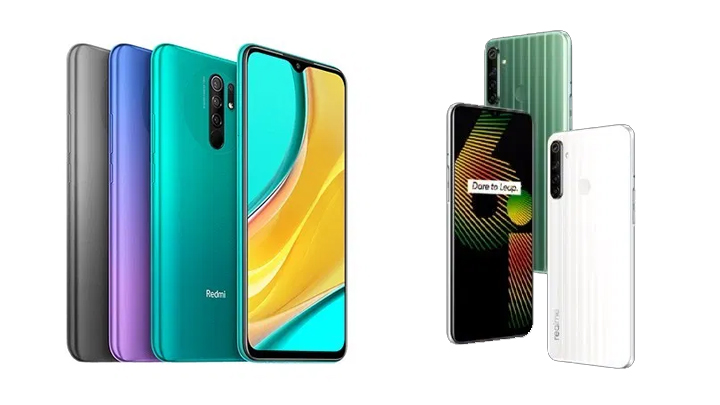 The display sizes of both phones are similar, with the Redmi 9’s size measuring at 6.53 inches and the Realme 6i’s at 6.5 inches. Where they differ is in resolution, with the former having a clearer Full HD+ display and the latter having a lesser HD+ resolution. Both devices are also using an IPS panel, Corning Gorilla Glass 3 for protection, and a waterdrop notch to house the front camera.

Under the hood, the Redmi 9 and Realme 6i runs on MediaTek’s midrange Helio G80 chipset, which is an octa-core CPU running at 2.0GHz, with a Mali G52 MC2 GPU. We already ran our standard benchmarks on the Realme 6i, and got the following results:

While we haven’t tested the Redmi 9 yet, having the same chipset with the same type of RAM and storage should net similar results to the Realme 6i.

The Redmi 9, however, can be outfitted with a massive 512GB MicroSD card, while the Realme 6i only supports MicroSD cards up to 256GB.

As always, we’d like to remind you that the megapixel count is just one factor of the equation. Image processing and software also plays a key factor in the outcome of the photos. While we don’t have sample shots of the Redmi 9 yet, you can check out the Realme 6i’s sample photos in our full review.

Having the same chipset, both devices have similar connectivity options, including 4G LTE, WiFi 802.11 n, Bluetooth 5, and various GPS tracking.

Feature-wise, however, the Redmi 9 trumps the Realme 6i with its inclusion of NFC, and an IR Blaster. The Realme 6i, however, supports reverse charging, which allows users to charge other devices with the smartphone.

Both devices run on Android 10 out of the box, with their own skins laid on top. The Redmi 9 has MIUI 12, while the Realme 6i runs on Realme UI. Both devices do have Google Mobile Support, in case you were wondering.

Powering the Redmi 9 is a 5,020mAh battery while a 5,000mAh battery powers the Realme 6i. They also support 18W fast charging.

The Realme 6i is more expensive than the Redmi 9, but you’re getting a larger storage capacity and camera resolution.

Which phone should you get?

Despite having the same chipset, RAM, camera setup, and battery capacities, the Redmi 9 and Realme 6i do differ in a lot of ways. Those looking for a device for media consumption and gaming would be better off saving money and getting the Redmi 9 thanks to its higher resolution display and large expandable storage capacity. It also has several features that may be important to other users, such as NFC support, and the inclusion of an IR Blaster.

The Realme 6i, on the other hand, is better suited for those looking for a device for social media and photography as well. Make no mistake. This phone can game and stream videos as well, but at less graphical fidelity due to its lower, HD+ display.