Samsung recently launched the most affordable device in its flagship Note 10 lineup, the Galaxy Note 10 Lite. With its price tag of under PHP 30K, we couldn’t help but compare it to another device in the same price range, the Xiaomi Mi Note 10 Pro, launched in the country last December. See how they fare against each other in this specs comparison! 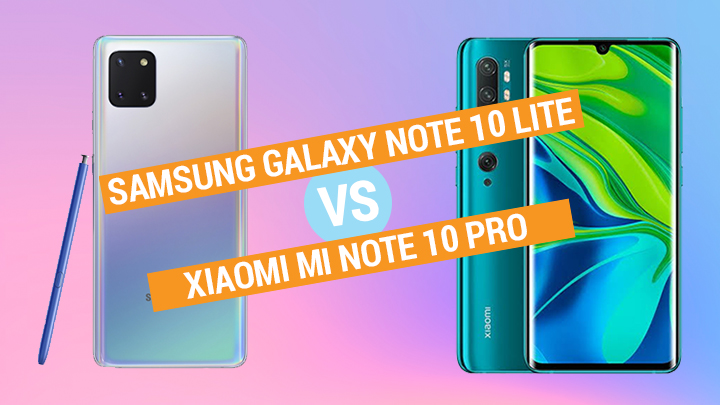 As for processors, Samsung equipped the Note 10 Lite with an Exynos 9810 chipset, launched back in 2018. On the other hand, the Mi Note 10 Pro sports a Snapdragon 730G chipset, launched in 2019. While the Exynos 9810 is two years old at this point, it’s still highly capable as it’s a flagship chipset that powered Samsung’s Note 9 series. SD730G, on the other hand, is a mid-range chipset mainly focused on gaming capabilities. Both devices have 8GB of RAM but vary in storage as the Note 10 Lite offer 128GB while the Mi Note 10 Pro has 256GB. Despite having the smaller storage size, the Note 10 Lite can be expanded all the way up to 1TB. Unfortunately, the Mi Note 10 Pro doesn’t have any form of storage expansion.

Camera-wise, the Mi Note 10 is armed with five rear cameras, composed of a 108MP primary, 12MP optical, 20MP ultra-wide, 5MP 5x zoom, and a 2MP macro shooter. When it comes to numbers, the Note 10 Lite’s triple-rear setup made of a 12MP dual-pixel primary, 12MP ultra-wide, and a 12MP telephoto aren’t exactly a match for that. If there’s one thing in the camera department that both devices can level with each other, it’s that they both have a 32MP selfie camera.

As the Note 10 Lite is a member of Samsung’s Galaxy Note series, the smartphone comes with an S-Pen, a stylus that’s also Bluetooth-enabled. The two handsets have a 3.5mm headphone jack, and also have biometrics features such as an in-display fingerprint scanner and face unlock. NFC is also available on the two devices. The Mi Note 10 Pro does have an IR blaster though, which the Note 10 Lite doesn’t have.

The Note 10 Lite and the Mi Note 10 Pro are both available for purchase in the Philippines, and the two devices both have the same price tag of PHP 29,990. If you don’t mind the two-year-old yet capable flagship chipset and would like to have a larger display, expandable storage, and a stylus that can be used for a variety of things, cop the Samsung Galaxy Note 10 Lite. If you’re more interested in a mid-range chipset that’s suited for the gaming capabilities of a smartphone, a larger battery capacity, the novelty of five rear cameras, and don’t really mind waiting for the MIUI 11 Android 10 rollout, then the Xiaomi Mi Note 10 Pro might be for you.