The next generation of gaming smartphones was revealed just recently courtesy of Xiaomi and ASUS ROG. What we’re talking about is the Black Shark 2 Pro and ROG Phone 2. Let’s see which one is better in term of key smartphone aspects, shall we? Let’s begin! 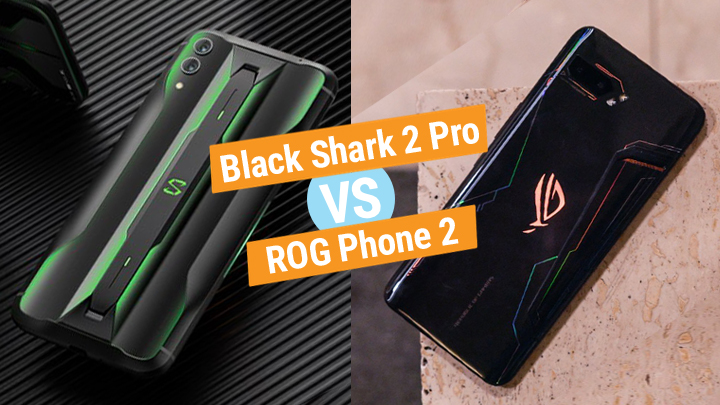 Both gaming smartphones have their awesome designs that scream “gaming.” Which one looks better would depend on your preference, so I’ll let you choose this one.

Moving to the display, both come with an AMOLED panel that shares the same 240Hz touch-sensing feature. However, Xiaomi boasted that it has a 34.7ms screen response speed, which is faster than the ROG Phone 2’s 49ms.

The main difference for the display is that the ROG Phone 2 has a 120Hz refresh rate, which makes a significant difference when it comes to the gaming experience. Moreover, the former sports Gorilla Glass 6, which provides better screen protection.

For performance, you’ll get the latest and top-of-the-line flagship gaming chipsets from Qualcomm, which is the Snapdragon 855+. This chip has a higher clock speed that lets gaming phones like the ROG Phone 2 and Black Shark 2 Pro provide a very smooth gaming experience. Also, both of them sports 12GB of RAM, which is more than enough to smoothly run even the most resource-heavy mobile games to date. If you’re worried about the thermals, don’t worry as both have liquid cooling systems.

For the cameras, both are equipped with a Sony IMX 586 sensor, accompanied by a secondary sensor. For the front shooter, the ROG Phone 2 has a higher resolution. However, we can’t determine yet which one has a better photo quality since it’s not all about the number of megapixels. We’ll know more once we get our hands on both devices.

Feature-wise, the ROG Phone 2 has better audio thanks to its dual stereo speakers and the existence of the 3.5mm audio port. It also has NFC, which is a viable device for digital payments. The two AirTrigger 2.0 haptic buttons located at the right side of the device makes way for a more comfortable shooting game experience. Not only that, but it also comes with various accessories that further enhance a person’s gaming and viewing experience. A unique feature of the Black Shark 2 Pro is its Master Touch 2.0 where you can customize the left and right areas of your screen to do specific commands inside the game.

Between the ROG Phone 2 and the Black Shark 2 Pro, the former wins in terms of battery performance. The former comes with a whopping 6,000mAh battery with HyperCharge technology as well as a 30W QuickCharge 4.0 technology and 10W reverse charging. The latter’s offering isn’t bad either with its 4,000mAh capacity and 27W fast charging. It’s just that ASUS’s creation is better when it comes to battery life and the speed that you can use it again when upon charging it.

Pricing-wise, this is automatically Black Shark 2 Pro’s win. However, if we look at all the advantages above, the ROG Phone 2’s hands down.