Over a week ago, LG announced its next-generation phablet, the LG G Pro 2. This 5.9-inch beast of a smartphone combines the best design and features of the G2 with the size and functionality of G Pro together with a built-in antenna (perhaps for the Korean market). 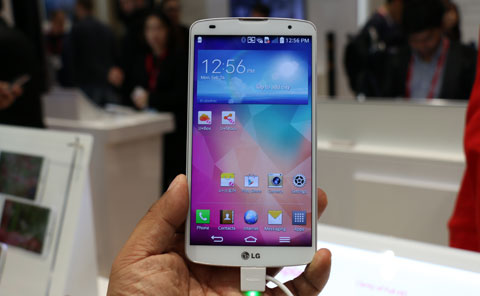 We visited the LG booth here in MWC, Barcelona to check out the G Pro 2. The new design and slim profile makes it look like an over-sized LG G2. In fact, if LG did not name this handset, we would have mistaken it as the LG G3! One of the more prominent fetaures of the G Pro 2 is the Rear Key button and the volume controls that were inherited from the G2. At this size, the Rear Key becomes more practical and useful. The slightly rounded back panel allows for a removable battery and compartment for the micro SIM card and the microSD card slots. It also has a textured finish for better grip with one hand.

The slytus is neatly tucked at the top corner with the 3.5mm audio jack on the opposite corner. There are no other physical buttons on both the left and right sides while the USB charging port is found at the bottom. 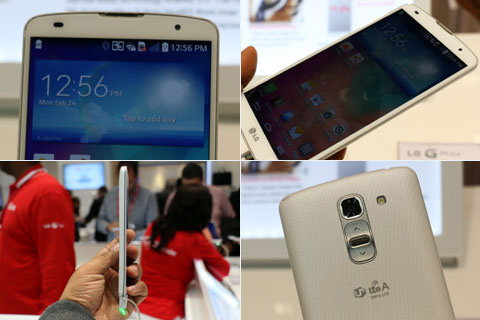 Despite its sheer size of 5.9 inches, the G Pro 2 is still manageable with one hand, thanks to the thin 8.3mm profile.

One of the more interesting features of the G Pro 2 is the KnockCode. This is an improvement over the KnockOn feature found in the G2 which allows the user to tap in the unlock codes even if the display is still of. KnockCode gets you from the sleep mode to the active home screen by tapping the code pattern. 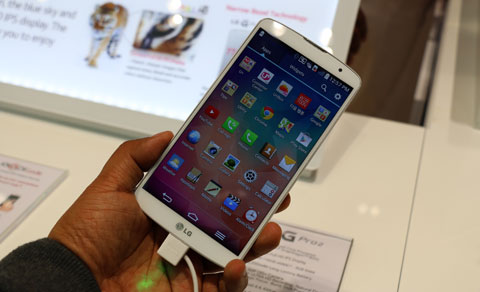 LG still used the same chip as the G2, a 2.26GHz quad-core Snapdragon 800 processor but adds more RAM which is now up to 3GB. There’s also LTE-Advanced which is a much faster mobile connectivity.