Years ago, if you told somebody that you had a laptop to play hardcore games at max settings, most gamers would scoff at the idea and tell you that it can’t ever beat or come close to a desktop. Most of them would tell you that you would have to spend a whole lot of money for you to be able to reach the graphic levels that a desktop could.

All that has changed with the introduction of the new RTX series laptops by NVIDIA. Now, you have the power of choice in your hand as there are over 140 models available that have the new GeForce RTX 3050 and GeForce RTX 3050 Ti graphic cards inside of them. Starting at only USD 799, RTX 3050 laptops add immersive ray tracing to the latest games and, of course, adds a ton of performance with NVIDIA DLSS (we’ll get to more of that later). Compared to the previous series of laptops, DLSS and the latest graphic cards can deliver a 4x boost in performance in games and more than twice the performance in video editing applications. It’s never been more exciting to buy a laptop as the new RTX lineup brings the power back into your hands.

We could just call it a day and say that the newest lineup of RTX laptops is just better in every way, but that wouldn’t give justice to how amazing the technology that is packed inside these laptops is. The NVIDIA Ampere architecture brings record-breaking gaming, creative and AI-powered enhancements throughout the entire lineup of laptops. Who thought that this technology would be available to laptops at around USD 800?

You could play the latest games at high to max settings, or if you’re a serious FPS or MOBA player, you could play the games at the highest frame rates possible. You wouldn’t waste that high refresh rate your laptop comes with because your GPU is up to the task. The new GeForce RTX 30 series laptops also introduce the new 3rd generation Max-Q technologies, which optimize multiple aspects of the laptop’s hardware for peak power and performance, and use AI to dynamically balance resources for optimum operation. This means laptops that are faster have more battery, better acoustics, and are thinner and lighter. Third-generation Max-q technologies enable the thinnest RTX laptops ever, as slim as 15.8mm!

It was always a struggle when you would play a game, and you couldn’t hit even at least 60fps to be competitive. You would either drive your graphics settings down to low (or ultra-low!) or turn down the resolution to 1280×720 just to get the target FPS while sacrificing visual quality. That wouldn’t give you the best gaming experience and would just give you the feeling of always wanting more. That ends with NVIDIA DLSS. This technology is an AI super resolution algorithm accelerated by Tensor Cores on GeForce RTX GPUs. Super resolution is the process of accurately predicting a higher resolution output, like 4k, from a lower resolution output such as 1080p. It allows the game to render at 1080p, thus giving you better framerates, and then uses AI and the game engine to deliver an image quality of a native 4k output.

DLSS is the result of teaching NVIDIA’s AI to generate better-looking games from lower resolutions. After rendering a game at 1080p, DLSS uses its information from its knowledge base of super-resolution image training to generate an image that still looks like it was running at a higher resolution. With GeForce RTX Tensor Cores delivering up to 285 teraflops of dedicated AI horsepower, NVIDIA DLSS can be run in real-time simultaneously with an intensive 3D Game.

This technology is leagues better than old and traditional upscaling technology. Older super-resolution techniques usually lead to artifacts and bugs in the eventual output of the picture. DLSS is designed to work with those errors, and the AI corrects them to create an even better-looking image. DLSS stabilizes the image compared to the upscaled image and even native resolution. These results are only achieved through a combination of motion vectors, temporal feedback, and AI.

This groundbreaking technology is possible with RTX hardware which has RT Cores and Tensor cores. With the newest GeForce RTX 3050 and 3050Ti Laptop GPUs, you can play and have great performance in games using DLSS. From the most played titles such as Call of Duty: Warzone, Fortnite, Cyberpunk 2077, and a whole lot more, DLSS enables you to have the best visual experience while at the same time giving you a competitive edge by increasing your in-game FPS.

To date, there are over 55 games that use NVIDIA DLSS. More and more games are being afforded this technology, such as the introduction of DLSS to Rust, Red Dead Redemption, Doom Eternal, No Man’s Sky, and more. 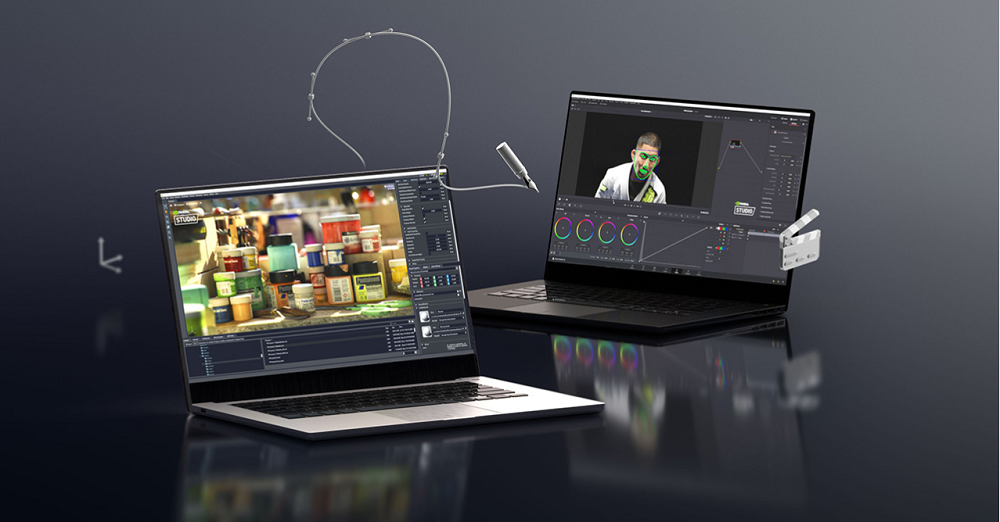 Of course, not every RTX laptop will be used solely for gaming. A lot of us are in the market for a laptop that we can use for creativity. A GPU upgrade is what you sorely need to get work done faster. Now with the new RTX laptops, you wouldn’t even need to do other things while waiting for your video to render.

These laptops accelerate performance and introduce game-changing features. Up to 9x faster video rendering on DaVinci resolve, 4x faster with Adobe Lightroom and Premiere Pro, and up to 24x faster with Autodesk Arnold or Blender cycles with a laptop configured with a GeForce RTX 3080 Laptop GPU.

These laptops aren’t eyesores too. We used to have such bulky and heavy laptops in order to be able to have enough horsepower to be able to do our work properly. Not anymore – the sleek and elegant Dell XPS 15 and XPS 17 with edge-to-edge displays or the Lenovo Ideapad 5 Pro redefines what a workhorse laptop should look like. These laptops that have stunning, color-accurate displays, thin designs, and powerful internal specifications will surely take your creative game to the next level.

With the advent of the COVID-19 pandemic the past year and a half, a lot of us needed to adjust with the need to have a great setup for a conference and video calls. Using AI and the Tensor Cores found on GeForce RTX hardware, NVIDIA Broadcast is able to eliminate noise. Do you have a colleague so proud of how loud his mechanical keyboard clicks are? Or do you want to cut out your family members talking while you are working from home? NVIDIA Broadcast does this for you, improving the clarity and efficiency of every virtual meeting.

If you’ve also wanted that bokeh effect in your video calls, NVIDIA Broadcast can blur your background to give you that professional-looking setup wherever you are. NVIDIA Broadcast has been upgraded with new features: noise removal has been improved to filter out dogs, cats, and even insect sounds, room echoes can be eliminated, and so much more. From gaming to virtual classes or even live-streaming, NVIDIA Broadcast has what you need to make your online life easier! The best part is it’s all for free!

Laptops are an essential part of student life. In any course, you would need a laptop to get work done, some courses more than others. Science, technology, engineering, and mathematics (STEM) courses need hardware-accelerated laptops more than most.

NVIDIA is not just all about gaming. Students need these laptops to get their classwork done faster. GPUs are becoming an essential part for students in these fields of study. From rendering their work, simulating a new test, or trying out a new program, these laptops are more than just word processing machines.

Now, more than ever, laptops are an essential part of our daily lives. From students to professionals, your laptop should be able to fit every part of your daily and digital lives.

NVIDIA’s Ampere-powered GeForce RTX laptops have come at just the right time. With technologies that take laptops to the next level by delivering amazing graphics capabilities, super-fast performance, great battery life, and a whole lot of other improvements, these laptops are a force to be reckoned with. It does also help that these laptops aren’t the big beasts they once were. Looking super sleek and modern, these laptops also are very much eye-candy.

You can’t go wrong with the latest RTX-powered laptops, starting at just USD 799; there’s a laptop for everybody. NVIDIA’s GeForce RTX Gaming Series laptops have come to seriously up your game, from everyday work to hardcore play.