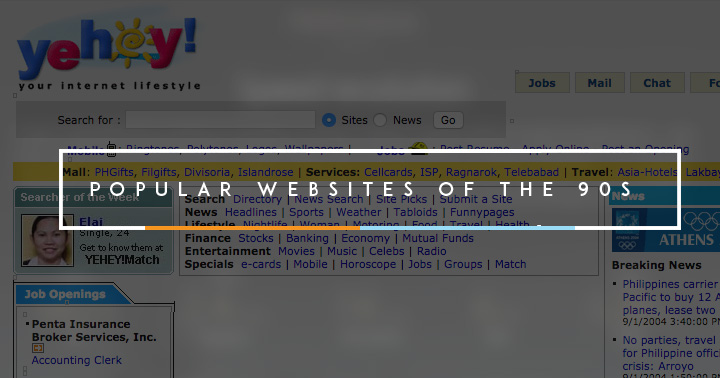 The news that what remains of Yahoo! will eventually be renamed to Altaba is a sad day for those of us who grew up in the 90s and getting our very first Yahoo! email.

Yahoo! is perhaps one of the last remaining websites or internet services we grew up with. In a country like the Philippines where internet access is slow and expensive, we still managed to become one of the top users of Yahoo! So yes, we’re heavy internet users.

In case you didn’t know, there are actually a few other well-known Filipino websites that were very popular back then. Let’s bring you back about 15 to 20 years from today.

Yehey.com (1996). The biggest and most popular Filipino portal that started almost at the same time as the internet became commercially available in the Philippines. Filipino founders followed in the footsteps of Yahoo! and created a local version that had great potential, first-mover advantage, and popular support. After investments dried up, Yehey went thru several transformations and even planned an IPO in 2007. Today, the website is no more and Yehey! Corporation has been renamed to Apollo Global Capital, Inc. with its primary purpose changed to that of a holding company.

EDSAMail (2000). The service started out as a free email service that’s supported by ads. When the business model did work, they moved to a paid service (Php365/year). That did not pan out as well since global email services like Google and Yahoo were offering better services for free. Today, EDSAMail is just a simple, rarely updated blog.

PinoyCentral.com (2000). With the growing popularity of portals, ABS-CBN Interactive created PinoyCentral in 1998 to be the entertainment portal of the TV channel. Due to huge operating costs and not enough online revenues, the website suffered the same fate as rival Yehey.

ClicktheCity.com (2000). One of the first entertainment and lifestyle guide dating all the way back to 2000, ClicktheCity managed to evolve and survived the first internet bubble. Today, it continues its original mission and expanded to included a well-maintained blog.

Trabaho.com (1996). Trabaho.com was among the first job portals in the 90s. It was a simple, straightforward site that manually lists new local job openings and continues to do so to this very day. Along with the now defunct Yehey.com, Trabaho.com is one of the oldest and longest-running websites in the Philippines.

PinoyExchange.com (1999). Before the time of social media, the best place to socialize, meet people, discuss and engage in various topics is thru forums. Pinoy Exchange was the pioneer in this area and it became so huge and popular, the website also suffered outages and congestions. Despite that, the community thrived and the business survived the dot-com bubble. Today, PEx, remains to be the same old forum and it’s not showing any signs of retiring anytime soon.

There were many other really good websites and online services back then (Tsinoy.com, PhilMusic, PhilWeavers, etc). Some were introduced too early for its time while many others failed to adapt and evolve. We could learn a lesson or two from them.