What Was Your First Smartphone?

Smartphones these days have all sorts of features — from almost full-screen displays to quad cameras, pop-up mechanisms, huge storage space, massive battery capacities, and more. While most of us now have devices with the current technology, do you ever look back and wonder about your first ever smartphone? Do you ever sit back and think just how different your first device was from the current one that you have? We sat down with some members of the team and asked them, “What was your first smartphone?” Check it out! 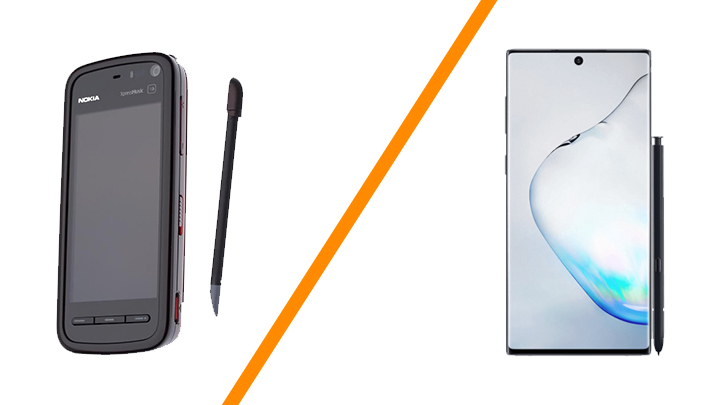 Our Managing Editor Louie’s first smartphone was the Nokia 5800 XpressMusic, which he got in 2009. The Nokia 5800 XpressMusic had a 3.2-inch 640 x 360 resistive touchscreen, which already seemed large at the time; it also had a stylus, a 3.15MP rear camera, and ran on Symbian OS. Ten years later, Louie now owns a Samsung Galaxy Note 10. He notes, “It’s quite funny (owning a Note 10), considering that this is just the second time I owned a smartphone with a stylus after the Nokia 5800.”

Comparing the two devices, Louie stated how smartphones had come such a long way over the years, evident with the improvements made in size, quality, as well as features and dimensions. Rather than merely being tools for communication and multimedia consumption, smartphones have also become productivity tools.

See also  Watch: How To Improve Your Smartphone's Battery Life 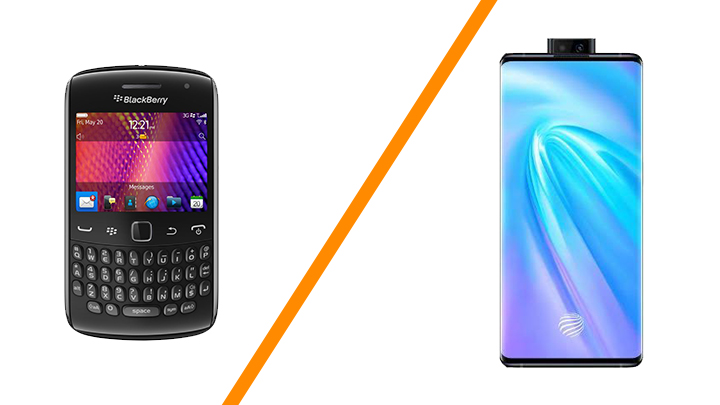 Justine’s first smartphone was the Blackberry Curve, which first launched in 2007. The Blackberry Curve had several variants, but all of them had one thing in common, which was its QWERTY keypad. Fast track to now, Justine is using a Vivo NEX 3, launched around October 2019. Asked what made her first smartphone different from her current one, “Their distinct form factors,” Justine answers, with the Blackberry being smaller than the NEX 3. Not only that, but their displays are different, too, as well as their overall interface.

Despite having the NEX 3 now with its pop-up camera, Justine does miss the QWERTY keypad of the Blackberry and its unique light indicator. 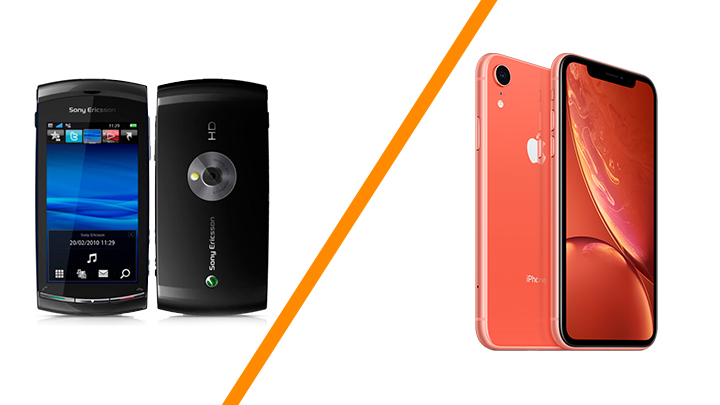 The Sony Ericsson Vivaz was Alyza’s first smartphone. Released in 2010, the Vivaz had a display measuring at 3.2 inches, 75MB internal storage that could be expanded up to 32GB via microSD, an 8MP rear camera, and ran on the Symbian OS. Currently, Alyza’s daily driver is the iPhone XR. Compared to her current device, Alyza mentions that the Vivaz had a cooler design with its rear reminiscent of digital cameras at the time. Launched in 2014, the Microsoft Lumia 535 was AJ’s first smartphone. With a display size of 5.0-inches and protected by Corning Gorilla Glass 3, the Lumia 535 had 8GB internal storage, 1GB RAM, 5MP rear camera, 5MP selfie camera, and ran on the Microsoft Windows Phone 8.1 operating system. At the moment, AJ is using the recently-launched iPhone 11 Pro, which has a stark difference with the Lumia 535 in terms of price, size, OS, and display. “I don’t miss my first smartphone as the OS had limited app support,” AJ says, admiring her current device. 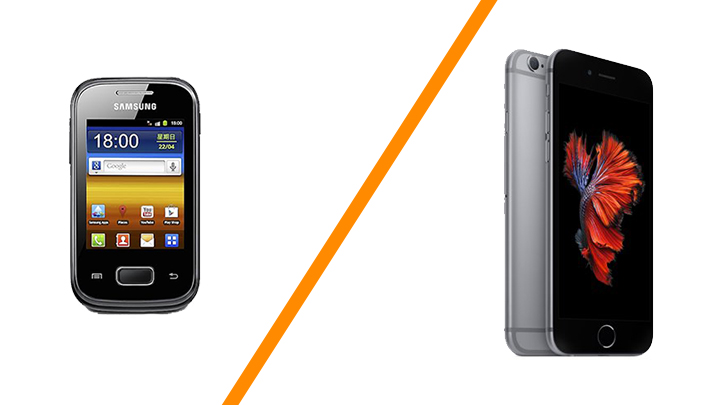 As for me, my first smartphone was the Samsung Galaxy Pocket S5300. Released in 2012, the Pocket S5300 had a palm-sized form factor, a screen measuring at 2.8-inches, a single 2MP camera on the rear, and ran on Android 2.3 Gingerbread. It didn’t even have a front camera! At present, I have an iPhone 6s and have been using it since 2016. The Pocket S5300 and the iPhone 6s differ in a lot of things, such as the size of their displays, cameras (especially the front camera as the 6s has one), and most notably with their operating systems. I started from Android and moved on to an Apple device. Do I miss anything about the Pocket S5300? Probably the small, fits-in-your-hand form factor, but that’s about it. 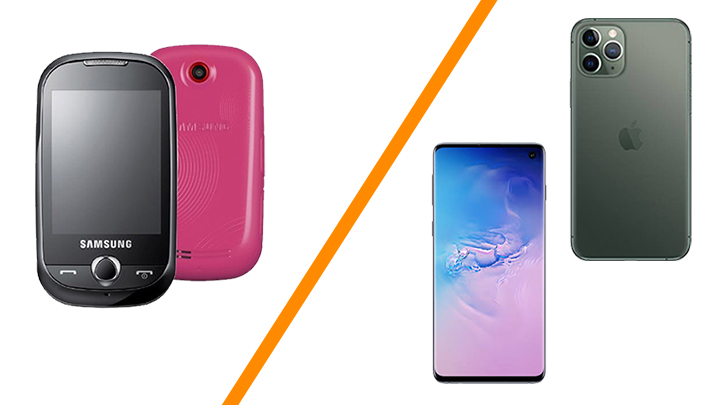 Miguel’s first smartphone was the Samsung Corby, launched in 2009. The smartphone had a 2.8-inch screen, 50MB internal storage, a 2MP rear camera, and ran on the Samsung Touchwiz 1.0 OS. These days, Miguel has two current smartphones, the Samsung Galaxy S10 and the iPhone 11 Pro Max. When it comes to differences, Miguel states that they’re different in terms of accessibility.

“Back then, having a ‘smart’ phone was somewhat of a status symbol. Nowadays, having a smartphone means eyes glued to display wherever you go. Memes coming from the left, SMS scammers from the right.” He added, “I guess what I’m trying to say is too much technology can also ironically disconnect people from each other, and I hate that.” 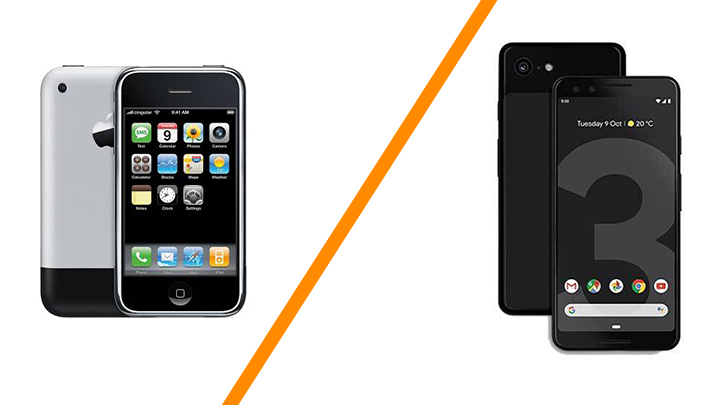 The first generation iPhone was Joey’s first-ever smartphone. Released in 2007, the iPhone’s gen 1 had a 3.5-inch screen, a physical home button, 4GB/8GB/16GB storage variants, a 2MP rear camera, and ran on the first iteration of the iOS. With his current device, the Google Pixel 3, Joey notes that a lot has evolved since 2007, and everything’s several times bigger and better now. If there’s anything he misses from back then, Joey expresses, “I wouldn’t say I miss the phone per se, but I do reminisce the time; when we didn’t rely on our smartphones as much as we do nowadays.”

What about you, what was your first smartphone, and what’s your current one? Share it with us in the comments!

my first smartphone is..Sony Ericsson Neo V, now i have a Samsung S10e.
i like small phones

Sony Ericsson Arc S to Realme 3 Pro.. What I did miss with the Arc S was how gorgeous was it physically. Back then, Sony Ericsson, for me, had the best looking phones..

First smartphone I owned was the Nokia 5250, which I truly loved, in 2011. It had a stylus and it was my first phone with a Merriam-Webster dictionary haha. Unfortunately, it was destroyed after it fell onto a bowl of soy sauce. I still mourn it to this day. It got replaced with the significantly worse Nokia Asha 306 in 2012, which was then replaced with an LG G3 Beat, my first Android phone, in 2014. Both those phones never held a candle against the 5250. Replaced the G3 Beat with a Nokia 7 plus, my current phone, in 2018 after the LG got unbearably slow.

does the nokia 6120c count as a smartphone? I had one back in 2008, physical keypads, used it for email, calendar scheds, basic spreadsheet viewing, document viewing, and was even able to install some basic apps. Only thing missing was an accurate map app and GPS which i found and used in my next nokia, the 5800 musicexpress. I used it’s map app and lost my way a few times hehehe. Now using Nokia 7plus for office tasks.

My first smartphone was Samsung Galaxy Y Duos Lite. Which is still working I dont know how.