From what was once a $0.99 game, Madfinger Games Inc. has made the popular game Dead Trigger now free for Android users because of piracy.

In a recent statement they made on their FB page, the team behind the addictive zombie shooting game announced that theyâ€™re forced to make the game because of big time piracy. 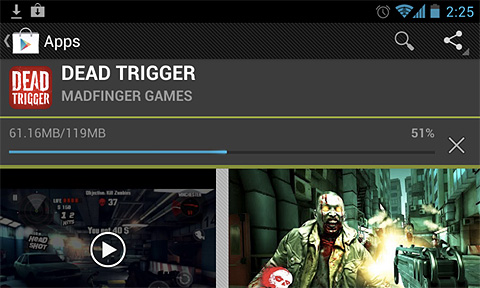 Staying true to their gaming roots, they also mentioned that the game, even though it’s going to be free, will remain Free-to-play and will not be Freemium. Hats off to Madfinger!

Although the concept of the game is not as fresh nowadays, Madfinger was still able to incorporate their own personal touch to keep the game interesting and addictive and kudos to them for doing a splendid job at it.

For a $0.99 game (now Free), it’s just disgusting to see people pirating the game. We just hope that things go well for the team following this bold move of making the game free.

Unquestionably imagine that that you stated. Your favourite
reason seemed to be at the net the easiest thing to have in mind of.
I say to you, I certainly get irked while other people
consider issues that they plainly don’t realize about. You controlled to hit
the nail upon the highest and also defined out the whole thing with no need
side effect , folks could take a signal. Will probably be back to get more.
Thanks

Tips. Privileged everyone I came across your web site accidentally, using this program . surprised the reason that crash could not came into being previous! We saved as a favorite them.

I really don’t have any idea generate an income wound up here, nonetheless imagined this distribute was good. I do not know your identiity even so definitely you’re going to any well-known tumblr if you aren’t presently. Cheers!

my sister love it so much… mas malaki ang screen mas exciting! when i play it sometime i get startled i scream. lalo na kapag the zombie grabs you and face to face nyay..hay nako so scary almost drop my note…

Most, if not all, Android devices has some way to connect to the internet (either via Wifi or 3G). Why don’t they implement games which users serial codes, which then get checked online from their (developer) databases, before the game can run? It could be that simple to combat piracy.

DRM is what gamers(including paying ones) hate the most

Not everyone wants to connect to wifi/36 just to play a game. Especially a mobile a game where the idea is to play anywhere on the go. Forcing people to find a wifi spot/3G or not being able to play it offline defeats the purpose of a mobile game. That’s the same issue players has with DIablo 3

if they wanted profit, they should’ve stuck on the iOS platform. i don’t think they were aware that the open source platform that is android is where anything, and i mean anything is possible. so they should have anticipated that.

on google’s side, however, i think they would have to implement some kind of mechanism to keep the play store profitable. paano nga naman gaganahan ang mga devs with an open source, multi-OS version, multi-manufacturer, multi-spec environment when their software will simply be cracked and shared in a file-sharing website for everyone’s exploitation? samantalang sa kabila, isang OS version lang at iilang tablets and phones at siguradong mabbayaran ka.

please don’t get me wrong, i’m an android user… but if this trend will continue, iOS will always be the first to get the latest games and apps. heck they might even consider wp7/8 next after iOS before making one for android.

But sir, diba iOS games can also be pirated?