AMD kicked the 2014 off by unveiling the fourth generation of their desktop APU line called Kaveri. Among the first new accelerated processing units that were launched was the AMD A10-7850K which we will be reviewing in this post.

What’s in the box? 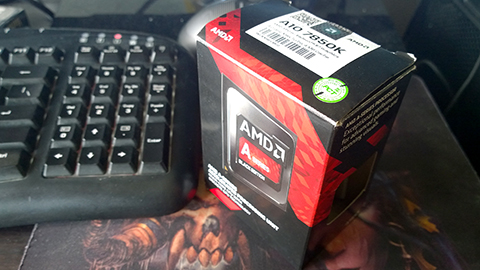 AMD’s APUs have been primarily targeted at gamers on a budget. This explains why most of the talkpoints revolve more around the processor’s integrated GPU (iGPU) and less about its CPU cores.

With the arrival of Kaveri, however, AMD has made respectable strides to balance the performance between its Steamroller-based CPU and, in the case of the A10-7850K, its integrated R7 Series GPU. But instead of treating the two independently, the chipmaker decided that it would be best (and more beneficial for the users) if the two can work as a team and tackle tasks at the same time. 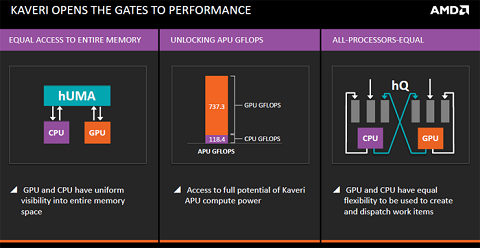 This gives birth to the three core feature of Kaveri, HSA (Heterogeneous System Architecture), hUMA (Heterogeneous Unified Memory Architecture) and hQ (Heterogeneous Queueing). We’re not going to tackle these three features in-depth, but what HSA basically does is that it speeds up the overall compute process by strategically distributing the workload to both the compute cores and iGPU (hQ).

hUMA, on the other hand, allows the CPU and GPU to simultaneously access to the entire memory space which cuts down the buffer time caused by copying data between the CPU and iGPU.

Apart from improving the coherence between the CPU and GPU, AMD also revamped the Kaveri APUs’ ability to handle Audio and Video tasks by equipping it TrueAudio found on other GCN-based GPUs and Sony PlayStation 4, as well as the latest iteration of Video Codec Engine (VCE 2.0) and Unified Video Decoder (UVD 4) technologies.

TrueAudio, based on the chipmaker’s literature, is a fully-programmable on-die hardware component that’s designed to off-load the Digital Signal Processing tasks from the APU, thus resulting to a more efficient audio processing (compared to CPU) and a more life-like audio experience. 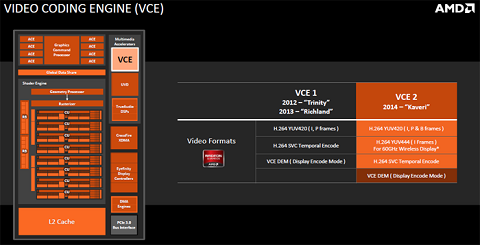 Meanwhile, VCE 2 and UVD 4 are integrated into Kaveri APUs to improve its capability to handle video encoding/decoding and add support for both H.265 and HEVC formats, as well as AMD Picture Perfect. In addition to this, Kaveri APUs supports decoding for VC 1 codec, not to mention support for H.264 encoding and encoding with improved error efficiency and additional support for YUV444 color space.

Rounding up the list of Kaveri’s features is AMD’s low-level API called Mantle which promises to boost a GCN-based GPU’s performance by up to 45% on supported games (Battlefield 4) compared to DirectX 11. This is achieved by reducing the load on the CPU by allowing game developers to write codes using the Mantle API that would instead maximize the Graphics Core Next hardware found inside newer models of Radeon GPUs which, theoretically, should result to faster performance and smoother game play.

And since we’re in the topic of performance, let’s take a look at what kind of speed of we can expect from the A10-7850K. Because this APU is primarily intended for gamers on a budget, we tested quite a few major titles in order for us to get a good feel of how it fares in 1080p gaming. 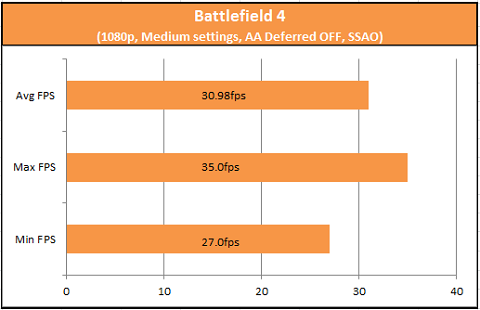 We kick things off with Battlefield 4 which also happens to be one of the first few popular titles that makes use of Mantle API. In our test, the R7 Series GPU was able to spit out an average of almost 31fps. 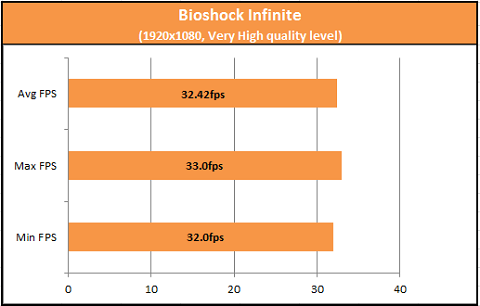 Next up we have another first-person shooter title, BioShock Infinite. Much like in BF4, the A10-7850K’s iGPU was able to provide us with above 30fps resulting to a decent gameplay. 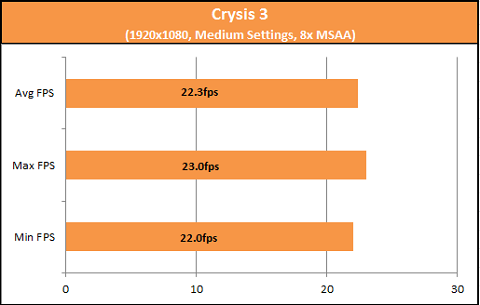 Unlike in the previous two titles, the R7 Series GPU inside the A10-7850K struggled to reach 30fps on Crysis 3. It still playable at 22fps, but we think that it’s best to lower down the MSAA a bit in exchange for extra fps. 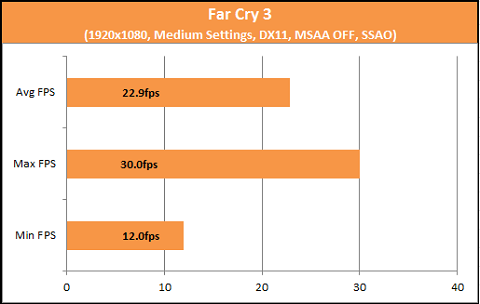 Next up we have Far Cry 3. Based on its automatically-generated presets (with MSAA turned OFF), the processor’s iGPU topped at 30fps and gave us a playable frame rate of almost 23fps on average. 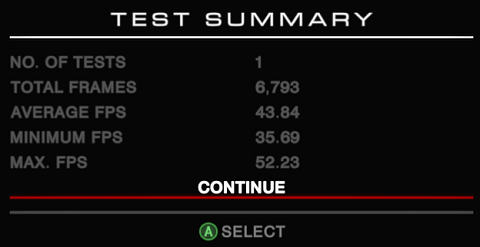 We took a quick break from the all the FPS action and played Grid Autosport on our rig. The A10-7850K fared pretty well in this racing game and was able to spit out an average of almost 44fps. 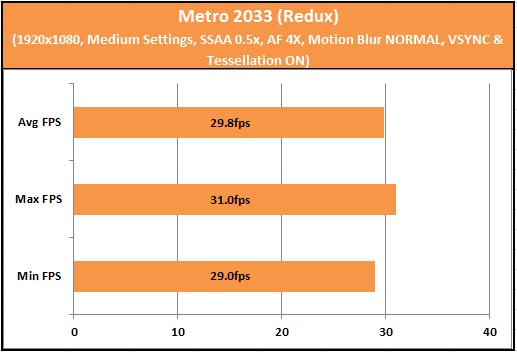 The second to the last FPS title that we tried is Metro 2033 Redux and the R7 Series iGPU actually fared pretty decent in the game, sitting around the 30fps mark in the majority of the game. NBA 2K14 is one of those popular game titles that’s actually not that resource-heavy and can be comfortably played in a low-end to mid-range system setup. As such, it’s not surprising to see the A10-7850K’s iGPU to reach above 50fps even at high settings. 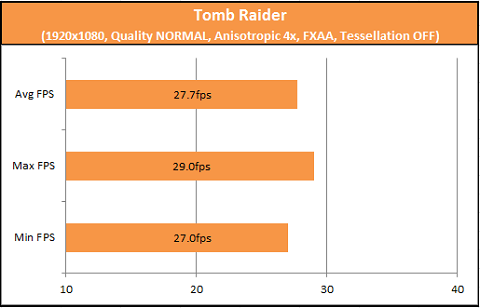 Rounding up our list is Tomb Raider. Much like the majority of the FPS titles in our list, the A10-7850K gave us a decent frame rate which hovered around the 29 – 32fps mark.

In addition to measuring the frame rate in some of the popular game titles, we also ran a few synthetic benchmark tests on the AMD A10-7850K. Here are the results we got: 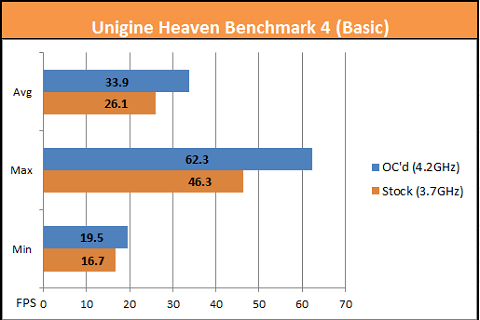 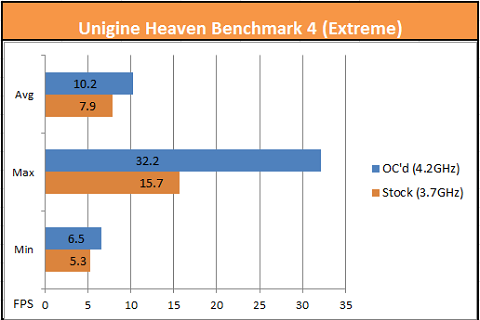 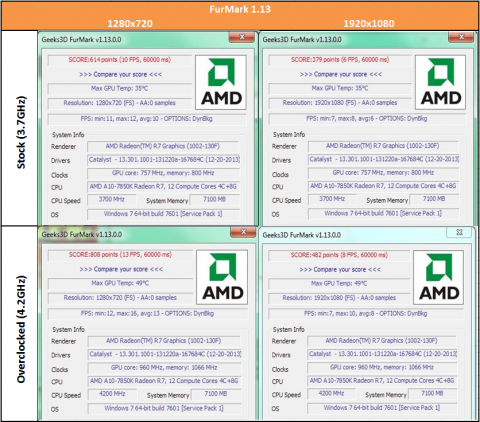 By and large the AMD A10-7850K was able to deliver a pretty decent performance both in CPU-related tasks and in gaming, but it’s on the latter where AMD’s current flagship APU really shines thanks to the hardware/software tweaks, particularly HSA, that the chipmaker has implemented on their processor.

On almost all of the popular titles that we tried on this processor, the R7 Series GPU embedded on the A10-7850K was able to deliver respectable frame rates in medium settings and even exceeded the 30fps threshold in some of the non-graphics-intensive games like NBA 2K14 and GRID Autosport.

To top it all off, the APU is peppered with some of the latest and greatest technologies that AMD has to offer. Sadly though, users currently can’t take full advantage of the benefits that Mantle and TrueAudio have to offer since there’s currently not a whole lot of a popular game title that are written in the said API and DSP technology. Nevertheless, it’s good to have these features on there because if and when game devs decide to release games that support such features, your system will be ready for it, not to mention it adds more bang for the buck.

Speaking of money, here’s where things get a little tricky. The AMD A10-7850K’s market price currently ranges between Php7,000 – 7,500 and for roughly the same price (or less) users can opt for a more capable processor in the form of AMD FX-8320 Black Edition.

That being said, we’ll end this review by saying that it all boils down to your budget. If you can afford to shell out five to seven grand more for a decent graphics card, then the FX-8320 should be a no-brainer. But if your current budget is limited and you still want to be able to play popular games on your rig at decent frame rate, then the A10-7850K should be a viable choice.

* Decent performance in popular FPS titles
* Support for Mantle and TrueAudio out of the box
* Improved performance for video encoding/decoding
* HSA technology FTW!