AMD’s Accelerated Processing Unit (APU) has been around for quite some time already, but it’s only recently that ASUS released the Crossblade Ranger – the company’s first Republic of Gamers (RoG) motherboard that supports both A88X chipset and FM2+ socket. Head past the break to check out our full review of this gaming-centric MoBo. As soon as we took the Crossblade Ranger out of its packaging, we already saw some undeniable traces of its RoG lineage. Of course the ROG’s trademark Red and Black paintjob is already a giveaway, but apart from that, we saw some components that we don’t usually see on typical boards (more in this later). In terms of the overall design, the Crossblade Ranger looks very similar to some of the Z97 boards under the ROG lineup, particularly the ROG Maximus VII. The FM2/FM2+ processor slot in the middle and is flanked by four (4) one-sided RAM slots on the right and a neatly designed Extreme DIGI+ III VRM on the left which comprises of eight (8) alloy chokes neighbored by 10K Black Metallic capacitors and NexFETTMMOSFETs tucked underneath the two heat sinks. Now over to the far right side we’ll see a red USB 3.0 header right beside the slot for 20+4 ATX power connector. Go upwards a little bit and you’ll be greeted with a pair of miniscule buttons for Reset and MemOK! These buttons, coupled with the fairly large “Start” button, LN2 Switch and POST display (Q-Code) should be a welcome addition to this board’s feature set, especially for overclocking enthusiasts. 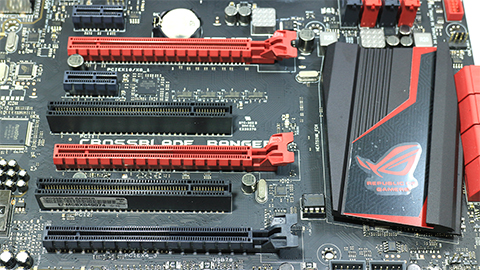 Placed around the edges of the of the bottom-half of the board are headers for (arranged in order from left-to-right) audio, TPM, ROG_EXT, Chassis Fan (CHA_FAN2), a pair of USB 2.0 and for your case’s front panel lights and buttons. In this area you’ll also find a trio of tiny buttons for Sonic Soundstage, KeyBot 2.0 and Clear CMOS. 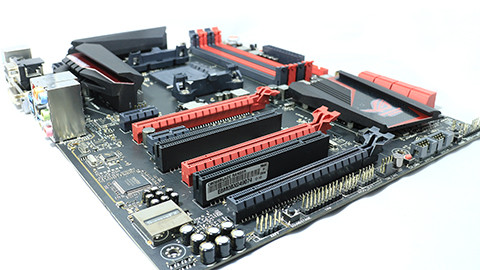 Lastly we have the SupremeFX 2014 chip on the bottom-left corner of the board with a set of ELNA capacitors. There’s a yellow line that runs from this section all the way to the rear I/O panel which lights up (Red) when the board is powered.

Of course, having a well-designed motherboard is just half story. So ASUS made sure that the board is accompanied by an equally sick BIOS setup, as well as bundled software to complete the gaming/tweaking experience.

Considering that this board is designed for gamers and overclockers, we’re not totally surprised by the sheer number of tabs, menus and presets that the default BIOS has to offer under the “Advanced Mode”. 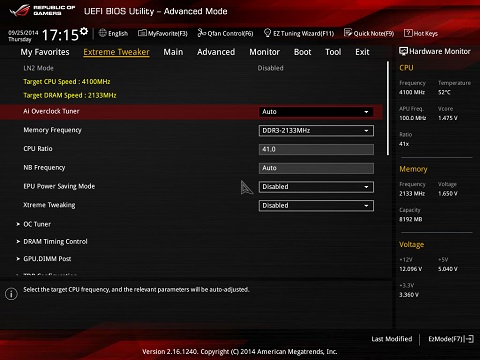 In here, one can pretty much alter/control all of the components that are attached to the board; from the fan speed, RAM timings and the frequency of the processor. All of these various presets are organized in such a way that even new ROG users should be able to find it without breaking a sweat.

Speaking of new ROG users, we’re also delighted to report that in addition to the Advanced Mode, ASUS has also added EZ Mode in the mix. Similar to Advanced Mode, users are also given an overview of their current system setup on EZ Mode, but instead of overwhelming them with a plethora of tabs and presets, the layout is less cluttered and more noob-friendly. 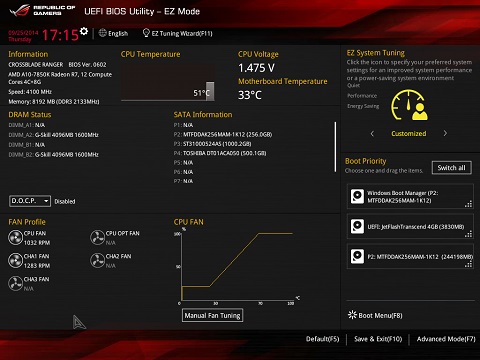 EZ Mode also allows user to configure their system to give it a slight boost, minus the complicated calculations and sound understanding of the components that the process usually entails/requires. Users can select from three pre-defined presets (set to “Normal” by default) on the upper right corner of the screen which is labeled EZ System Tuning.

In addition to the intuitively-designed BIOS, the Crossblade Ranger also comes with ASUS AI Suite III which also allows user to do some minor tweaks to some of the settings outside of BIOS. One easy way to do it is through the tool called 5-Way Optimization which tunes your peripherals to match the speed that you’re gunning for. 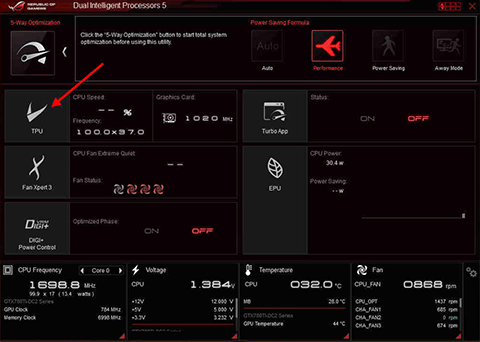 Next up we have four (4) pre-defined settings on the top-right hand corner that users can select in order for the system to automatically adjust the settings which, theoretically, should suit the user’s current need.

Down at the middle section, we have additional menus that we can use to configure our settings. We have the TPU, Fan Xpert 3, Digi+ Power Control, Turbo App and EPU. Lastly, user are given an overview of their current system setup which includes CPU Frequency, Voltage, Temp, and Fan Speed down at the bottom portion of the AI Suite 3 window.

Before we reach the end of our review, we want to highlight some of the additional features that come with the Crossblade Ranger which you wouldn’t normally get on a non-ROG motherboard or competing boards in the same class. 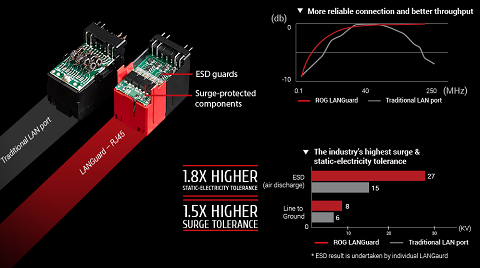 This board inherits some of the features that are already present on some ROG boards, particularly those on a higher tier. One of which is the fancy Intel Gigabit Ethernet that’s equipped with ASUS LANGuard, which primarily protects the board from electric surge and improves the overall throughput, as well as GameFirst III which allows user to optimize how the data is being transferred to the PC and allocate more bandwidth if needed. 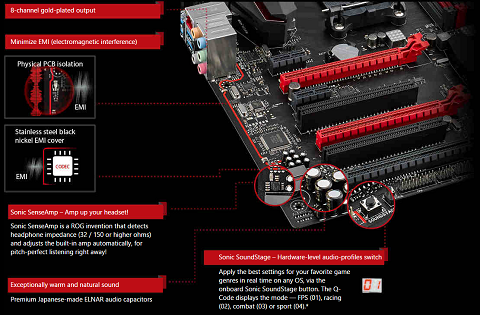 The two other nifty additions to the Crossblade Ranger’s arsenal are the Sonic Radar 2.0 and the latest iteration of the SupremeFX which are staple for ROG MoBos. These two add-ons, together with the additional components like the Japan-made ELNA caps, shielded EMI and a dedicated Soundstage button, are geared towards improving the overall sound output of the board for a complete gaming experience.

Rounding up the list of the Crossblade Ranger’s extra features are the KeyBot and RAMDisk. The former adds more functions to an otherwise plain USB keyboard by allowing users to assign Macros and shortcut keys to it.

RAMDisk, on the other hand, allows user to convert unused RAM into an extremely-fast temporary storage device.

It took ASUS quite some time to release an ROG motherboard for the FM2+ socket, but when they did, they made sure that they got all the bases covered and that all the waiting will not be laid to waste. That is exactly what the company did with the ROG Crossblade Ranger which, in our opinion, is currently the best FM2+ motherboard that money can buy.

It’s got all the bells and whistles that one would look for in a gaming board, not to mention additional features on the side for a truly immersive gaming ride. Not only is it functional, but it’s also an eye-candy which we’ve come to expect from an ROG mobo.

The only thing that may disappoint potential buyers is its price. The ASUS ROG Crossblade Ranger is being sold locally for Php8,990 which makes it the most expensive FM2+ motherboard currently in the market. But if you have extra cash to burn, we think that this board should be a good investment.