Epson continues to be number one in POS for 5 years

Epson was yet again named the number one Point-of-Sale (POS) printer manufacturer in Southeast Asia by International Data Corporation for five consecutive years in a row, showing the company’s commitment to customer satisfaction.

Results from 2013 showed that the company held 45% market share in the entire Southeast Asia POS printer market. Simply put, almost every other POS printer purchased in 2013 was from Epson. 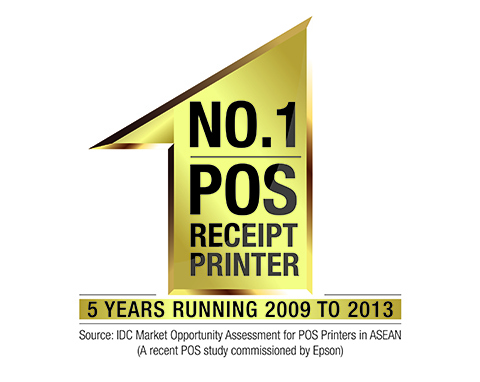 In addition, Epson maintains its lead from other printer manufacturers in all markets where the Japanese company has presence. In Singapore, they hold 61% of total market share, while Epson in Indonesia holds 54% of the market for POS printers. Both here in Philippines and Malaysia, they hold a 1-in-3 share with 37% and 33%, respectively. Lastly, Epson Thailand holds 45% of the POS printer market.

“POS systems are the backbone of many businesses from F&B to retail and can have a very big impact on things like productivity, efficiency and overheads, which is why we put so much effort into creating the best, most user-intuitive systems we can, and the results show in this great honor we have received,” says Koichi Endo, Managing Director of Epson Southeast Asia. “Being the number one POS printer for the past five years, however, does not mean we can rest on our laurels. We have a responsibility to our customers to live up to, and exceed their expectations. It is this dedication to innovation that has led to Epson being named Southeast Asia’s number one POS printers, and it continues to be a great honor.”

that ad before the page loads pisses me off