As a gamer and creative, choosing the right laptop can be quite difficult – especially if you have no desktop. After all, the necessities for content creation do not always align with the need for gameplay. And, while there are laptops that balance the essentials for both gaming and studio performance (i.e. Razer Blade 15 Studio Edition), they leave little space for other features like portability or long battery life. Luckily, while we may still be a few years off from entirely solving these problems, Asus is already forefronting the tech to eradicate the need for separate devices for individual needs. 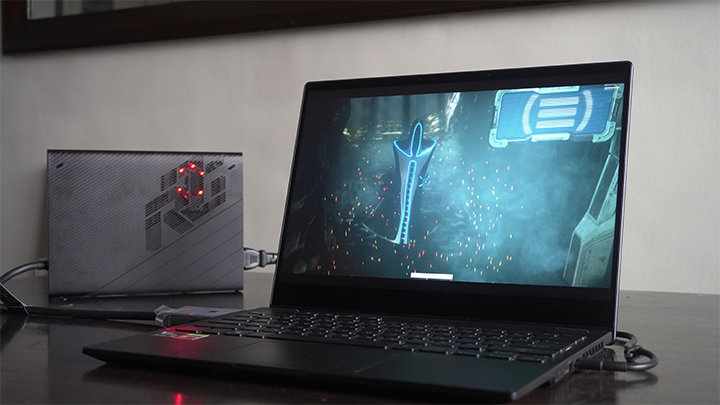 Marketed as the next-generation laptop, the Asus ROG Flow X13 boasts impressive specifications that rival even top-tier gaming desktops. And, with a weight of only 1.3kg and a thickness of 15.88 mm, it makes leading portable gaming laptops like the Blade Stealth 13 look oversold. Its 360° convertible design allows it to flip through four different physical modes, ranging from stationary to on-the-go tablet use – which seems to balance the issue of portability versus versatility.

But, the real highlight of this laptop is its pre-bundled external GPU, the Asus ROG XG Mobile. Outfitted with the new RTX 3080, this plug-and-play GPU sports high-end graphics performance combined with a lightweight build and a multifunctional interface hub via Asus’ single proprietary interface. And, while the debate is still up whether this “accessory” should be the new staple, one thing is for sure: it’s worth taking a closer look into.

Now to assess the elephant in the room — Asus, for every right reason, is redesigning the concept of what an external GPU should be. It combines a compact form factor with power, speed, and precision. Its built-in RTX 3080 GPU card is clocked at 1810MHz at 150W, allowing for smooth and vivid gameplay. While its unique single proprietary interface avoids the use of common bottlenecks, so you can harness more reliable power and speeds. It also provides for multifunctional capabilities such as a charging brick and multi-interface hub. Ultimately, eliminating the necessity of buying more accessories to replicate the desktop computer experience. 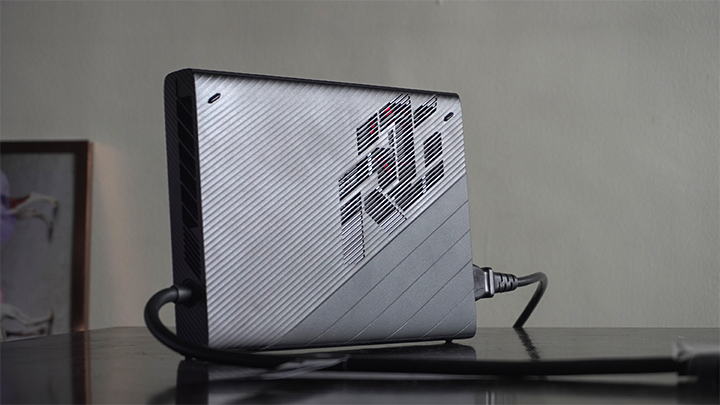 Made for portability on-the-go, it weighs only 1kg, making it easy to carry with you in most cases. It also gives you the option of extending your screen space with its HDMI 2.0a and DisplayPort 1.4 with an output resolution of 4K UHD resolution output. It uses a single proprietary interface that allows it to triple as a charging brick and multi-port interface hub, solving the problem and bulk of having too many devices plugged in.  And if you’re worried about heating issues, its textured groves are not only for aesthetics but also doubles as robust cooling vents for its specially engineered silent fans.

From a designer’s perspective, the Flow X13 looks impeccably sleek. Asus uses a selection of high-quality materials for its Flow X13, such as magnesium and aluminum, but also plastic, which we find on the base unit’s top-side. It’s matte in texture so it feels good to the touch, it can pose as a fingerprint or smudge magnet (especially with oily fingers) 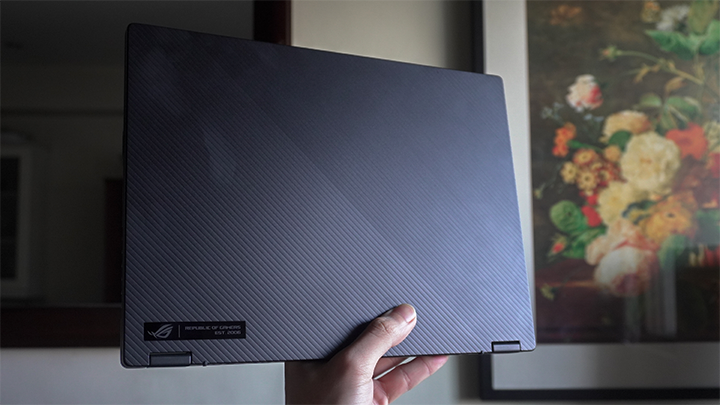 Its body is engraved with what Asus calls the “Gravity Wave Pattern” all around, which speaks of the fluid form factor that they’re trying to embody with this device. It also doubles as an extra grip to prevent accidental slips and falls. On the other hand, its slim profile is perfect for slipping into backpacks, carry cases, and even tote bags without adding unnecessary bulk. 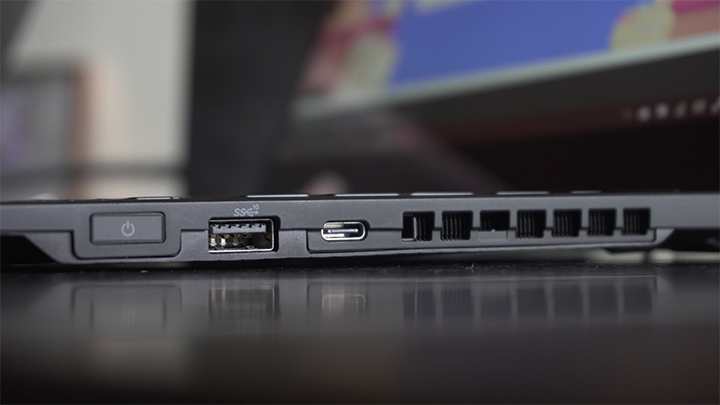 As a standalone device, the X13 Flow is equipped with all the essentials you would need. Starting on the right side is the power button that doubles as a fingerprint scanner, a single USB-A port, your Type C port for charging, and some extra space for the exhaust grilles. 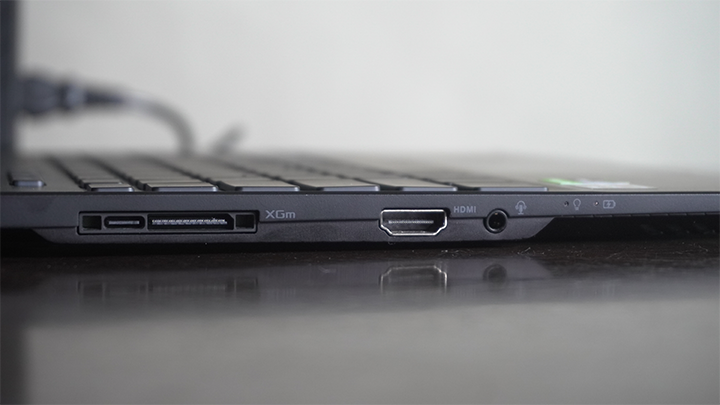 While on the left you can find two led indicators for power and charge, a 3.5mm jack, an HDMI port, and of course the proprietary XGM port. 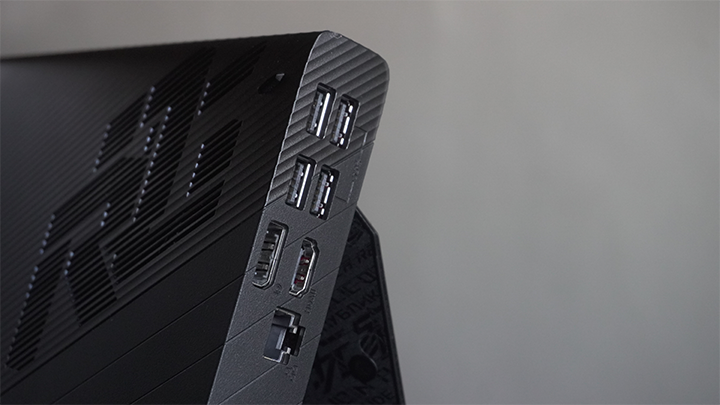 But with the XG Mobile GPU hooked up, we’re getting a plethora of ports and interfaces. That’s four USB-A connections, an SD card slot, an Ethernet port, as well as the DisplayPort and HDMI ports on the actual graphics card–essentially everything a standard desktop could possibly have, except much more portable.

If you’re the type that loves versatility then you’re in for a ride. The Flow X13 is making industry waves with its four modes: Laptop Mode, Tablet Mode, Stand Mode, and Tent Mode. While they’re not the first to do this, it is the first to emulate it at a very high-spec level; heck, this may well be one of the only hybrid gaming laptops that actually do well in all departments. Its 360° convertible design allows it to easily adapt to your preferred viewing angle, making it perfect for those that love gaming, editing, or even possibly sketching on-the-go. 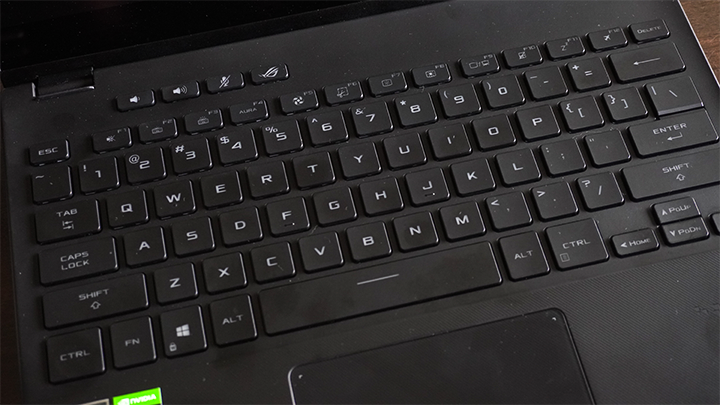 The keyboard is also a pleasure to use as it does require a good amount of actuation force. N-key rollover is present to ensure all inputs are registered and just generally gives a great typing experience. There’s no RGB to be found anywhere so that versatility is even able to trickle down to a more business environment – albeit the gamer font might give it away though. 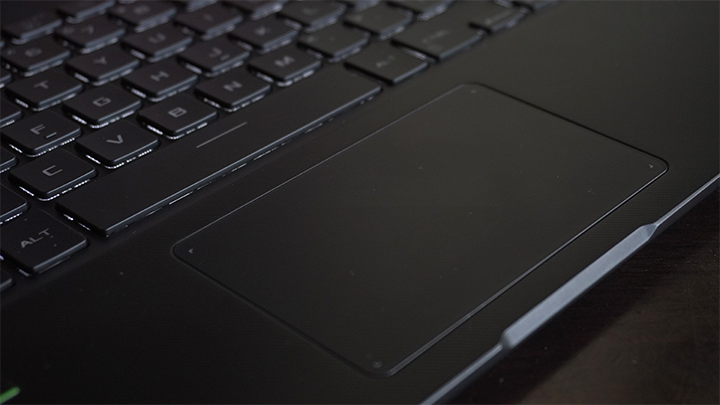 The touchpad is equally as good. It’s very responsive, spacious enough for the cursor to easily reach all four corners of your desktop without lifting a finger, and also has a satisfying clicky feel on both the left and right input buttons.

Equipped with a 13.14-inch corning gorilla glass panel and adaptive sync, the Flow X13 is durable and highly intuitive. There’s an option to choose between an immersive 4K panel at 60Hz, or an FHD+ panel with a refresh rate of 120Hz for super-smooth gaming. 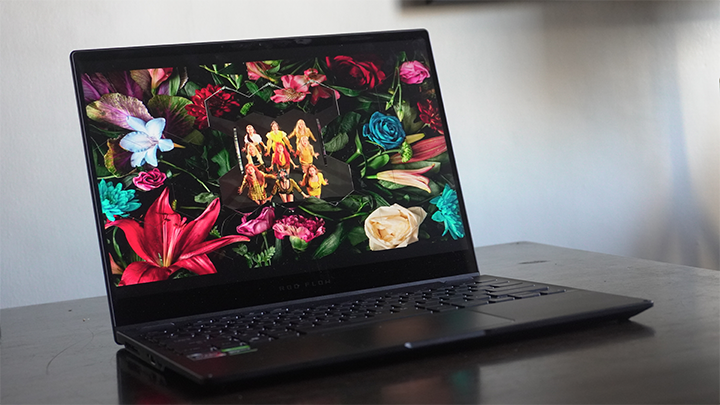 Adaptive sync is certified with Pantone® Validated colors that adapt to your photos and videos’ color spaces in an instant – making it perfect for those who do professional photography and color-grading. Interestingly enough, the X13 adopts a 16:10 ratio that is unusual for a gaming laptop. However, if you think about it, it does give you more vertical space, which is perfect for those that use it as a work or editing device as well. This means less scrolling and zooming in and out.

It also comes with a built-in 720p resolution webcam. While its actual performance is standard at best, the fact that its presence doesn’t add to the weight nor takes away any space from its almost seamless monitor design is definitely a bonus. So, if you’re the type that regularly uses zoom or other video call hosting platforms for important meetings or online learning, then maybe investing in a good third-party webcam would suit your needs better.

Now as for audio, generally speaking, laptop speakers do have a reputation for sub-par quality. And although true is still to be said for a lot out there, the X13’s low’s and hi’s are surprisingly one of the best I’ve heard on a laptop (so far). So if you end up forgetting to bring your external Bluetooth speakers along with you, you’ll find the Flow’s built-in speakers to be more than capable of getting you through with an adequate listening experience.

Running the software department is Windows 10 Pro. If you’ve experienced using ROG laptops before, one of the essential tools installed out of the box is the Armoury Crate, which is quickly accessible by pressing the dedicated ROG button on the top row of the keyboard. From here, you can access CPU and GPU stats, memory, storage consumption, fan speed, and even system acoustics. 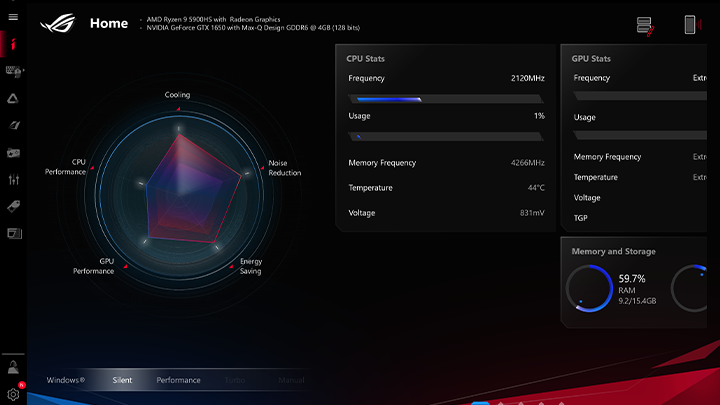 This is also where you can select operating modes (Windows, Silent, Performance, Turbo, Manual), set scenario profiles, change system configurations, access AURA Sync and AURA Creator, and see your Game Library as well. Our unit comes with a 1TB NVMe SSD that has quick boot times both from sleep and complete shutdown. Here is the Crystal Disk Mark 6 result for the drive:

The Asus ROG Flow X13 is anything but small. While it does have a compact build, its on-paper specifications are far beyond the standards of most gaming laptops. Underneath its lightweight chassis, it features an AMD Ryzen 9 and a dedicated GTX 1650 GPU with Max-Q Design. While, in terms of RAM, our unit boasts 16GB DDR4 right out of the box, although this does come in a 32GB option as well. 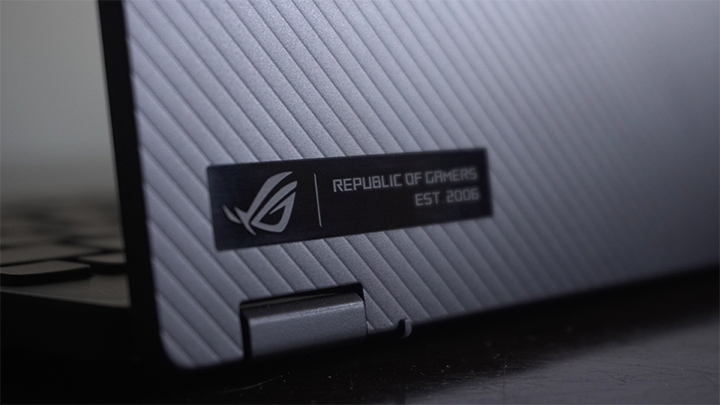 Here are the benchmark scores of the ROG X13, plugged in and automatically set to performance mode: 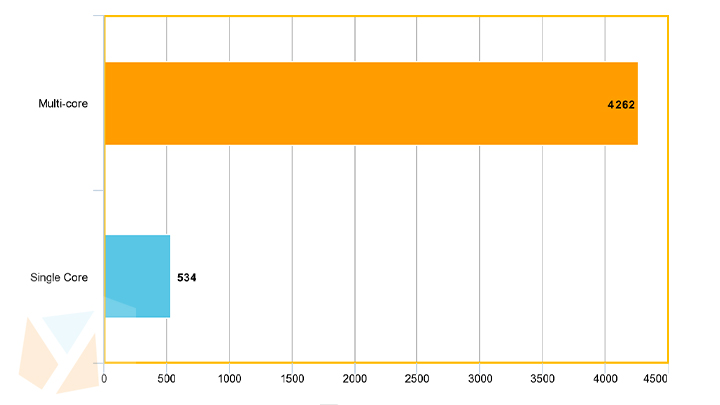 Starting with Cinebench R20, we’re looking at pretty great CPU scores with that Ryzen 9 5900HS.  Based on the rankings we’re at number 4, right below AMD’s Threadripper which is really great to see. Since this is more CPU intensive, results will be similar with or without the XG Mobile plugged in. 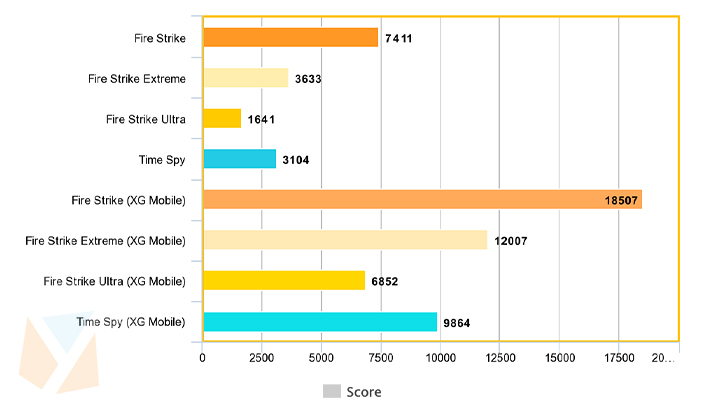 Where we really see the big performance difference is 3D Mark’s Time-Spy and Fire Strike tests, which is what we used to check out GPU performance. As a standalone device, results are respectable, but nothing we haven’t seen before since this is a GTX 1650 onboard. Everyday tasks are not just a breeze, but exceptionally fast as well.  Hook up the ROG XG Mobile equipped with that RTX 3080 and you’re looking at bizarre desktop performance scores – making gameplay on high settings for even the most graphic-intensive games will be easy peasy. The sheer ability to switch to an RTX 3080 easily is a massive upgrade from a GeForce GTX 1650 performance-wise alone. Here are the rest of our benchmark scores below: 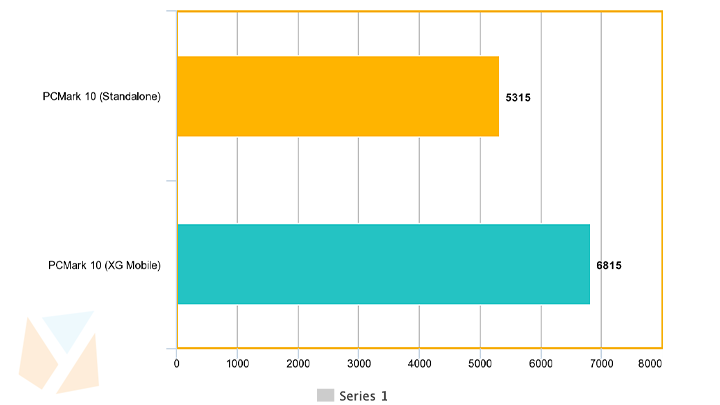 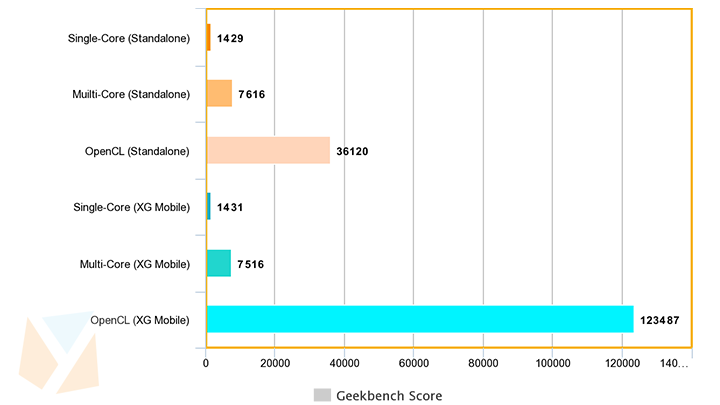 The Flow X13 boasts a 10-hour battery life, even with continuous HD video playback.  From a full charge of its included 100W charging brick, you can expect a decline in battery life when put through graphics-intensive gameplay at 6 hours and 30 minutes. While this might seem like a big decrease, you also have to put into perspective that most gaming laptops only last an average of about 4 hours when used unplugged. So, for a premium gaming laptop, this fares well above average.

Whether you’re a hardcore gamer, a content creator, or both, there’s no denying that the search for the one true laptop is difficult. There are so many factors you have to put up against each other and seemingly, not one laptop really meets all those criteria – as the best ones always reserve their focus on a niche feature. However, with the introduction of the Asus ROG Flow X13, versatility for unified use is not that far-off in our future. 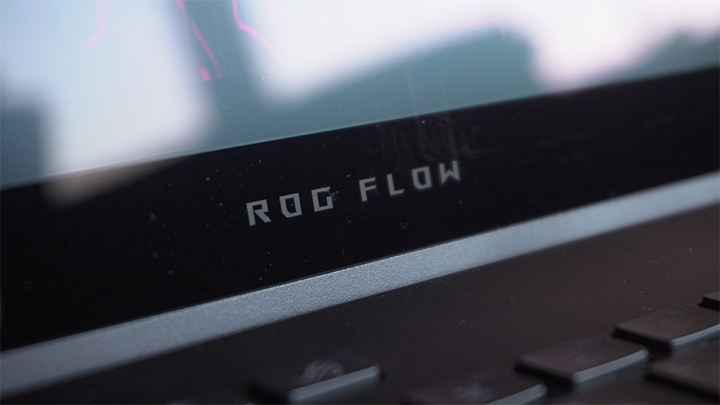 The only possible downside to this is the fact that the XG Mobile is still in the first version. But regardless, it’s undeniable that this all-around laptop exemplifies what the tech world has yet to bring and what is already on the table that can be further enhanced and modified. So, if you’re looking for a powerhouse laptop to supplement all your content creation and gaming needs, then the Flow X13 is your best bet yet.