A couple of months ago, ASUS Philippines announced the local pricing of its latest ROG gaming laptops which are equipped with the new NVIDIA GeForce GTX 10-Series graphics. We got our hands on the GL502VS following the more expensive G752VS so let’s check out what this on-the-go gaming rig has to offer both in appearance and performance. 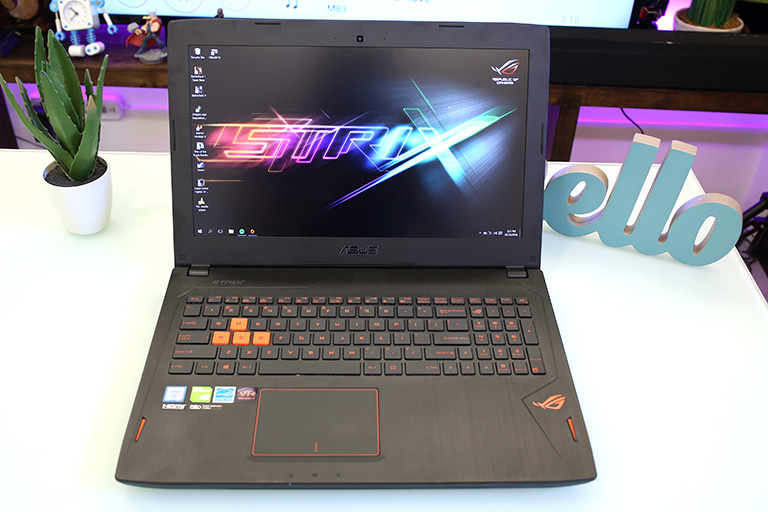 The GL502VS sports a smaller 15.6-inch screen compared to the 17.3-inch display of the G752VS that we recently reviewed. Still, it proved to be just right when you use it for gaming, browsing the internet, or watching videos and didn’t feel cramped at all.

Opening the lid maxes out at a 170-degree angle which was overall comfortable to use. 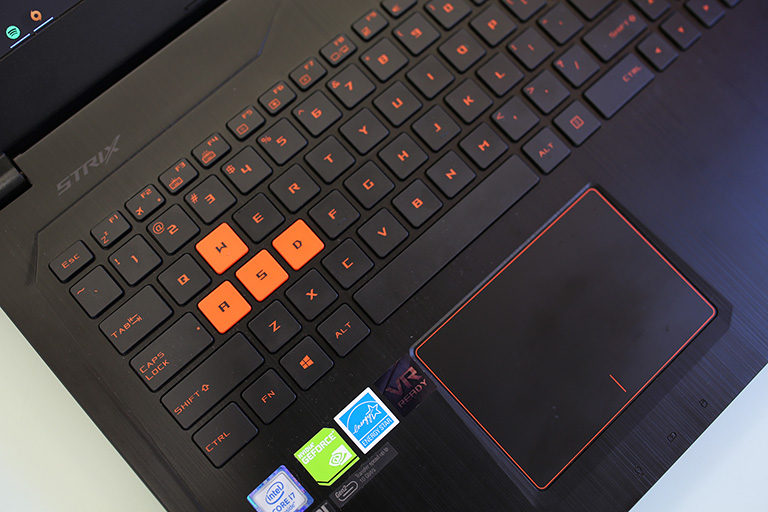 Its chiclet keys are ergonomically spaced out which, in turn, are a joy to type on. Although, sometimes, we found ourselves hitting the wrong keys on the arrows when not looking.

As you can see, this GL502VS employs a neon orange color scheme and is seen prominently on the WASD keys and in other subtle accents as well. 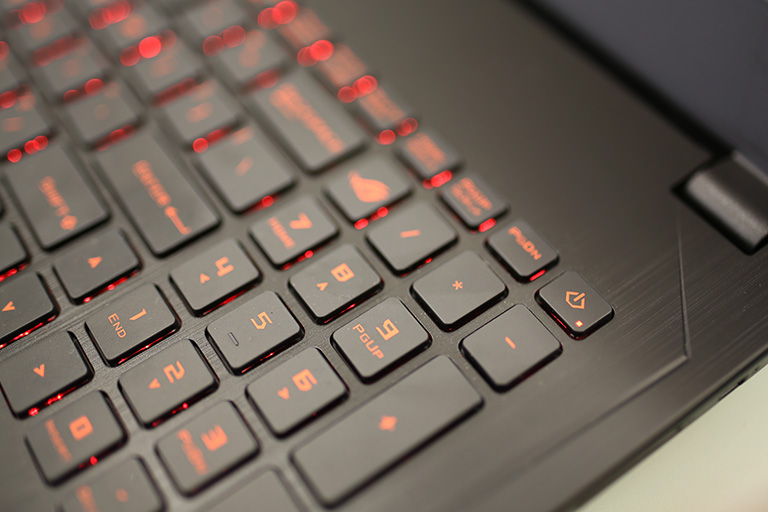 The keyboard is illuminated with the same orange hue and is perfect for using the laptop while gaming at night. 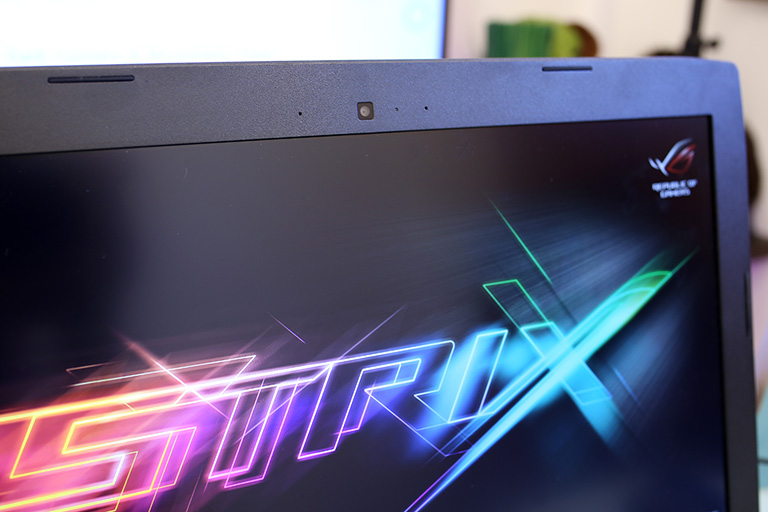 The laptop also features a High-Def camera for video calls (or recording your expressions while you play). 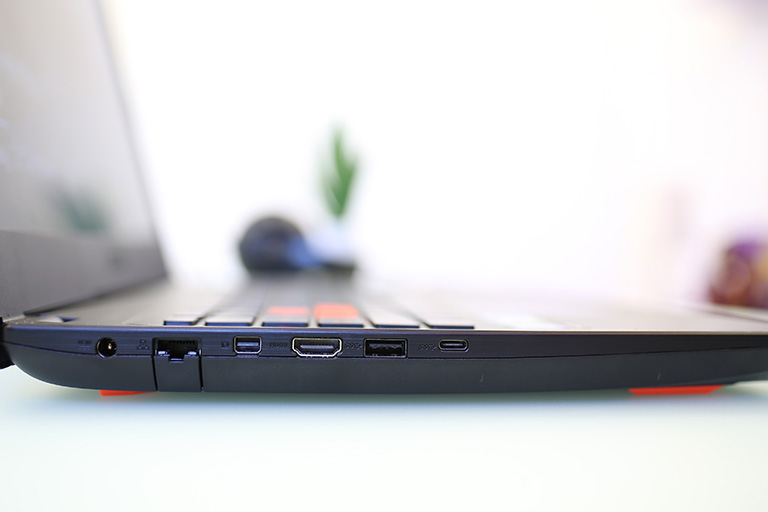 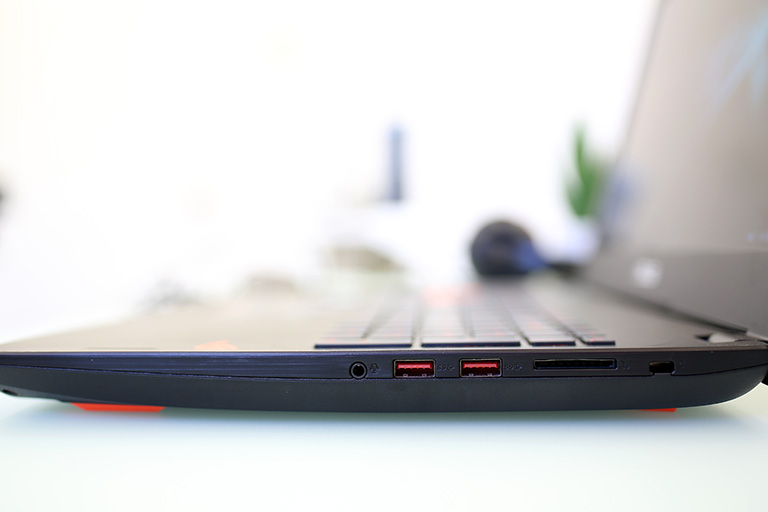 More are seen on the right-hand side namely: the headphone out/audio in combo jack, more USB 3.0 ports, and an SD/MMC card reader. 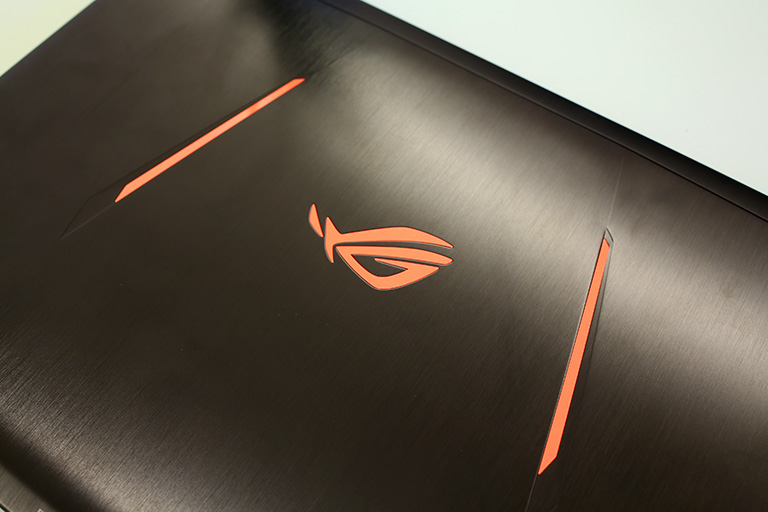 The lid communicates a sleek and informal vibe with its brushed metal finish and the Republic of Gamers logo right smack in the middle. 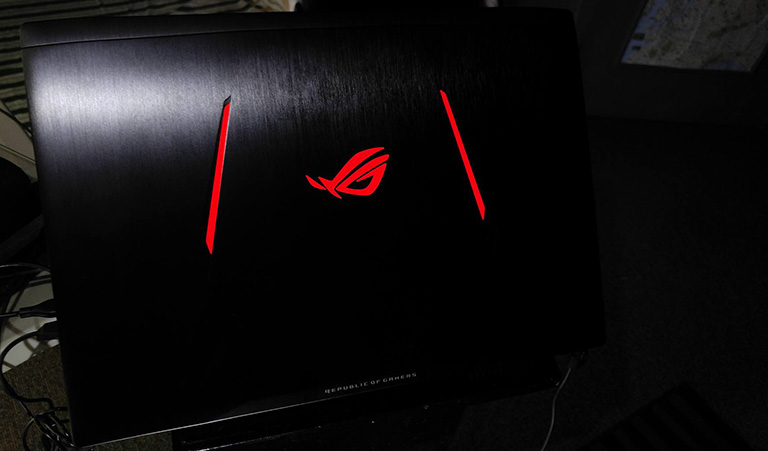 This same logo, along with the two orange strips beside it, lights up when the laptop is on.

The GL502VS has a bulky form factor and this is obviously due to the internals it packs. Its dimensions clock in at 39 x 16.6 x 3.01cm, while its weight is at 2.24kg. It could still be carried with one hand, but there is an undeniable heft to it. 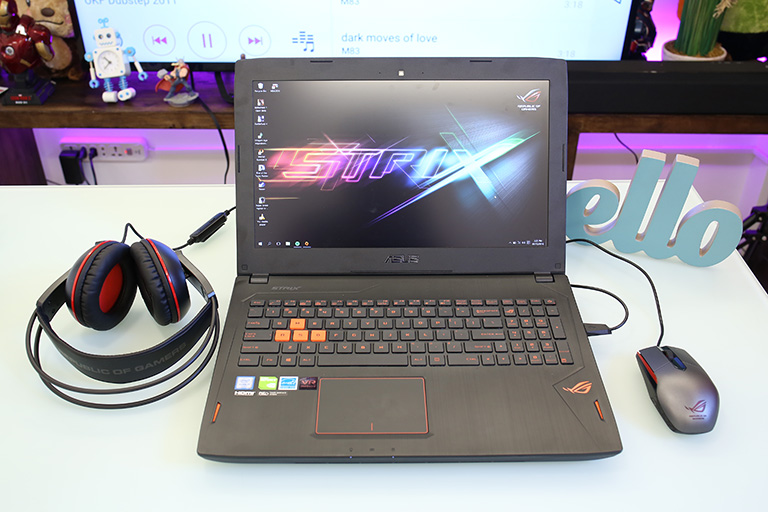 In addition to the smaller display size, this gaming laptop also packs lower resolution compared to its UHD-equipped brother. The GL502VS maxes out at Full HD resolution but it still makes gaming and watching enjoyable. After all, in PC gaming, display resolution isn’t everything since the graphics processor also plays a large part; and we all know this model doesn’t come short in that department.

Moreover, its screen has a matte finish which avoids unnecessary glares. It also has good viewing angles for sharing content to friends. 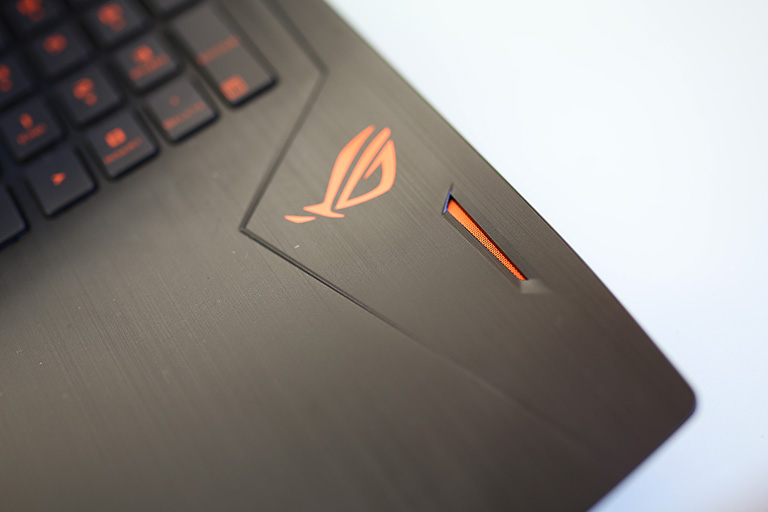 The GL502VS also boasts built-in stereo speakers made by ICEpower and boasts ASUS’s Sonic Master audio. We were impressed with its performance that we rarely used a pair of headphones when gaming or while watching movies. Details are present, volume is sufficient, and the bass has decent thumps in it.

Running the show is a 64-bit Windows 10 which comes with the company’s apps like ASUS Giftbox, ASUS HiPost, ASUS live Update, and WebStorage. There are also productivity software like Office in addition to the standard apps available online. It also includes a 1-month trial for new Microsoft Office 365. 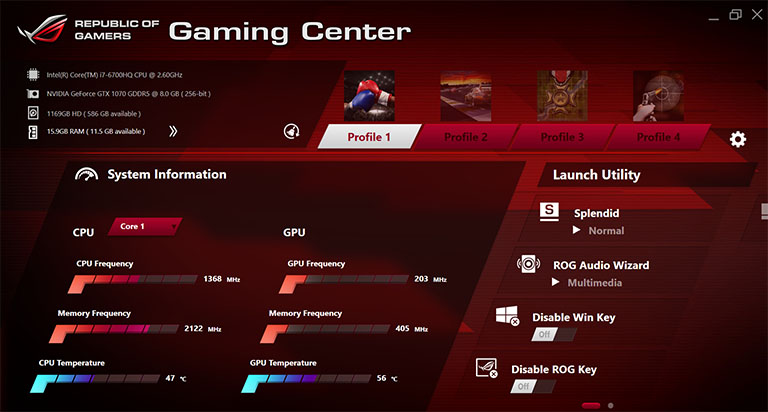 Since having quick access to the information of your internals is important, the GL502VS has the Republic of Gamers Gaming Center that displays all the necessary data in one glance. Here you have the CPU and GPU frequencies in addition to the temperature so you know when your rig is getting too hot or when it’s processing too much load. 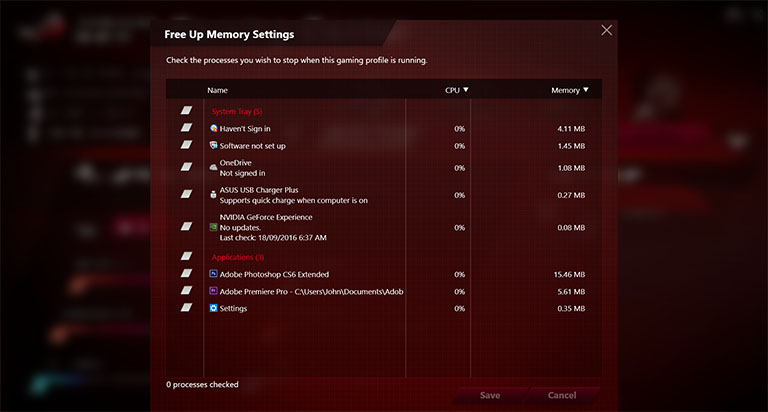 It operates on both an SSD and HDD storage with the OS installed on the 256GB solid state drive so it could easily boot up in seconds. For storing large files, there’s the 1TB hard disk drive for that.

As we’ve mentioned earlier, the bulky form factor of the GL502VS is the result from having beefy specs. Starting it off is the Intel Core i7 at the heart and is accompanied by its posse of 16GB DDR4 RAM and NVIDIA’s GeForce GTX 1070 8GB GDDR5 graphics. This GPU is what makes the laptop your all around gaming buddy as you can bring it with you and simply play your favorite games anywhere.

Truly, the performance it gave was simply impressive. While playing Rise of the Tomb Raider and zooming up on Lara Croft’s sweet face, we could see the blemishes on her skin as well as dirt and other details that you usually don’t see on video games. The graphics during gameplay was like watching a cinematic cut scene from a Final Fantasy game on a console.  The environment, on ultra settings, was also very life-like — effectively immersing us into the game.

We ran our usual benchmark tests and here are the scores:

We noticed that while playing games, the area above the keyboard gets really warm. Upon checking the Gaming Center, we recorded a GPU temperature of 67 degrees Celsius with the CPU at 69 degrees Celsius.

It wasn’t too hot to touch but one can feel its warmth when using the keyboard. 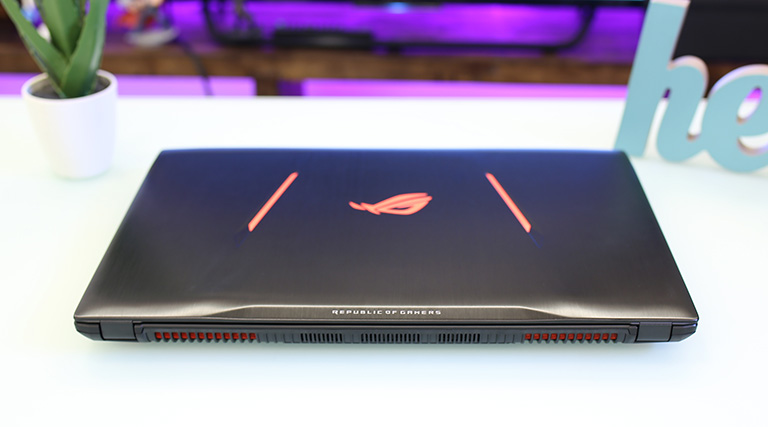 We played Dragon Age: Inquisition to test its battery with these parameters:

The GL502VS lasted for 2 hours and 19 minutes before we drained its battery. This is a significant advantage over the G752VS that only lasted 1 hour and 30 minutes during our test.

The ASUS ROG STRIX GL502VS is one beast of a gaming machine although it doesn’t come with a bigger 17-inch display and Ultra HD resolution. We totally enjoyed playing on its Full HD display and pair of high-quality stereo speakers. Other than for gaming, we also were able to utilize its capabilities in video editing as it was able to playback video smoothly even without rendering it first.

To put it simply, its GTX 1070 GPU is simply a graphics behemoth for everyone to enjoy.

The GL502VS is indeed bulky and a tad bit heavy, but for what it can do on-the-go, we wouldn’t mind carrying it around. Lastly, just like the previous ROG laptop we reviewed, it comes with a ROG SICA 5,000 DPI optical gaming mouse, ROG Cerberus gaming headset, an ROG Armor-Suit backpack, and 2 years of global warranty.