The ASUS ROG Zephyrus G14 initially made its debut in 2020 and has since upgraded its configurations. The ASUS ROG Zephyrus G14 2022 is the latest generation of one of their top-rated gaming laptops under the AMD lineup. Will it make it to the top of the food chain or will it still need a lot of improvements to be one of the best in its price range? Read on to find out. 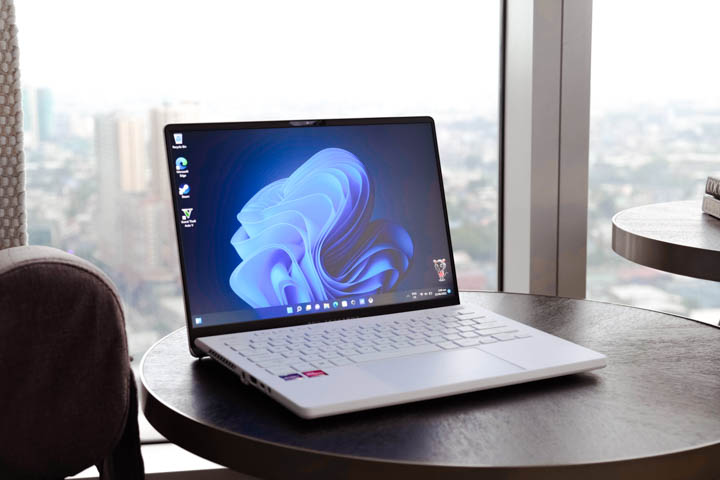 To start, Zephyrus G14 2022 is made up of an all-white chassis with a particularly large AniMe Matrix mini-LED display on the back of the lid (Though this option isn’t available on all models). Its dimensions of it are 12.28 x 8.94 x 0.77 inches and weigh 1.72 kg. The design of the chassis is sleek and well-rounded, with sharp diagonal vents balanced out by tapered edges. Once the lid is turned up, you are greeted by a sizeable keyboard along with its touchpad right under the bright 14-inch display. The display itself has a nice thin bezel on either side that thicken as you slide along the top and bottom. 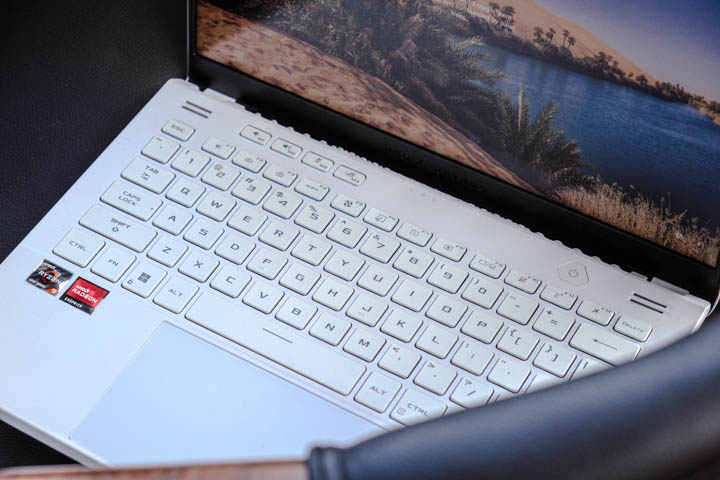 As the lid is pushed back, it lifts up the laptop off the table. This increases airflow underneath the laptop and reclines the keyboard giving it a more comfortable feel for users. 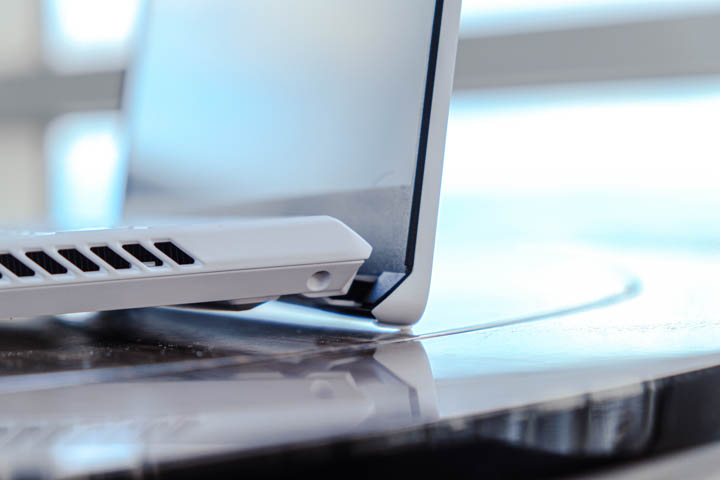 Along the edges of the Zephyrus G14, 2022 is a great selection of ports giving adaptability to it. On the right-hand side are two USB-A ports, one USB-C port, and a UHS-II microSD card reader. 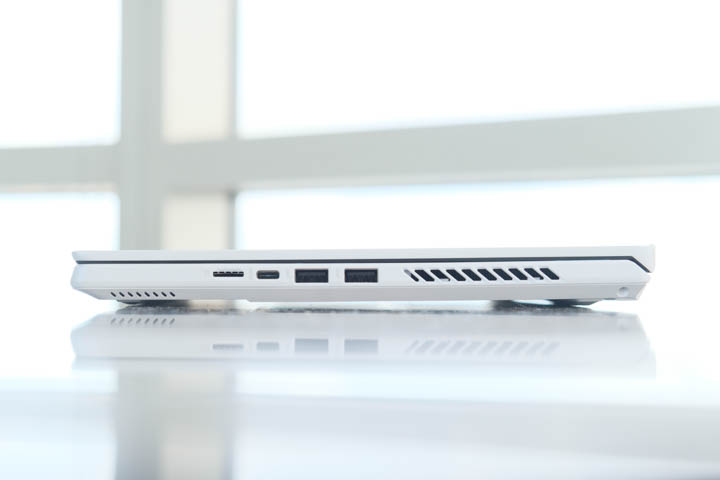 On the other end, we have an additional USB-C port capable of power delivery, an HDMI 2.0b port, a 3.5mm audio jack for headphones and headsets, and lastly the port for the power cable. Although we’ve seen more of the ASUS models transfer the ports to the rear, this one oddly still has it on the side giving a bit of cable routing issues for users. 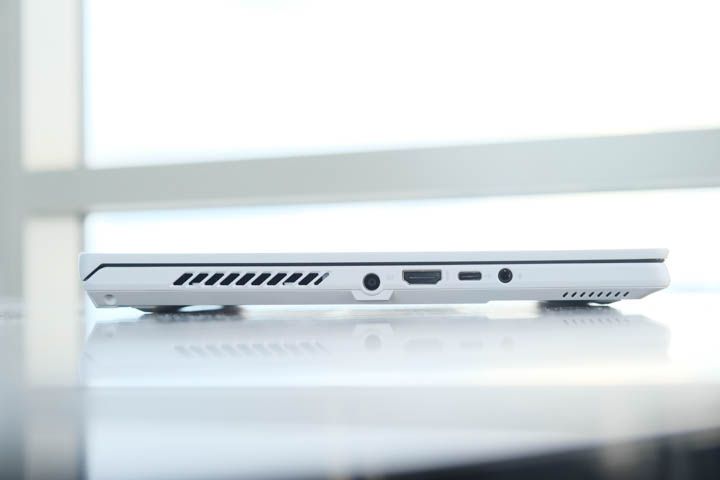 Moving on to its display and multimedia aspect, the 14-inch display has a WQXGA (2560 x 1600 Pixels) resolution which looks really detailed in person. Given that it has a 16:10 aspect ratio, it feels spacious especially when multiple applications or windows are open on the desktop. Moreover, the display is capable of 120Hz refresh rate, 3ms response time, and has support for Dolby Vision HDR making it appropriate for making games and movies look spectacular.

Probably one of the better features of the Zephyrus G14 2022 is its quad-speaker system which is built to create a good and loud immersive space for users. Even at the highest volume one of the most apparent qualities anyone would be appreciative of is that there is no distortion at all. Of course, with ASUS’ feature called the Smart Amplifier Technology, the speakers would be boosted but won’t sacrifice quality. 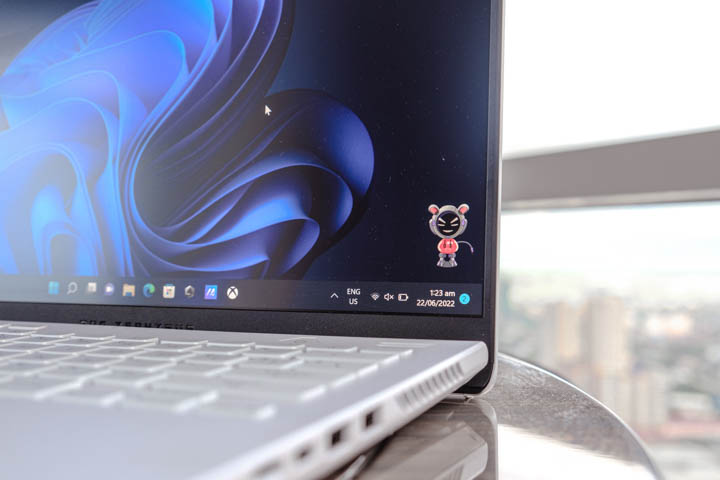 Despite being built for gaming, the Zephyrus G14 is also suitable to be a daily workhorse for multimedia designers thanks to the comfortable keyboard and battery life. It pretty much gets the necessary work done, and with the experience we’ve had with it, it performs quite extraordinarily.

On PCMark, the ASUS Zephyrus G14 2022 earned the following scores:

While on 3DMark the results are as follows:

If moving files were a factor for purchasing a laptop, users would be amused that the Zephyrus G14 2022 is quite speedy in this aspect as well as video encoding only taking it under 6 minutes to render a 4K video down to 1080p using Handbrake.

Beneath all the white and slender aesthetics is the newest AMD Radeon RX 6800s graphics card that is more than capable of running some of the latest triple AA games at the highest quality and even on QHD+. AMD outfitted the graphics card with AMD FidelityFX Super Resolution technology allowing it to deliver a smooth FHD gaming and boost FPS at even higher resolutions. AMD calls it the Infinity Cache which is how it delivers data to the GPU. 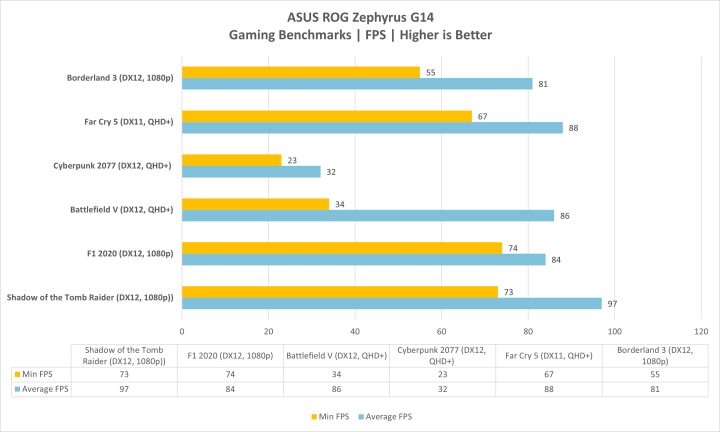 Among other things, the Zephyrus G14 2022 also comes with a reasonable number of pre-installed software from AMD, ASUS, and Dolby. Much of which is in the Armoury Crate of ASUS which is an all-in-one application for managing system performance, macros, customizing AniMe Matrix (if compatible), and others. 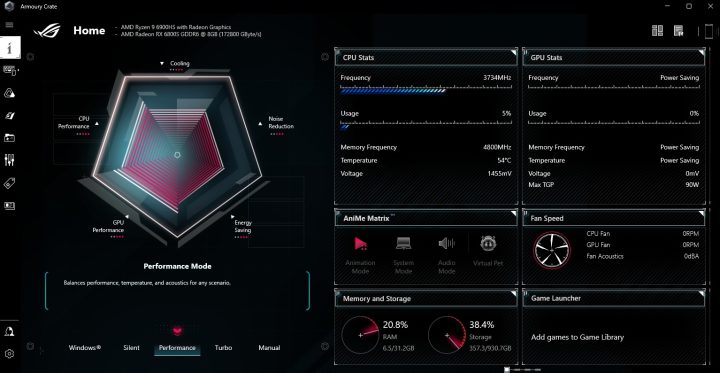 Although, the Aura Creator is also there for a great selection of RGB lighting profiles for the Zephyrus and other compatible devices.

Finally, the Zephyrus 14 2022 has the OMNI Virtual Pet, an app that creates an animated robot to appear on the desktop. The robot can appear on the AniMe Matrix, display system stats, or play mini-games with users. Going on to the battery life, the longevity of the ASUS Zephyrus G14 2020 lasted us around 11 hours and 52 minutes with a standard video loop test. Since there really isn’t anyone who would game on battery life, we decided to just run it on regular tasks. Although, after testing, the Zephyrus G14 2020, only lasted around 10 hours and 32 minutes which is less than the previous.

Though the ASUS Zephyrus G14 is already an upgraded powerhouse thanks to its newest configurations and the latest AMD Ryzen 9 6900HS, it still might have drawn more power than it should have.

The 16:10 QHD display along with its high brightness is one of the G14’s key benefits and unique selling points. Moreover, the colours out of the box fit for those who need to do some multimedia design or edits. For the gamers out there, the high refresh rate of 120 Hz is probably one of the selling points for them with the benefit of the quad-speakers for a fully immersive experience. 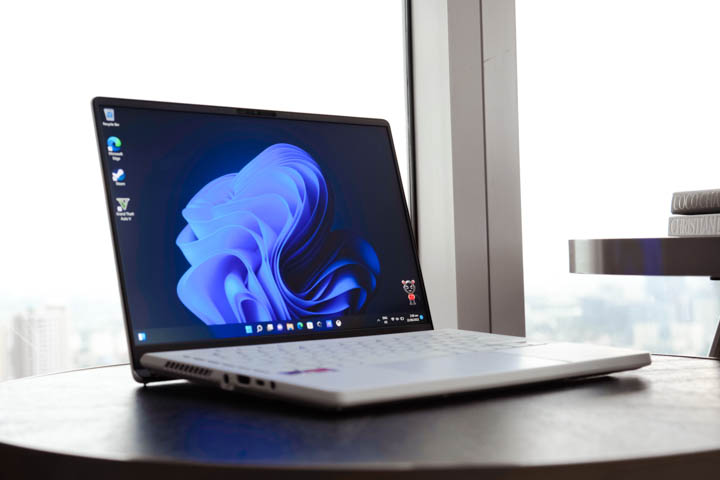 ASUS can probably provide a better gaming-optimized power profile that would limit the overpowered processor that tends to be quite hot. The profile is already in existence but only functions automatically while playing games on an external monitor with the laptop’s lid closed.

The ASUS Zephyrus G14 2022 review unit we got isn’t available in the market yet but there are some that are already in the market with different configurations. Prices start from PHP 119,995 to PHP 134,995. Check out the ASUS ROG website for more information.

119k for the lowest configuration is quite steep. 2021 Zephyrus starts at 65-70k. Are they planning to release lower priced configurations? I like the built-in webcam and bigger trackpad but don’t really need the anime matrix.

Sorry but this review has some critical missing details.

I didn’t learn anything on how well the graphics perform on this laptop… the model and wattage of the video card wasn’t indicated and there are only synthetic benchmarks. Unless I’m comparing it with synthetic benchmarks of other gaming laptops, I have no idea if those PCMark and 3DMark numbers are good or bad.

Can we have video card specs of the model you have as well as benchmarks on a couple of the latest AAA games?