ASUS‘ TUF series is well-known for being rock hard desktop components offering both performance and durability. Now, they are bringing that renowned build quality to their laptop line with the introduction of the TUF Gaming FX504. Does it have what it takes to truly be called TUF? Let’s find out in our full review! The TUF Gaming FX504, or let’s just call it the FX504 TUF, takes on the design cues of its desktop counterparts. It has a silver overall finish with intricate linings to portray “toughness” or strong durability. It can be considered discreet when closed, but once opened you’ll immediately notice the curves and lines meant to portray its “gaming” side.

It’s still stealthy though, compared to most gaming laptops. Overall it looks nice and aggressive, although not too much that it catches attention. 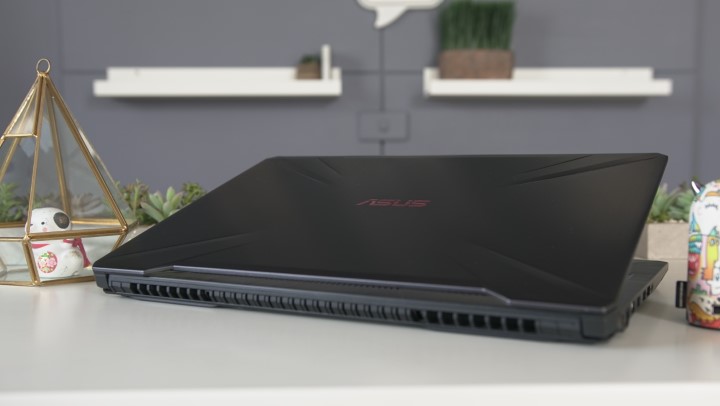 True to its name the FX504 TUF really is, well, “tough”. There is only minimal screen flex and almost completely no keyboard and chassis flex, even when we tried to bend it with significant force. The laptop is built like a tank as it was intended to be.

Of course, with this kind of build-quality comes a bit of extra weight. While not the heaviest one out there, lugging it around in long commutes or walks weighed us down. Still, we didn’t mind having those extra grams in exchange for better durability. Our only gripe really is that it’s a total smudge and fingerprint magnet and that its hard to wipe off. 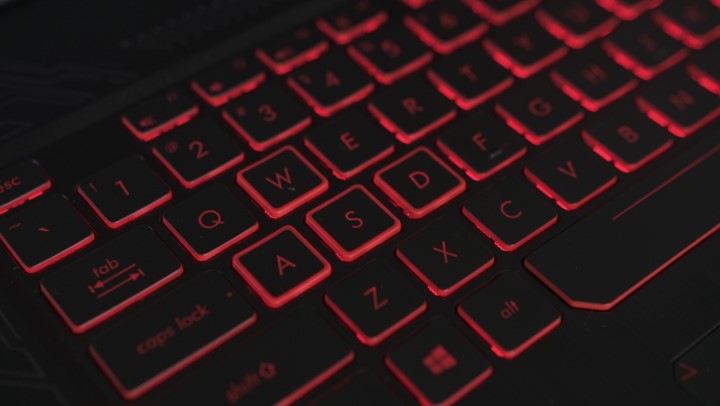 Now on to the keyboard and trackpad. We’re treated with a full-sized chiclet keyboard with its own dedicated Numpad. Travel distance is okay and tactile feedback is present, although slightly lacking as presses still feel a bit mushy. It’s still nice to type and game on though despite that slightly mushy feel. 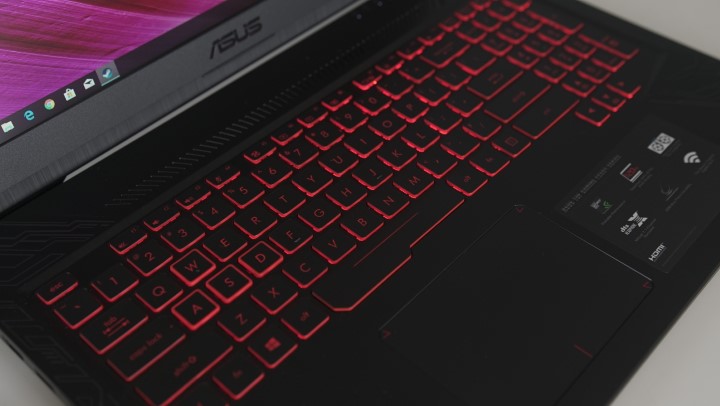 As always with gaming laptops, we have red adjustable keyboard backlighting, that’s helpful in low-light situations. The arrow keys are positioned slightly lower than normal with only the up arrow being aligned with the rest of the keys. It took us a few hours to adjust to this format as reaching for the shift and enter keys requires a bit more stretch than usual. Once accustomed though, it’s a seamless experience. 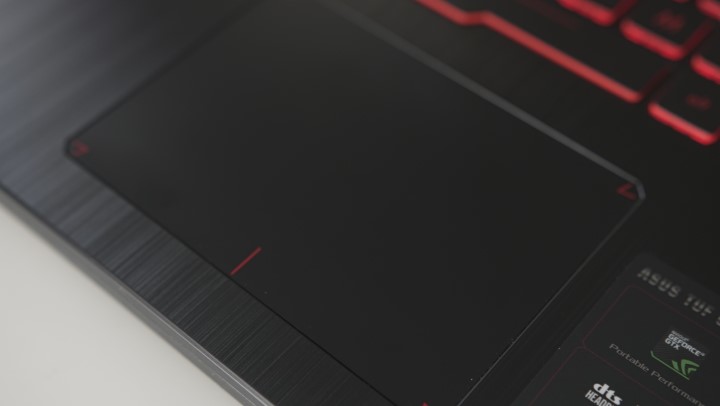 The trackpad, on the other hand, has a smooth but grippy surface with a divider below to distinguish the left and right click functions. There are no physical buttons here but the pad itself can be clicked. It registers gestures well but it has a faster than normal DPI out-of-the-box.

We had instances where the mouse pointer just blitzed through the screen. Of course, you can adjust the DPI manually if the out-of-the-box setting is too much. Sadly, like with the rest of the chassis, the trackpad too is a smudge and fingerprint magnet. Now, this is where it becomes juicy. Apart from the militaristic, stealthy yet solid-build, the FX504 TUF has a variant that sports a 15.6-inch 120hz FHD TN panel. This is probably one of, if not the, most affordable laptop with a high refresh rate display option. Sadly, while we do get a buff in refresh rate, colors and viewing angles take a hit since it will be a TN panel. Okay, back to the panel of the one we reviewed.

The unit we have is the lowest specc’d one, so we only have a 60hz panel here. It has a little thicker than normal all around bezels. Either way, blacks are quite lacking and colors are a bit dull but the details are crisp and pixel density is good thanks to the FHD resolution. Viewing angles are also acceptable. The FX504 TUF carries with it a standard set of speakers that can pump out decent and loud audio with good clarity. Sadly, lows are a bit lacking but we do get DTS Headphone X tech.

So, plugging in your favorite audio gear will give out crisp, beautiful sounding music and sound effects. We recommend you keep audio gears plugged in to take advantage of that added benefit from the DTS Headphone X tech. 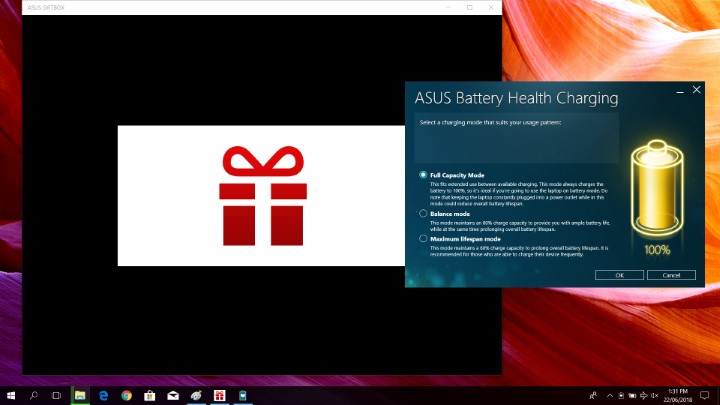 Running the software department is Windows 10 Home. We got minimal pre-installed apps, which are ASUS’ homebrew and a few Microsoft programs. This includes apps such as Battery Health Charging, Install, Gift Box, Live Update, USB Charger Plus, Splendid Utility, and Microsoft Office 365. The FX504 TUF comes with a traditional 1TB HDD accompanied by an 8GB SSHD. It’s your standard storage setup with a little oomph thanks to the 8GB SSHD. Still, it’s better to upgrade that secondary drive to a full-fledged SSD for faster speeds and transfers.

Of course, the main attraction of the FX504 TUF is not its tanky chassis but its ability to play games. As such, ASUS equipped the laptop with an i5-8300H processor, Nvidia’s GTX 1050 GPU, and 4GB of RAM. The model we got is actually the lowest specc’d one, with the highest sporting as much as an i7-8750H and Nvidia GTX 1050Ti. Despite that, the 8th gen i5 and GTX 1050 combo is still not too shabby. While the processor and GPU pairing is not the worst out there, we do get a measly 4GB of RAM, which nowadays is no longer enough. In fact, the laptop lags every now and then even at basic multitasking such as opening multiple light programs (word, paint, calculator, etc) and worse in heavy tab browsing.

The FX504 TUF can certainly play light to moderate games at medium to high settings at over 60fps to take advantage of that 120hz refresh rate panel. Sadly, when we move to Triple-A or heavy titles performance takes a big dip. Unless graphical settings are set to low along with changing the resolution to at least 720p, games will not hit even the average 30fps mark. Adding RAM may be able to boost performance a bit but it still won’t be enough for a smooth over 60fps Triple-A experience. 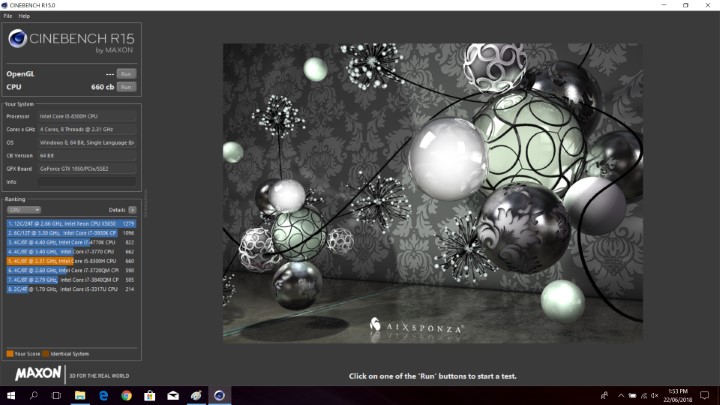 Which is just sad, as the 120hz display cannot be utilized to its full potential. Sure, you will be able to hit over 60fps once graphical settings are lowered but that’ll affect overall visuals and flair of games. Not to mention, it’s better to have both smooth experience and good visuals. In any case, the display is still perfect for light to moderate action-packed games like League of Legends or Dota 2, which aren’t too stressful for the system. (To understand more about refresh rates and display types check this link out) 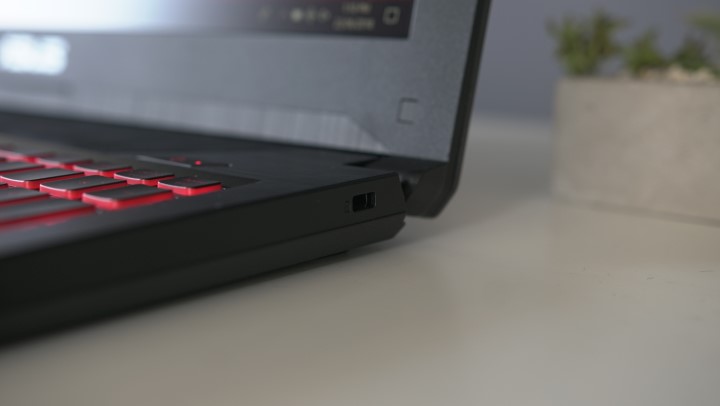 Even with the 15.6-inch frame, the FX504 TUF is a little short on ports. We have two USB 3.0 Type-A ports, a USB 2.0 Type-A, a combo audio port, Kensington Lock, an RJ45 Ethernet port, and an HDMI 1.4 port. The laptop could’ve used an extra USB Type-C port or even an SD Card reader. Especially, with the right side of the laptop being almost bare. Battery life is, as expected of a gaming laptop, poor. During our video loop test (Playing a 1080p mp4 video in airplane mode at 50% brightness and sound w/ earphones plugged in) the device lasted for mere 2 hours and 30 Minutes, really short even by gaming laptop standards. Luckily, charging from 0%-100% takes only about an hour and 45 minutes to 2 hours.

Surprisingly, the FX504 TUF handles heat rather well, impressively well in fact. We subjected the laptop to the FurMark and Prime95 stress tests to check out the temps of the GTX 1050 and Intel Core i5-8300H. The GTX 1050 reached a max temp of only 70-degrees while the i5-8300H didn’t even break 70 and only reached 68-degrees, these are impressive numbers, to say the least. Part of the reason why the laptop was able to maintain such low temps is because of its fans, or rather fan settings. Whenever you start any heavy program, like Adobe Premiere or any game at that, the fans will start to roar. No matter how simple the program, as long as it uses the GPU, the fans will spin like crazy.

It’s bearable if you’re playing games, especially when using headphones or earphones, as the speakers can drown out the noise. Although, when video editing or doing any other heavy task it can be a nuisance.

The ASUS TUF Gaming FX504 is certainly above its price segment when it comes to build quality. It has a stealthy good looking all-metal body with rock-hard durability. It’s not too shabby on other fronts either thanks to the option of having a 120hz display, decent performance, good internal audio, and impressive thermals. Sadly, it’s still plagued with some mishaps and imperfections like its low 4GB RAM, fingerprint and smudge magnet chassis and trackpad, poor battery life, and noisy fans. 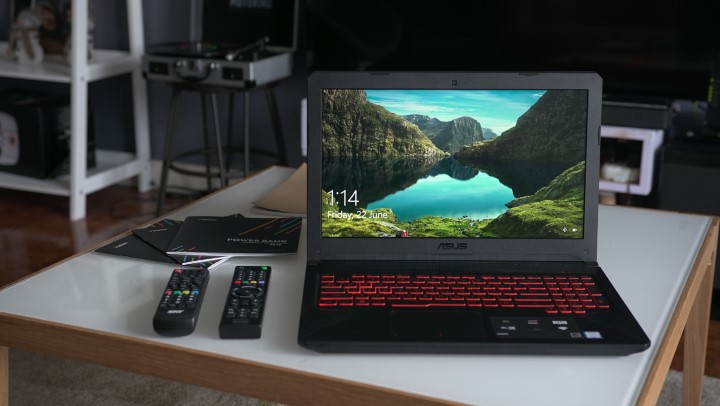 It earns our respect for being one of the most affordable laptops with a high refresh rate display. Although, if you wish to play Triple-A titles or heavy games at over 60fps, then the FX504 TUF will sadly fall short. If, however, you’re more of a competitive gamer that plays moderately demanding titles like League of Legends or Dota 2, then the FX504 should be on your list.