Local smartphone brand Cherry Mobile strengthened its Flare lineup of smartphones with its launch of the Flare S8 series. Several devices belong to this lineup, including the smartphone we’re setting the spotlight on today – the Flare S8 Pro. A couple of months backs, we took this device for a quick hands-on; this time, we had the chance to take it in for a full review. Check it out! 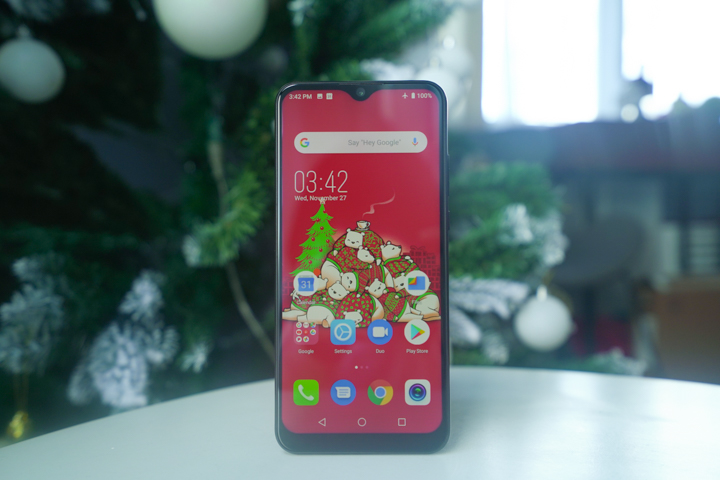 A member of Cherry Mobile’s Flare S8 family, the Flare S8 Pro comes with a pretty sizeable screen. Slim bezels surround the display, with a drop notch and a broad chin. The smartphone sits comfortably against the palm, thanks to its rounded corners. 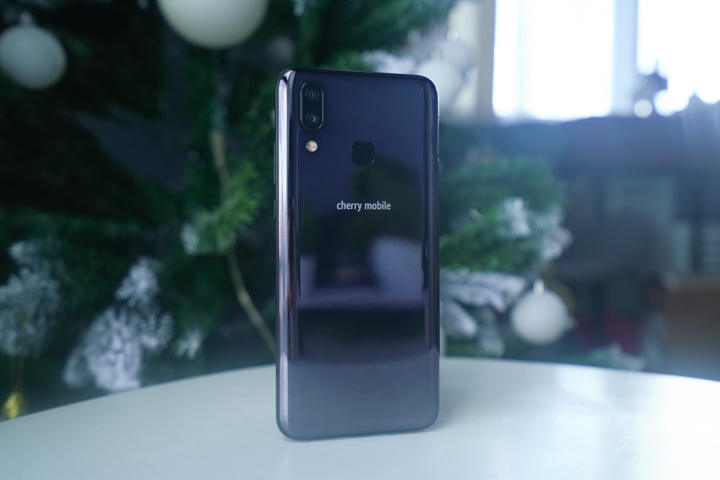 On the rear, one can see the Flare S8 Pro’s glossy polycarbonate plastic construction. It’s prone to fingerprints and smudges; thankfully, Cherry Mobile included a clear case in the package. The upper left corner of the back is home to the dual-camera setup, with an LED flash placed below the module. There’s also a rounded square-shaped fingerprint scanner. 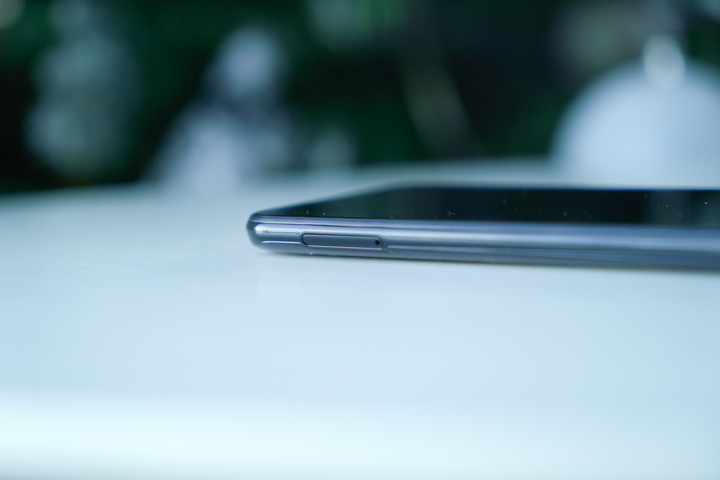 Sitting on the left is a hybrid dual SIM tray. 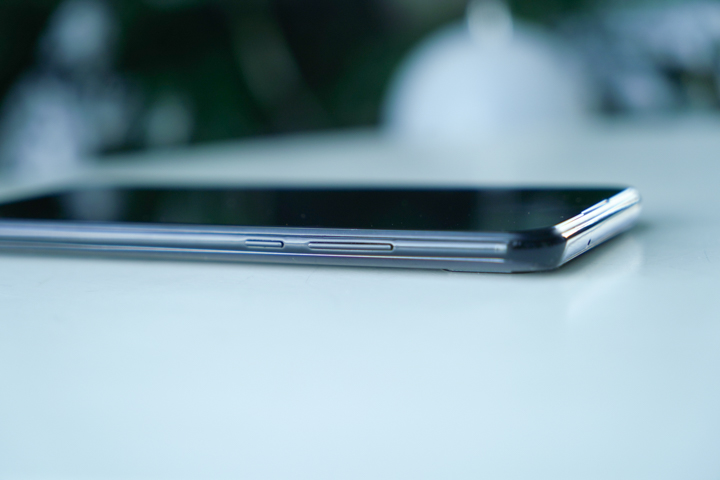 Located on the right are the volume and power buttons. If you have small hands, you’ll find the placement of the buttons a little higher than usual. They’re clicky and tactile, though. 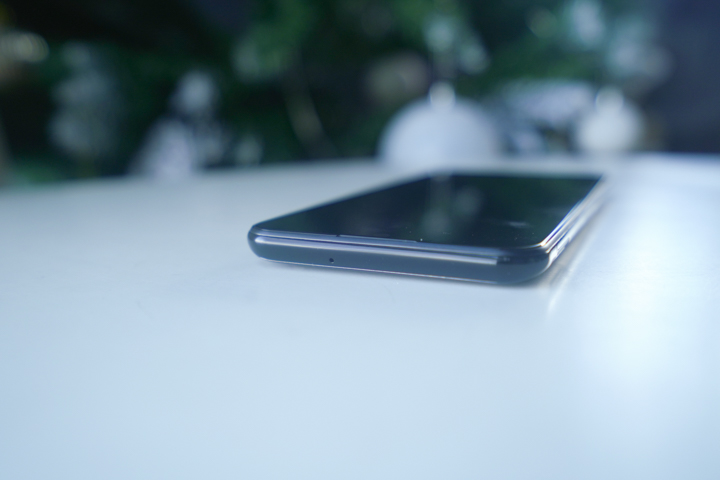 Situated all alone at the top is the noise-canceling microphone. 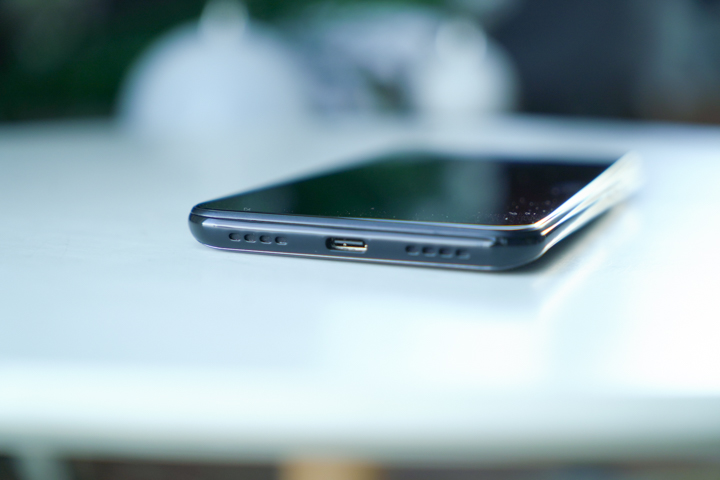 The speaker grilles, microphone, and the USB-C port take up space at the bottom of the device. Unfortunately, the S8 Pro doesn’t have a 3.5mm audio port. Cherry Mobile did include a 3.5mm to USB-C adapter in the box.

The Flare S8 Pro comes equipped with a sizeable 6.5-inch display, with an HD+ resolution. The panel has a pretty warm, yellowish hue to it. We surmise that Cherry Mobile tacked on a screen protector to the S8 Pro, albeit a low-cost one, hence the yellow tint. Due to that, color reproduction isn’t entirely accurate, and the colors seem to be somewhat muted as well. One good thing about the S8 Pro’s panel is that it’s usable at 70% under sunlight. 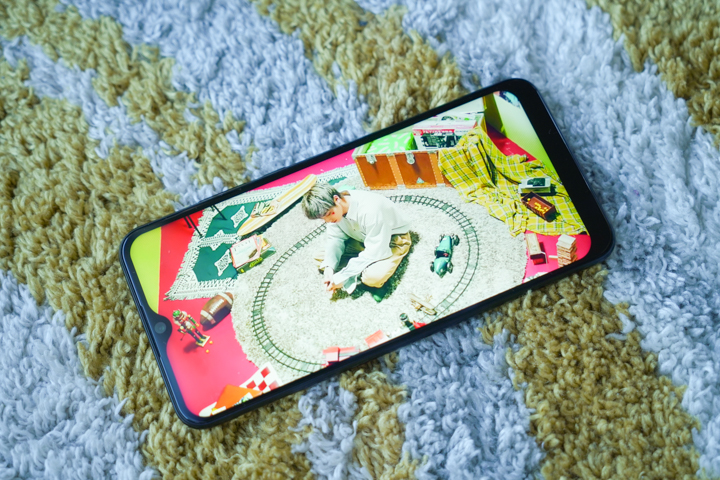 Audio-wise, the S8 Pro can get loud and fill a room at maximum. Although, lows are pretty much non-existent and the sound can get distorted at times. We recommend using earphones or a Bluetooth speaker instead.

The Flare S8 Pro is running on Android 9 Pie with some tweaks on it. It’s not a full Cherry OS but has some Cherry OS features embedded in the camera software and Game Boost. The interface is pretty straightforward and simple. Icons are automatically arranged on the home screen, and swiping up from the middle of the screen will launch the drawer. Navigation can be done using either gestures or buttons, and if the user prefers buttons, Cherry Mobile included a selection of virtual key styles. There’s an option to change to a system-wide dark mode, and there’s also no selection to switch to a neutral, cool, or warm screen color temperature. 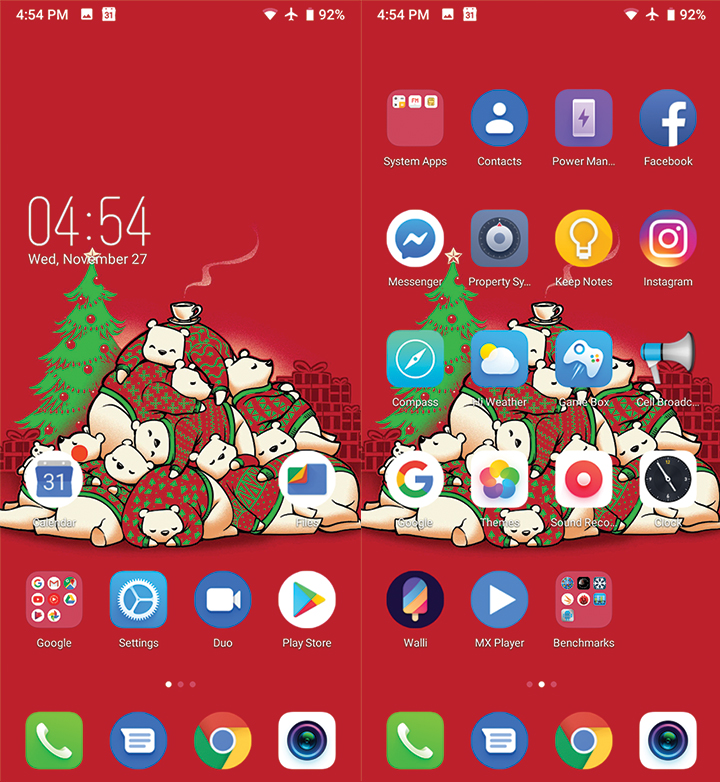 Google apps are pre-installed in the Flare S8 Pro, as well as third-party apps like Facebook, Messenger, and Instagram. Cherry Mobile also included a Game Box app that optimizes and enhances the smartphone’s capabilities for gaming. Internally, the Flare S8 Pro has 64GB of storage, with about 55GB of it usable. For users who want bigger storage, the S8 Pro can be expanded up to 512GB via microSD. 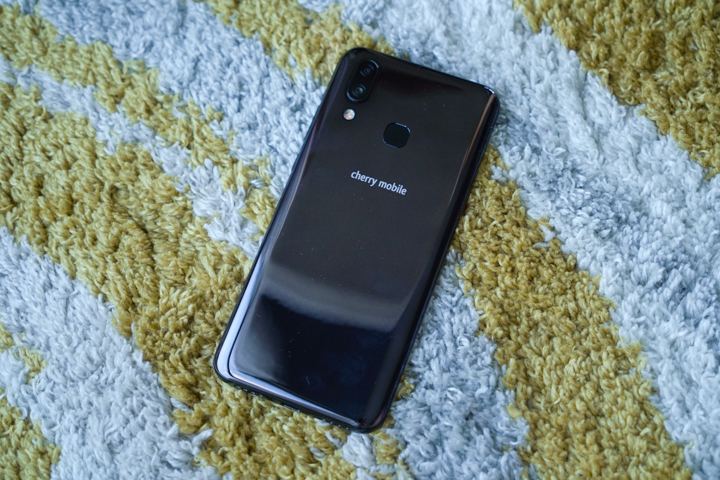 The device has a rear-mounted fingerprint scanner and face unlock as its security measures. Both modes take a while to kick in and unlock the device, but they still work.

When it comes to cameras, the S8 Pro has a 20MP + 5MP setup on the rear and a 20MP front camera inside the drop notch. Aside from the usual video and photo modes, there are several modes such as Beauty, FaceCute, which has AR stickers, Bokeh, and Portrait mode. 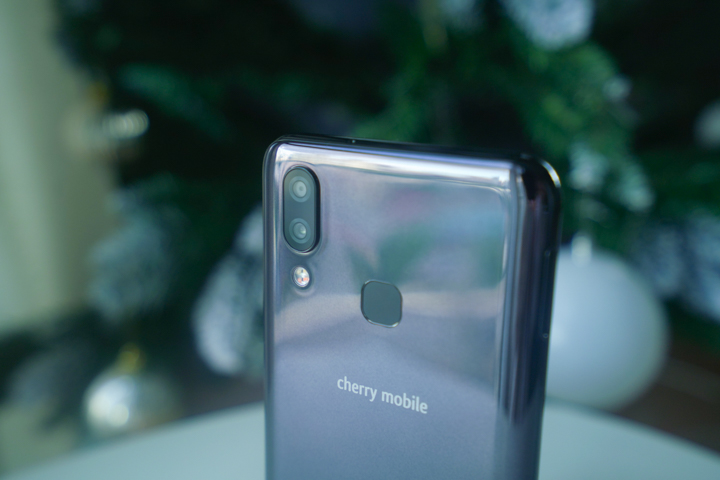 Selfie-wise, the S8 Pro produces images that are slightly washed out, and details aren’t too sharp either. A lot of times, the camera’s response rate can be rather slow, and so, the photos end up as a blurry mess due to subject movement. In portrait mode, the subject-background separation is somewhat weak, as parts of the subject end up getting blurred as well.


As for the rear cameras, color reproduction is somewhat saturated but good enough, while the sharpness of detail is pretty average. There’s also a delay between pressing the camera shutter and the app taking a photo, resulting in a blurry photo as well when the subject moves right after. Portrait-wise, similar to the selfie, the subject-background separation isn’t too good with parts of the subject end up getting blurred.


For video, the Flare S8 Pro can shoot up to 1080p. The S8 Pro doesn’t offer video stabilization, and focus lock is also somewhat tricky to pin down. We recommend using a tripod or a monopod when shooting videos.

Packed in the S8 Pro is a MediaTek Helio P22 chipset, coupled with a PowerVR GE8320 GPU and 4GB of RAM. Take a look at the benchmark scores: 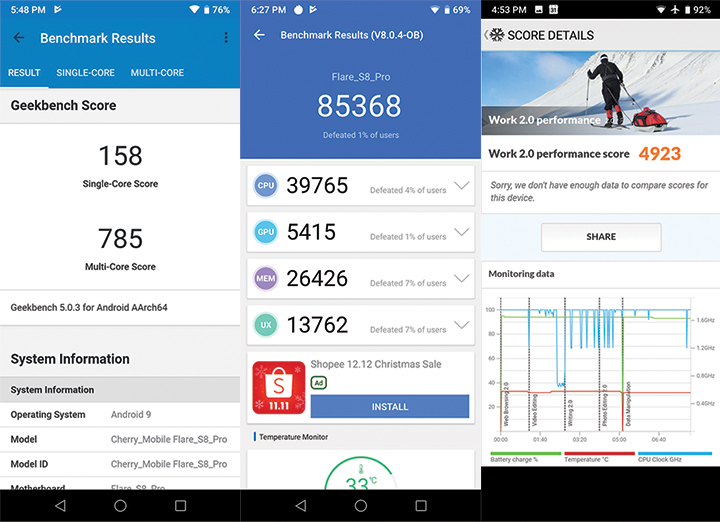 The Flare S8 Pro can carry out tasks such as web and social media browsing, media viewing, and file transferring without issues. However, navigation is slightly sluggish even when there aren’t any apps running in the background. Gaming-wise, we tried out Call of Duty and Asphalt 9, and in both games, there are evident frame drops and lags. We also tried out playing using the Game Boost mode, and while there are still frame drops from time to time, the gameplay is much smoother. 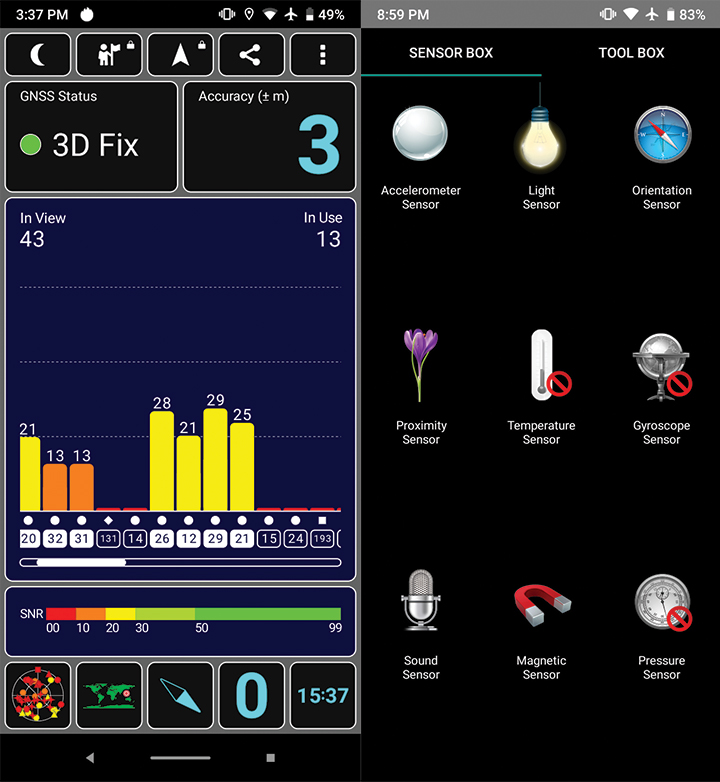 Cherry Mobile’s Flare S8 Pro might have a few misses here and there, such as the yellowish screen tint, substandard selfie quality, and slightly sluggish navigation. Despite that, the S8 Pro makes up for it in other aspects, such as its fairly bright panel, moderate rear camera quality, and modest battery life. 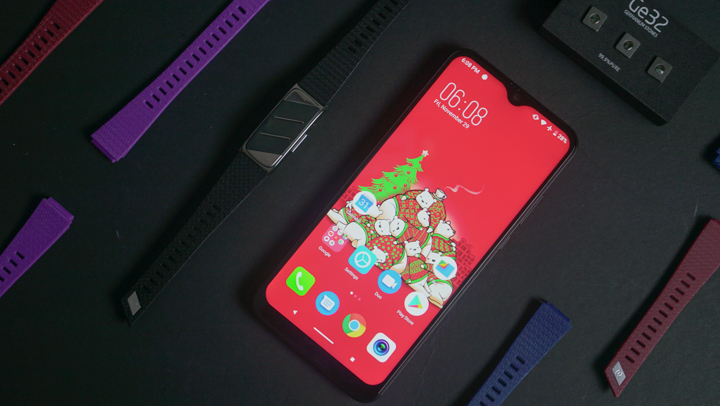 For its price tag of PHP 5,999 (bundled with a HELO LX Wellness Band), the S8 Pro is a pretty decent smartphone. Additionally, there’s not a lot of smartphones out there that offer 4GB RAM and 64GB in the price range of under PHP 6K. If you’re under a tight budget and looking for a day to day smartphone, do include the S8 Pro among your choices.