Lenovo’s Yoga series has been known as the brand’s premier lineup of portable laptops. This time, we put our spotlight on one of its latest convertibles, the Yoga C940. Apart from its compact design profile, the 2020 iteration of the Yoga C-series is equipped with a webcam shutter, fingerprint scanner, and pen support capability, which makes it ideal for people who are seeking on-the-go productivity with an extra budget to shell out. Is it worth spending on? Read more below to find out. 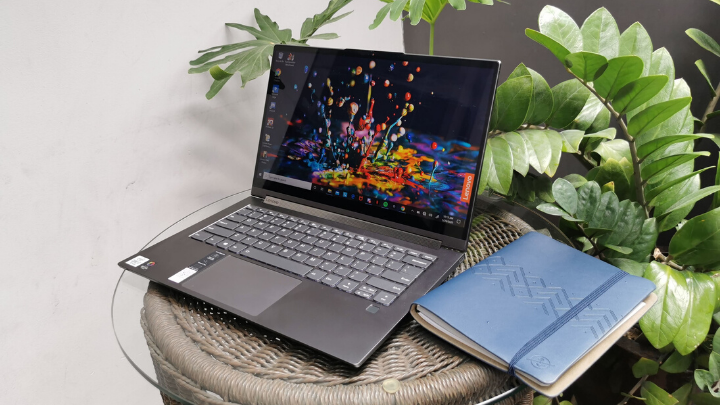 Just like its predecessor, the Yoga C940 sports a solid build. It retains its light aluminum body in a metallic finish with the iconic Yoga logo located on the top left corner of the lid. It is available in two colorways: a lighter Mica and a darker Iron Grey, which what we got. Weighing at just 1.35kg, you can easily lug it on any standard-sized backpack. 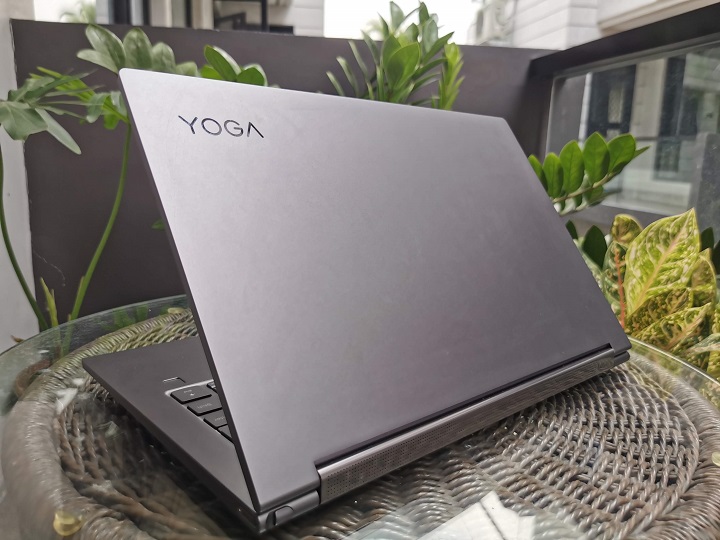 At the bottom of the lid, you’ll find the iconic ledge with an etched  Yoga 9 Series. 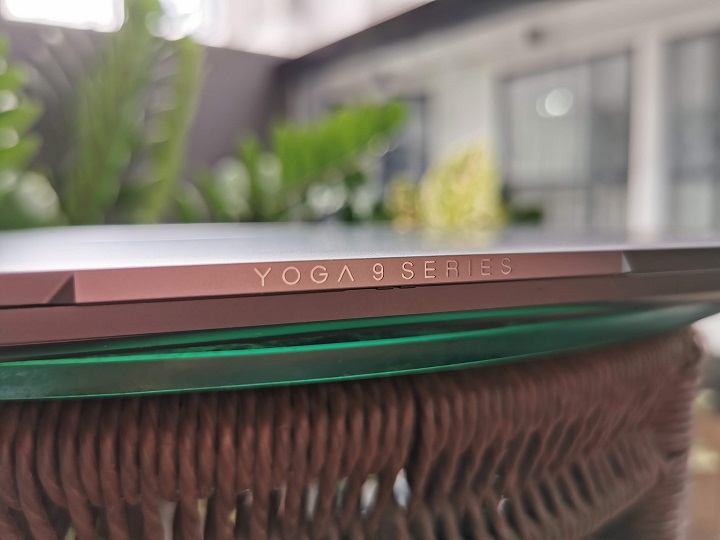 In exchange for its slim body, it provides only the basic ports such as a USB-A, two USB Type-C ports that support DisplayPort passthrough, PD charging, and Thunderbolt, and a 3.5mm combo audio jack. Should you want to add another USB Type-A, you’ll need to use an adapter or dongle as it doesn’t include one. 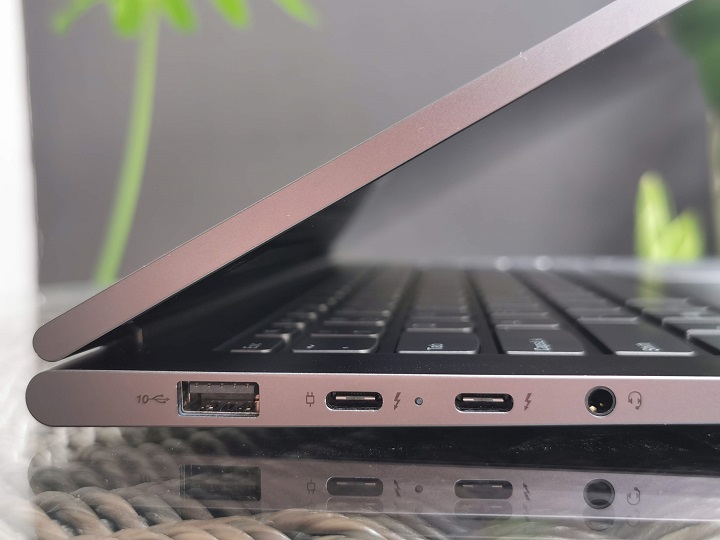 The case is different on its opposite side as you’ll only see the thin, rectangular power button with an LED indicator. You’ll also see the integrated pen with 4,096 pressure sensitivity levels garaged at the back of the laptop. 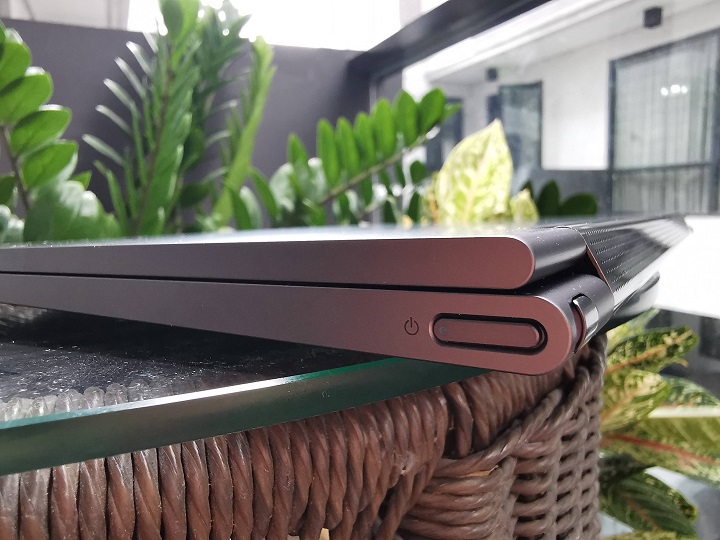 Inside, there’s the 14-inch Ultra HD touch display with narrow side bezels. The screen is connected by a hinge that’s also a rotating soundbar. And since it is a 2-in-1 laptop, it can be flipped and used as a tablet. Located at the top is the 720p webcam with a TrueBlock Privacy Shutter for covering it when not in use. Surprisingly, it doesn’t support Windows Hello. Just like its counterparts from the Yoga S-series, it adopts the same scissor-switch, chiclet-style keyboard that shares arrow and navigation keys through the Function key. It’s quiet, tactile, and comfortable to type on. It also has white backlighting, which can be activated by pressing the Fn key and Spacebar. Below it is a large, responsive trackpad with tactile left and right buttons. But for those who have sweaty hands like mine, the touchpad isn’t for you. It has a matte finish which attracts more fingerprints and smudges. On its right is the small fingerprint scanner for secured login on Windows. 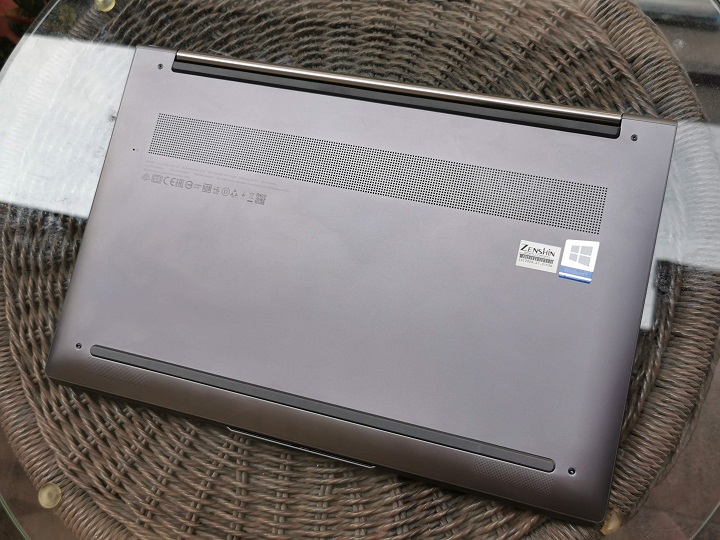 Underneath, you can see a slim, horizontal rubber foot and a large exhaust vent. Beneath the rubber foot is two downward-firing speakers.

As we’ve mentioned previously, the laptop has a 14-inch touch screen display with a UHD resolution. Ideal for digital artists, the screen gets a VESA-certified DisplayHDR 400 certification for color accuracy. This produces images in punchy colors and better contrast, which makes the viewing experience more immersive even in tablet mode. It can also go up to 500 nits of brightness, lessening the glare when used outdoors. To complete the package, it had touch support for digital illustration, navigation gestures, and even simple scrolling of web pages. The pen is responsive with low input latency, but it might be too small and slim for those who want a better grip. More than just a place to rest the pen, its slot allows the charging of the pen on its slot. We also love the duality of its display, which enables users to adjust the angle of the screen more than 180-degrees. Its Dolby Atmos-powered, rotating soundbar also got our attention. It exceeded our expectations, delivering solid and pleasant audio quality even on its maximum volume and in tablet mode. Backed up with two back-firing speakers, it does a decent job when watching via Netflix or YouTube. The microphones are also doing well on audio conferences over Discord. 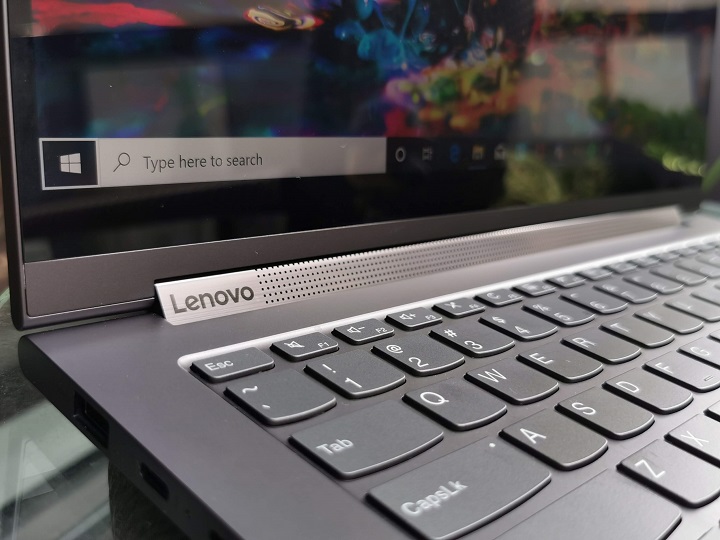 The Lenovo Yoga C940 runs in Windows 10 Home 64-bit and is preloaded with applications such as Microsoft Office, Paint3D, Xbox Game Bar, Skype, McAfee LiveSafe, and even Roblox. A plethora of Lenovo apps is also present, such as  Lenovo Vantage, Lenovo Pen Settings, and Lenovo Utility. The 2-in-1 laptop supports 1TB SSD. However, the variant we got has 512GB of SSD with 475GB left after installing Windows and 433GB available to use. And since its SSD is soldered, you’ll need to use an external hard drive for storing other files if the 512GB isn’t enough. 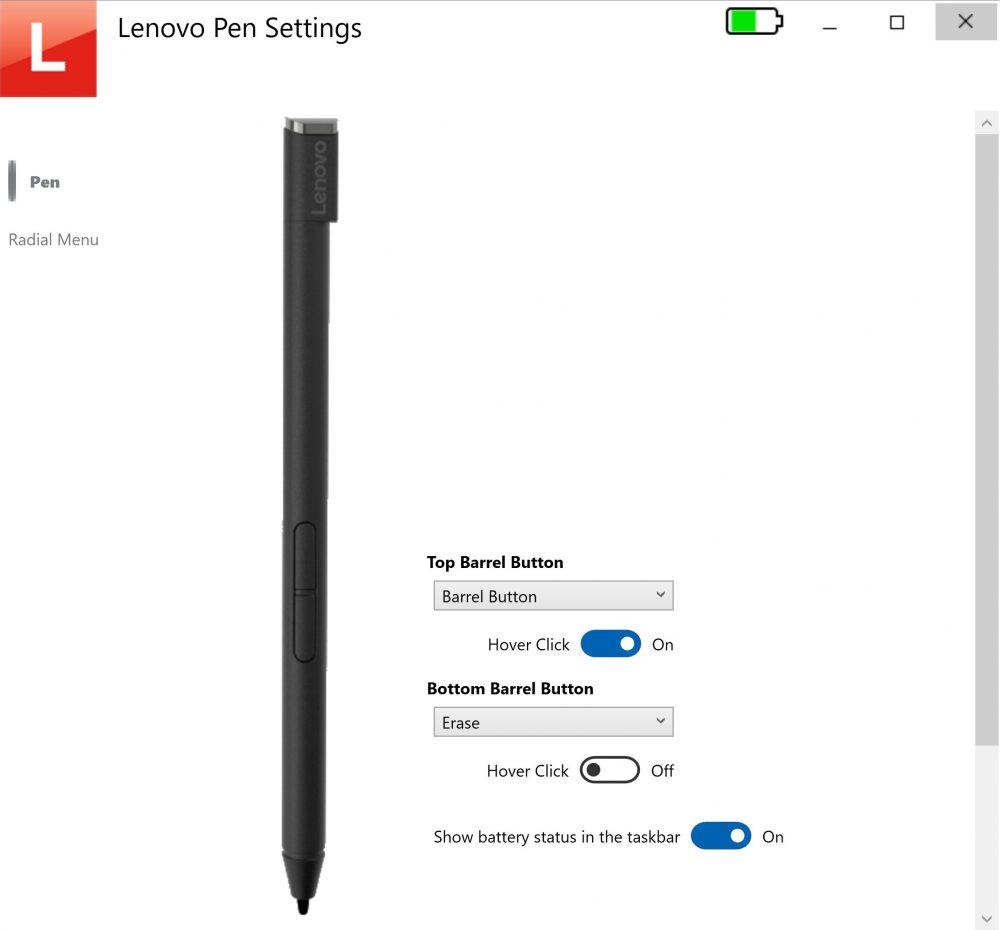 Meanwhile, the Lenovo Pen Settings lets users adjust the pen sensitivity and assign commands for its buttons.  This also shows the pen’s battery status and a radial menu for setting functions on the pen when in use.

Powering the Yoga C940 is a 10th-generation Intel Core i7-1065G7 CPU, Intel Iris Plus Graphics, 16GB with  RAM, and a 512GB SSD. We ran a series of tests in a room with normal temperature to measure its processing power and GPU performance. For CPU, we used Cinebench R20 and Unigine SuperPosition for the GPU. We also ran PCMark for gauging its performance in both departments. 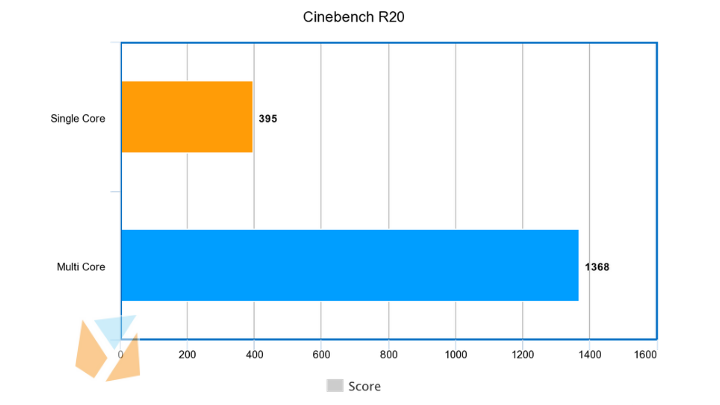 Based on our results with Cinebench, Yoga C940’s performance is also in line with other laptops equipped with other ultrabooks adopting Intel’s Ice Lake core architecture as the 2020 iteration of the 13-inch HP Spectre x360. 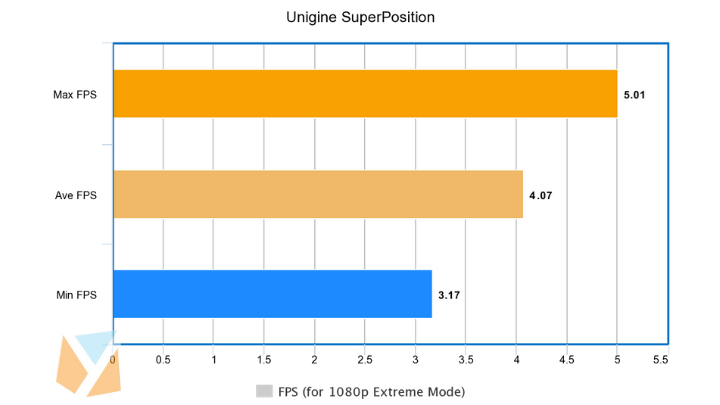 Thankfully, Intel’s Ice Lake processors feature the much faster Iris Plus graphics. It performs much better than the inferior UHD Graphics and should be able to handle the 4K display better.  The convertible laptop also gained decent results while running the SuperPosition benchmark on both 4K and 1080p modes with scores of 677 and 543, respectively.

In terms of overall performance, the ultrabook can handle productivity tasks such as creating and opening documents, heavy web browsing, and basic photo editing. The temperature may rise at the bottom and can be felt on the keys while charging, so you’ll have to place it on a desk. Generally, it’s cool when running most of the tasks. 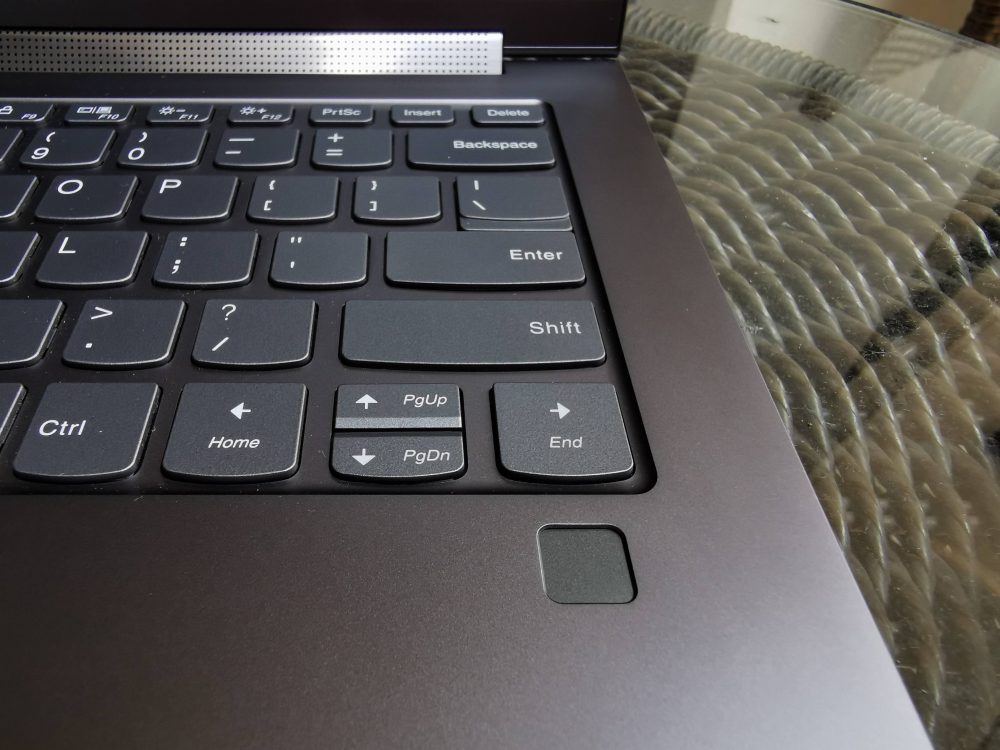 On paper, Lenovo said that it could last up to 10 and a half hours. It also supports 65W RapidCharge technology through USB Type-C, which charges the device’s battery swiftly in an hour up to 80%. To test the battery life, we ran the Yoga C940 through our usual 1080p video loop test with 50% brightness, 50% sound in loudspeaker mode,  and balanced power setting. It recorded almost 8 and a half hours of battery life, which is two hours less than Lenovo claims. Charging the device from 0 to 100 percent would take about 3 hours and 15 minutes. 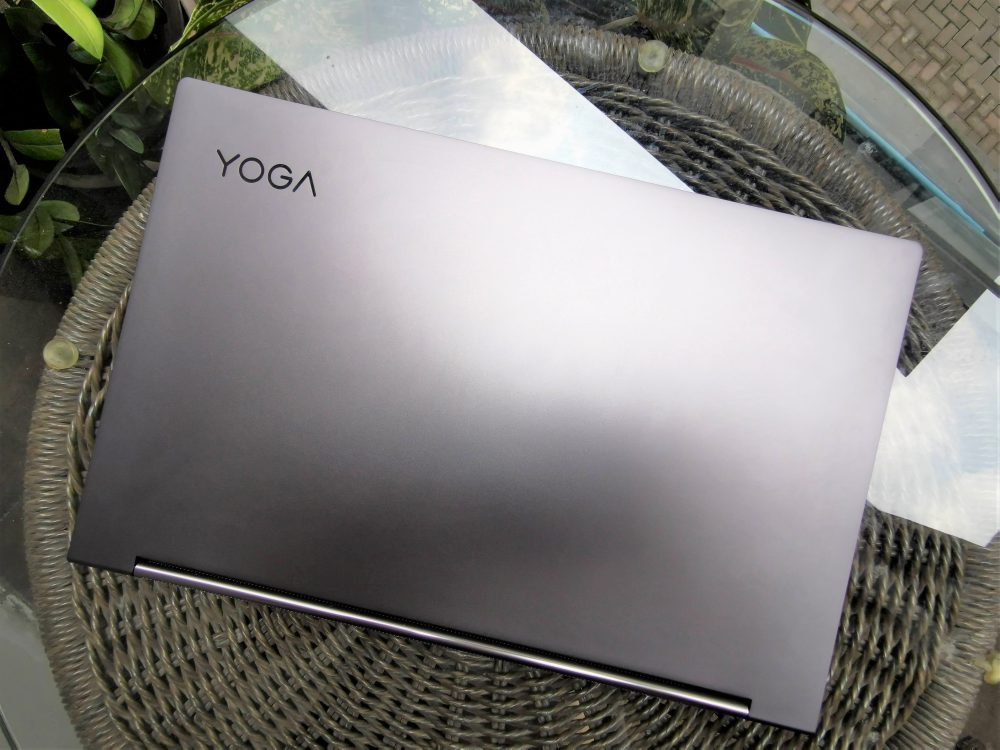 The Lenovo Yoga C940 is a stylish premium convertible with lots of aces under its deck. For one, it is simply a stunner in terms of design and very compact, which grants mobility to its users. It has enough processing speed to run most productivity apps and digital content software. In terms of entertainment, it delivers impressive visual and audio quality. However, for its price of PHP 99,995, the inclusion of a USB-C adapter for additional ports would have been nice. It’s also good that Lenovo made sure that the USB Type-C ports support  DisplayPort, Thunderbolt 3, and PD charging.

Given its specifications, the price is quite steep. But if you have enough money to shell out and you’re in the market for a flexible laptop that gets you the best of both worlds, and if the battery is not a big issue to you, then get the Lenovo Yoga C940. Otherwise, you may want to explore other choices and downgrade the display to FHD.  One good competitor is the HP Spectre x360 13 (2020). It has the same processor, RAM, and offers more internal storage at a more affordable price.