Today we’ll be taking a closer look at Logitech’s latest mid-range gaming mouse – the G500s – which recently made its official debut alongside its entry-level sibling, the G400s, as well as the high-end G700s.

The G500s is slated to succeed the now ageing G500. However, instead of a complete overhaul, Logitech just added a few improvements to give their current lineup a competitive edge while still keeping the same form factor that made its predecessor a hit among gamers. That said, it can be quite tricky to differentiate the G500s from the previous model just be merely looking at it. 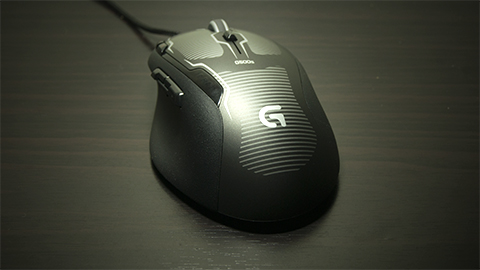 As a matter of fact, the only other dissimilarity between the G500s and its older sibling, besides the new gray-on-black paintjob, is the color of the DPI indicator on the left side of the top plate. Other than that, both mice boast the same pear-shaped body that’s thoughtfully designed for a comfortable use even for hours on end.

Although the G500s boasts a fairly large frame, it’s one of the more ergonomically-designed gaming mice we’ve used in recent times. Our hand falls perfectly on the G500s’ arched chassis, while its carved flanks provide a more secure grip thanks to its texturized surface. Moreover, the G500s’ top plate is treated with a hydrophobic and fingerprint-resistant coating which lessens slips for users with sweaty hands. 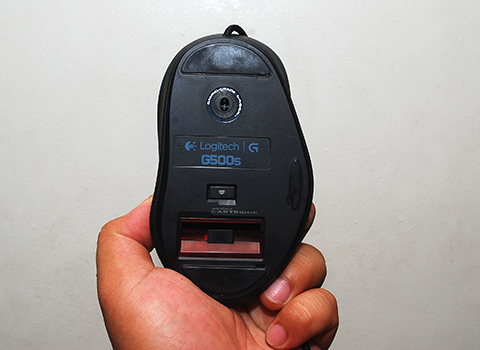 Flipping the G500s on its back will expose a trio of thoughtfully-placed rubber pads that creates a slight separation between the mouse and the surface. Logitech made room for the mouse’s branding which is sandwiched in between the “gaming-grade” laser sensor and an eject button for the weight cartridge.

There’s a carved section on the bottom of the G500s which houses the weight cartridge. The tray has six holes where you can put the bundled tuning weights to either adjust the pointer’s heft or the center of its gravity. 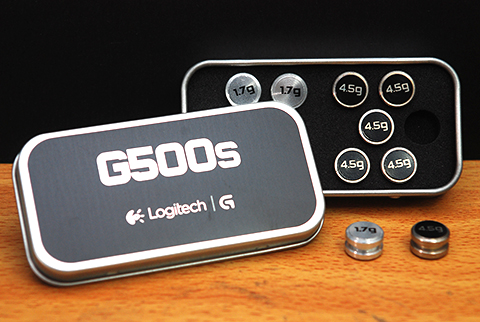 The G500s comes with 12 metal add-ons which come in two different weights; 1.7g and 4.5g. Users can choose to use a combination of both or go all out by using all the six 4.5g weights which amount to 27 grams worth of added heft.

In addition to the overall design, Logitech also used the same button layout of the G500 on this mouse. The buttons are relatively easy to reach without having to shift the position of our hand and are springy enough to provide good feedback when pressed. 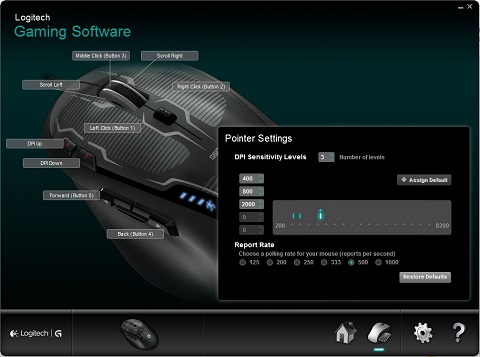 Excluding the clickable scroll wheel and the left and right click, there are an additional 6 buttons on the G500s. By default, these keys are pre-set to alter various features of the gaming mouse such as its DPI (+/- buttons on the top left) and scroll wheel modes (O/Ø key on the middle). In addition to its pre-programmed actions, these buttons can also be customized through a downloadable Logitech Gaming Software.

Of all of its customizations, one thing we liked the most is the ability to switch DPI on the fly. This is useful in FPS games where we need to quickly switch from a fast DPI to a less sensitive one for a more accurate aim using a Sniper rifle. 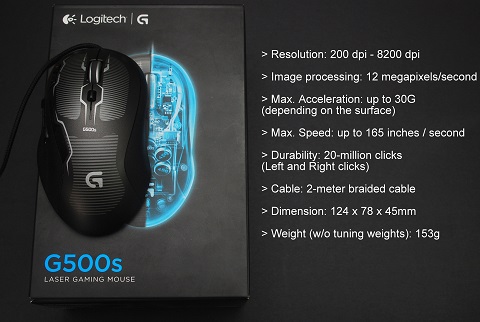 As the old adage goes, don’t fix something that isn’t broken. True enough, apart from the minor tweaks, Logitech has applied the same formula on the G500s which made its predecessor one of the top choices of gamers on a budget.

One of the things we liked most about the G500s is its body which has a well-engineered contour that follows the natural angle of the hand when holding a mouse. Although the buttons are a bit too recessed for our liking, we also like how each of them are conveniently placed and have just the right amount of give for a comfortable but reassuring press. Honestly speaking, we prefer using the G500s without the added weight brought by the bundled bearings, but if you’re type of user who prefers a heavier device, at least the mouse allows you to increase the weight to fit your needs.

So should you buy it? Well, if you’re currently using a G500, we think that you’re better off sticking to your gear for now, unless you really have to have that increase in DPI. However, if you’re in the market for an affordable gaming mouse, then we highly recommend the G500s which only retails for less thanPhp3,000.