In our previous post, we mentioned the announcement of Google-Asus Nexus 7 and some of the spectacular things that made us drool over it. But before the 7-inch tablet was announced, Google gave its viewer a taste of the OS that would run in it. Let’s see what we can expect out of the new OS.

To jumpstart the day 1 of Google I/O 2012, Hugo Barra, the man who oversees the Android Development operation, has formally announced their new OS flag bearer; Jellybean. So what does it bring to table? Not much I should say, or at least not as drastic as the transition from Gingerbread to Ice Cream Sandwich. The OS is basically built on top of ICS but with a little bit more focus on making a more stable and faster OS. The development team was able to achieve this feat through minor adjustments on algorithms, buffering, rendering and vsync much like what we saw with Linaro. 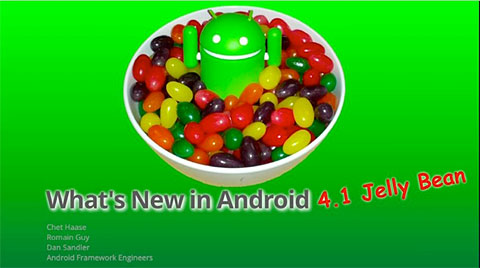 Unfortunately though, Google has NOT YET adopted Linaro’s simplistic approach on how to make the performance faster and smoother. But weâ€™re still keeping our hopes up that someday Google will learn a thing or two from Linaro and adopt some of the things theyâ€™ve done in the future versions of their OS.

The other improvements in this new version of Android have something to do with the integration of various Google services which enables users to be more efficient while keeping in touch with the people they value. Weâ€™re not going to delve too much on this and reserve it for our full review of the OS once we get our hands on one of the Google-ASUS Nexus 7 or wait for the official OTA in the coming weeks (or an official one) whichever comes first.

For now here’s a rundown of these improvements and/or changes with Android 4.1:

â€¢ Search results are much faster and are more comprehensive.
â€¢ New Google Knowledge Graph which returns search results based on the type of search done. As shown in the demonstration, when a user searches for a celebrity, the search results will show users a photo and a bit of info about that celeb.

â€¢ Google Now, a neat feature of the Search functionality that learns as you use your phone. By having these knowledge about the user, Google Now can give you a schedule of the buses, which route to take for a faster and more convenient trip, and what are the restaurants around the area. It can also give its users an up to date score on the user’s favorite team.

As if that wasnâ€™t enough, Google Now can also help a user our on his out of town trips by assisting its user to which airport terminal to go to and also does a currency conversion (Another kick to the balls for Siri, if it has one).

â€¢ This feature is meant for developers that enables to compose short messages which is in turn is sent to their users on their Android devices.

â€¢ Weâ€™ve initially seen this feature on the Samsung Galaxy SIII. But this feature will now be a standard for Jellybean and hopefully in the next versions.

â€¢ If youâ€™ve used a third-party keyboard application in the past to make typing a breeze, the new stock keyboard on Jellybean will blow you away. From words to punctuations, the new keyboard learns as you type and automatically adjusts to your typing needs.

â€¢ Though this is a great additional feature, many have been disappointed by it, especially when compared with Nokia Drive. There is a lot of work to be done to improve this feature. But the key thing here is that it’s there and that it’s only a matter of time for developers to enhance it.

â€¢ Say goodbye to the slow and boring default browser as Jelly Bean will now have Google’s very popular browser and everything that you love about it and more.

â€¢ With the latest Android you can now compose text, return call and do other things straight from the notifications.

â€¢ There are also some minor enhancements on the camera app which makes reviewing and managing your pictures easier.

As predicted, the Android Jelly Bean is more of a major update than an entirely new OS. But it has been a pretty marvelous update to say the least. In addition to it being faster and smoother in terms of handling tasks, what we most liked about it is that it is more user-centric. Unfortunately for us, we wonâ€™t be able to take full advantage of those features as some are limited to USA or other first world country.

Nevertheless the enhanced OS brings interesting and very useful features to our devices like the use of Chrome as browser, more intuitive keyboard and enhance Notifications. It will be interesting to see how Jelly Bean would fare against iOS 6 and Windows Phone 8, but for sure it will put up a good fight.

Another thing for Android users to rejoice is that an OTA update will be rolled out by mid-July for Galaxy Nexus and Nexus S devices around the world and the source code will be given to developers and device manufacturers 2-3 weeks ahead of the OTA update so they can port the enhanced OS to your beloved Android devices. This is definitely something to look forward to and be sure to stay tuned for any news about the said update.

So that pretty much sums it up. That’s our brief overview of the Android Jelly Bean. Be sure to catch our full review of the OS as well as the Nexus 7 in the coming months.