Project Volta gets tested, adds life to your Android's battery

Project Volta gets tested, adds life to your Android’s battery

Project Volta, a new initiative that will debut with Google’s Android L which aims to improve your Android device’s battery life, gets tested to see if it works. And based on the results, it looks like it is going to deliver what it promises.

Like Android Jellybean’s Project Butter which allows UI animations to run at 60fps, and Android KitKat’s Project Svelte which allows the OS to run at devices with 512MB RAM, Android L’s Project Volta also aims to address one of the main issues that’s been plaguing some Android devices, in this case it’s battery life. 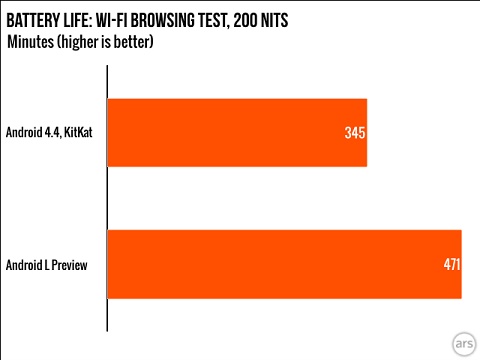 Ars Technica’s Ron Amadeo tested the capabilities of Project Volta by flashing an Android L preview on a Nexus 5, ran the tests, and compared it to a fresh Android 4.4.4 KitKat on the same device. The result? 36% more battery life, which is a substantial amount of juice. Not to mention that they only used a developer preview version of Android L.

In addition, Android L also includes new battery saving features like JobScheduler, Battery Historian, and a battery saver so things could only get better when Android L officially rolls out.

For more details about the test just head to the source link below.