Now that two of the major networks have gone completely online with their prime time news broadcasts streaming on Facebook and YouTube, their impressive performance could give us a good glimpse of the online viewing behavior of a typical Filipino family.

With ABS-CBN shifting all their TV programs to digital, rival GMA Network also prompted to (globally) broadcast their own news programs on Facebook and YouTube (although they’ve been doing so domestically for some years now). GMA 7 still has its regular free-to-air TV broadcasts while ABS-CBN has none, except for its cable channels and the TV Plus.

TV Patrol viewership on Facebook/YouTube during the 1st week of online broadcasts.

We were told by a network insider that this impressive showing of TV Patrol on Facebook/Youtube was the catalyst for GMA 7 to finally broadcast (globally) their news programs on the same platforms.

Both network’s performance on Youtube and Facebook gives us a good glimpse of their reach and answer quite a number of interesting questions:

So we went through the last 2 weeks to check the latest views from streams on Facebook and YouTube. We also took a spot check on the peak concurrent views for both platforms and monitored the post-stream gains in video views for the next 12 hours after the stream.

24 Oras is also showing a slight downward trend although not as prominent as that of TV Patrol. The program got a 14-day high of 2.43 Million last May 21 and a low of 379K last May 23 (which is noticeably very low compared to the other 13 days). 24 Oras’ viewership is generally flat but manages to kick better than average viewership every few days.

The same observations can be made in the YouTube livestreams. 24 Oras generally performed better than TV Patrol in all the last 14 days of the broadcast with TV Patrol getting an average of 325k views and 24 Oras getting 524k views.

We also observed a downward trendline in both ABS-CBN and GMA 7 with the former being more prominent.

As for concurrent views, we watched both FB and YouTube streams of the two networks simultaneously and took the peak viewership during their 2-hour broadcasts. Here, we noticed that more people are watching the livestreams on YouTube rather than Facebook.

TV Patrol was peaking at around 17.1k concurrent viewers while 24 Oras was somewhere around 17.4k viewers on their Facebook live channels.

On YouTube, their numbers are better with TV Patrol getting a peak of 55k viewers and 24 Oras closing in at 60k viewers at its peak. This is a stark contrast during the 1st week of their online broadcasts where FB Live was getting way more eyeballs (up to 190k for TV Patrol).

At the end of the YouTube stream last night (May 26), TV Patrol already got 30k views for their broadcast while 24 Oras only got 17k views. However, these numbers continue to grow in the next 12 hours. By 7am the following morning, TV Patrol attracted 257k views while 24 Oras jumped to 422k views.

Also worth noting the total number of followers/subscribers of both networks (as of May 30, 2020): 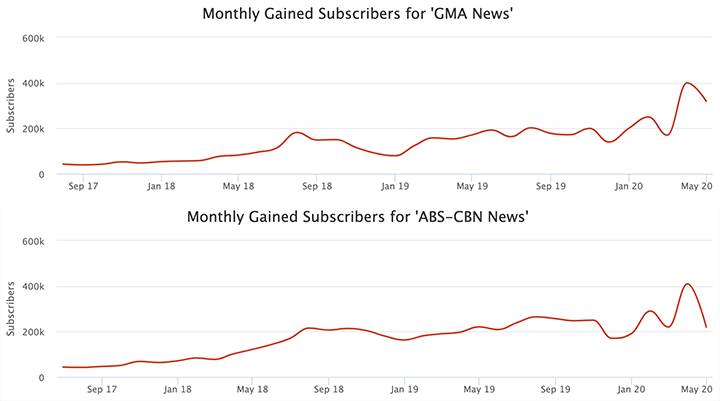 Looking at all these data, we can make some rational observations about viewing behaviors of the average Filipino, relative to the broadcast performance of the two networks:

Editor’s Note: An earlier chart of YouTube subscribers incorrectly used “GMA Network” (17.1M) stats instead of “GMA News” (6.45M). This has been corrected.