HP has a new line of laptops called the Victus, which sits under the more premium Omen line, and one of its latest offerings is the Victus 16 that packs a 16.1-inch screen with a 144Hz refresh rate, and powered by an AMD Ryzen 5800H processor and NVIDIA GeForce RTX 3050 GPU. Let’s find out how well it performs in this review. 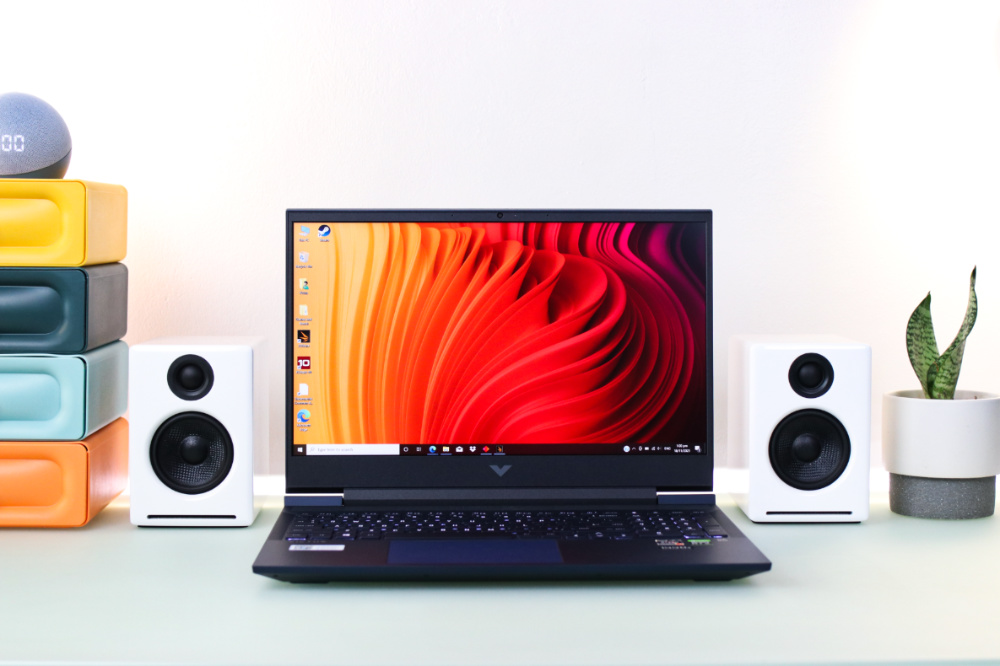 One of the first things we liked about the Victus 16 is its attractive design. Although it’s a gaming laptop, it’s sleek with nicely implemented angles which are mostly observed at the back. 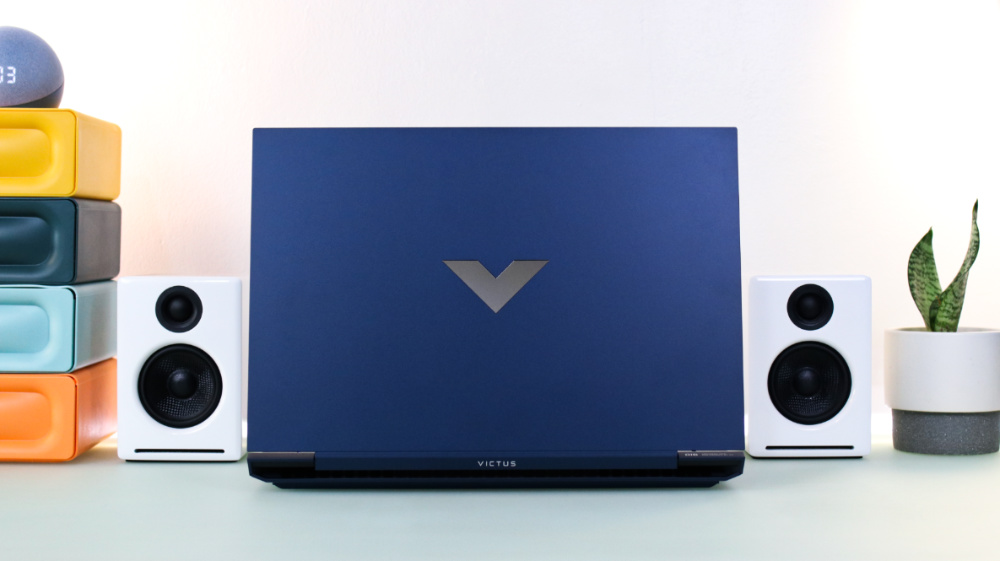 It’s mostly plastic, but the paint job makes it seems like it’s sandblasted aluminum. It comes in Mica Silver, Ceramic White, and Performance Blue, which is the model we have right now. 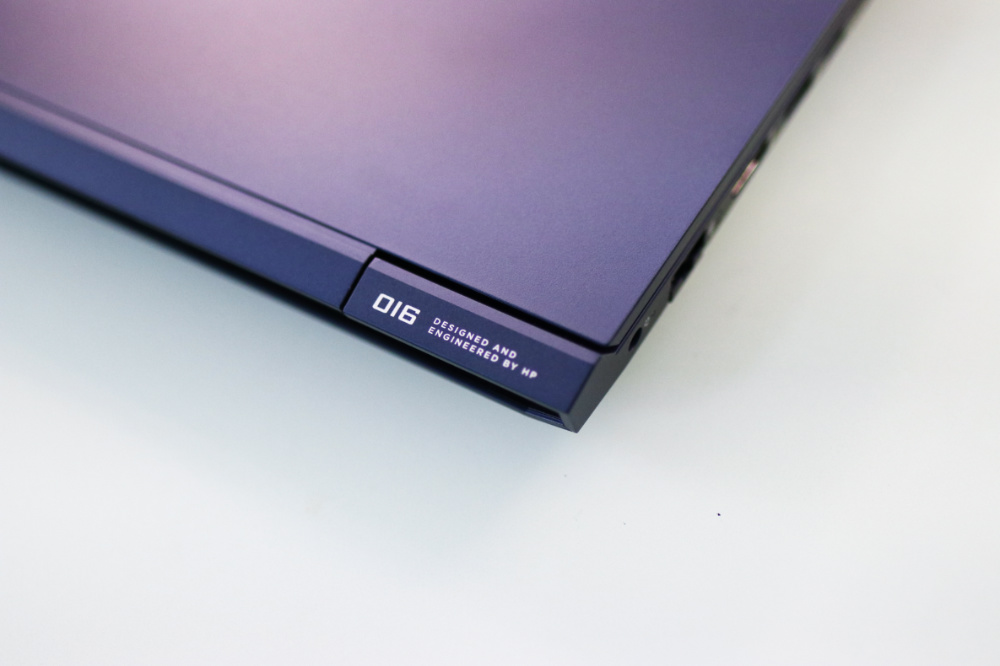 The design is pretty low-key, with just that reflective ‘V’ badge at the center of the lid and the printed model number one side of the hinges. 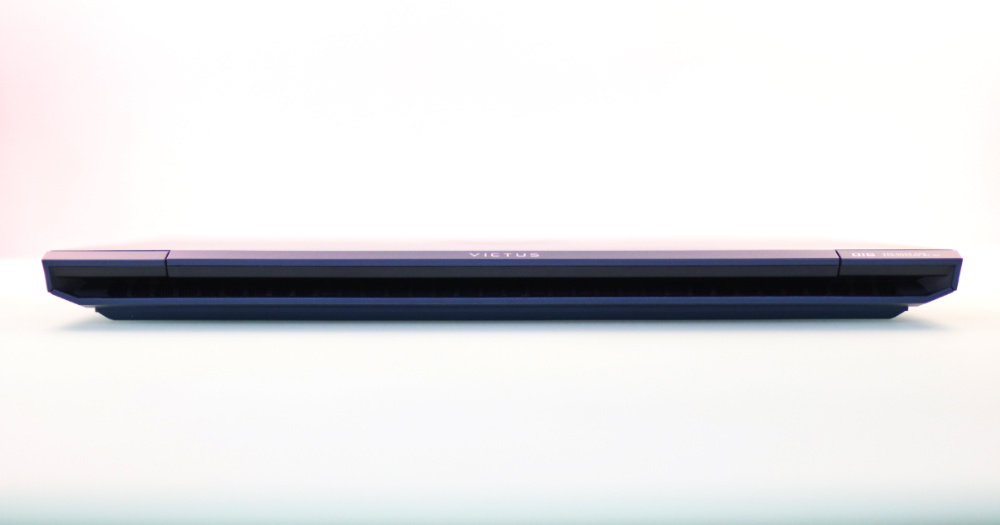 Found at the back are the vents. 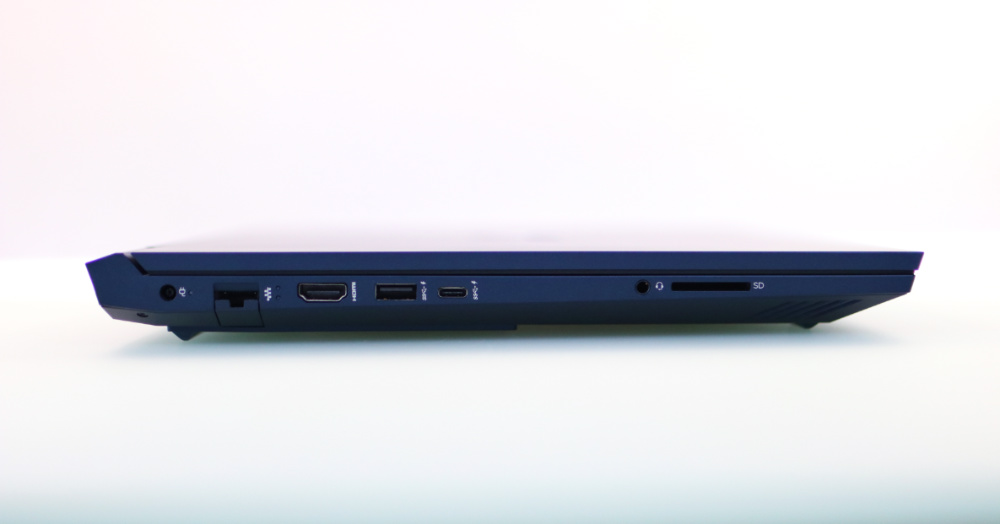 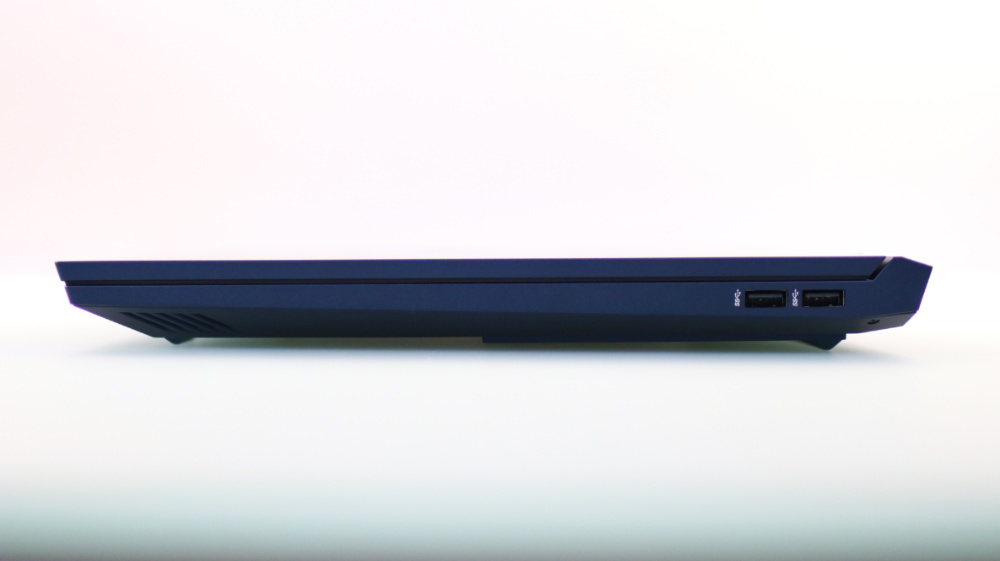 On the right are the two SuperSpeed USB Type-A. 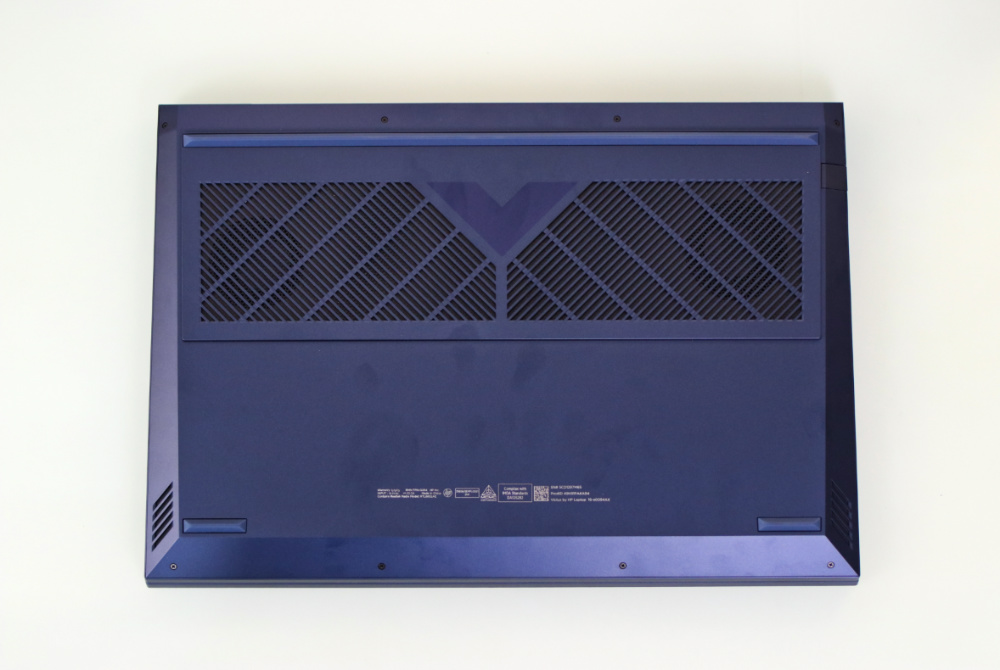 At the bottom are the loudspeakers, rubber feet, and intake vents.

Open the lid and you will see the 16.1-inch screen with a thick bottom bezel. Found at the top are the 720p webcam and microphones.

The hinge is firm and adjusts smoothly. However, the whole screen flexes a bit from the hinge before you can fully move it. It also wobbles when you flick it. It’s not really a bad thing but just feels weird. 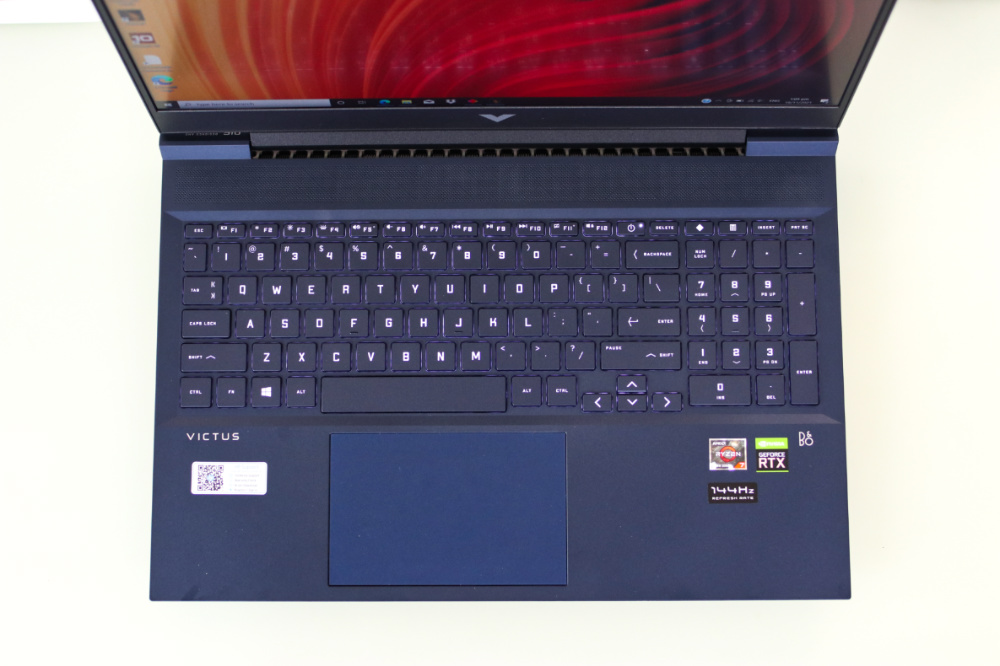 Down below are the backlit keyboard. It doesn’t have RGB and only has a white backlight without any brightness adjustment. It looks cool as it uses a modern computer font. It has a dedicated NumPad and buttons for the Omen Gaming Hub and Calculator.

The keys are well-spaced, quiet, and nice to type on. The trackpad, on the other hand, is large and smooth. It offers very stable left and right clicks without significant flexing. 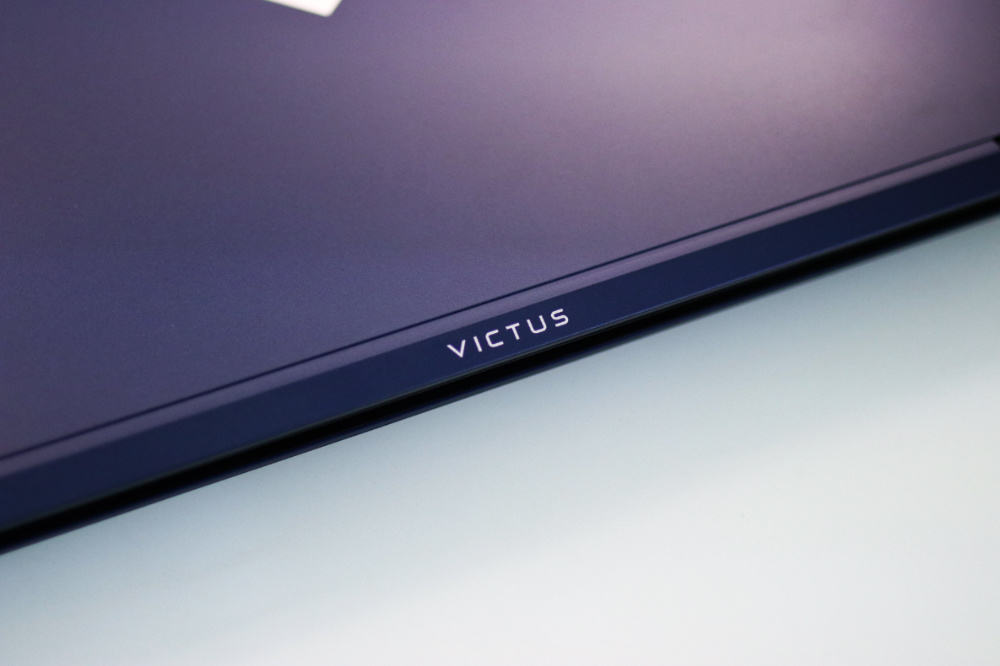 Overall, we have nothing serious to complain about the Victus 16’s design. The screen wobble is weird, but the whole laptop is attractive, still feels premium even though it’s mostly plastic.

The Victus 16 features a 16.1-inch Full HD IPS display with a 144Hz refresh rate and 300nits of brightness, which is a sufficient screen for work and play. The bottom bezel is thick, though, but not at all a distraction and makes the screen look like it’s floating. It’s still immersive, vibrant, with punchy yet accurate colors. The high refresh provides smooth animations and transitions, especially in games with high frame rates. 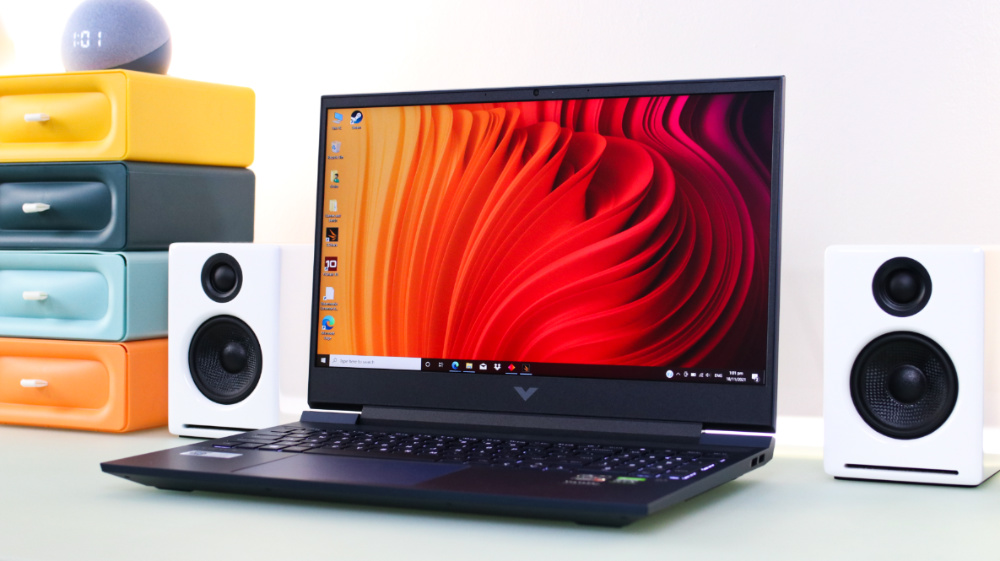 When it comes to audio, the Victus 16 has two speakers placed on the left and right-hand sides underneath the laptop. Sound quality is good for a laptop and is enough for online meetings, casual watching of videos on YouTube or Netflix, even gaming. The bass is not that powerful, like most laptops anyway, but not a big issue. If you really want an immersive experience, we still recommend using external speakers or headphones. 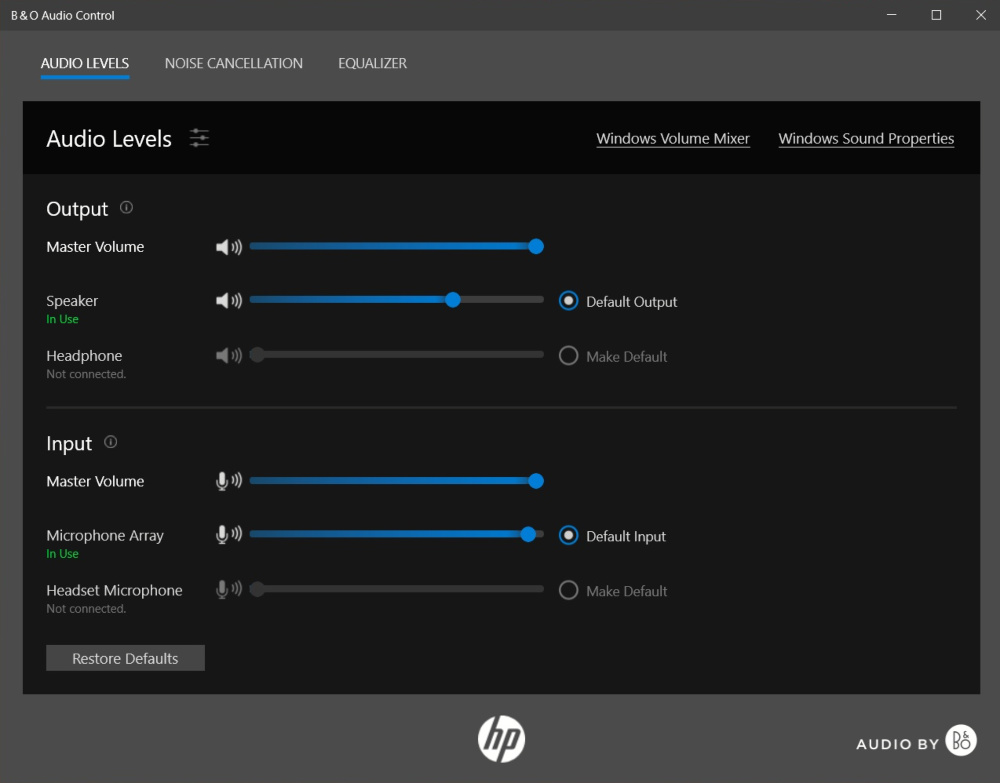 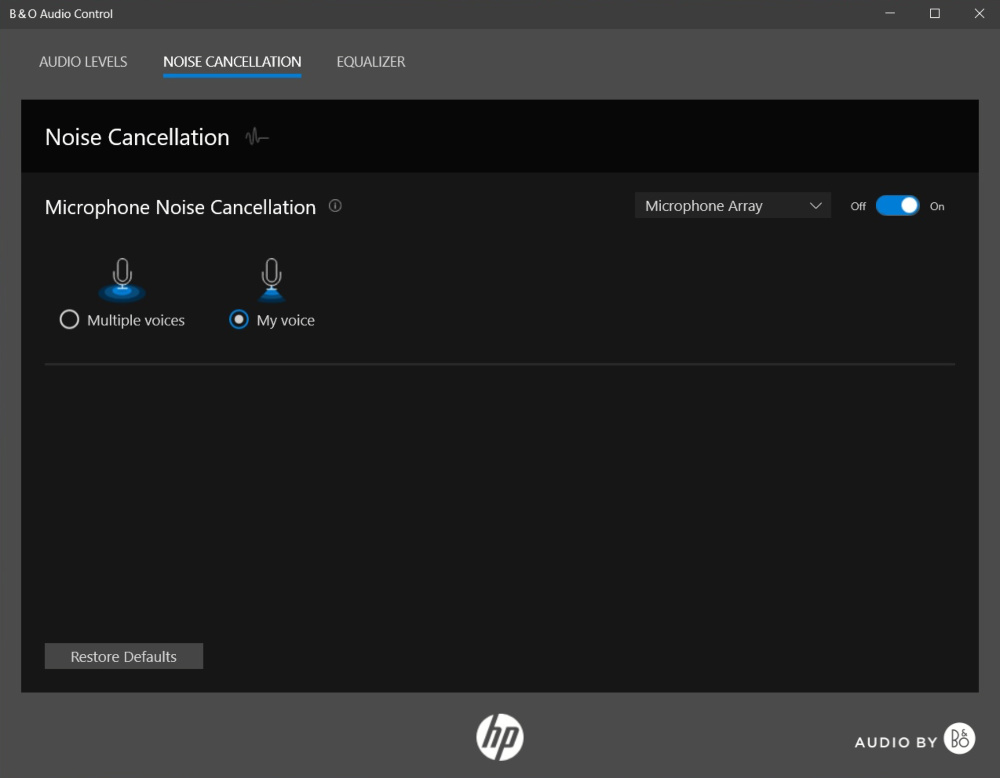 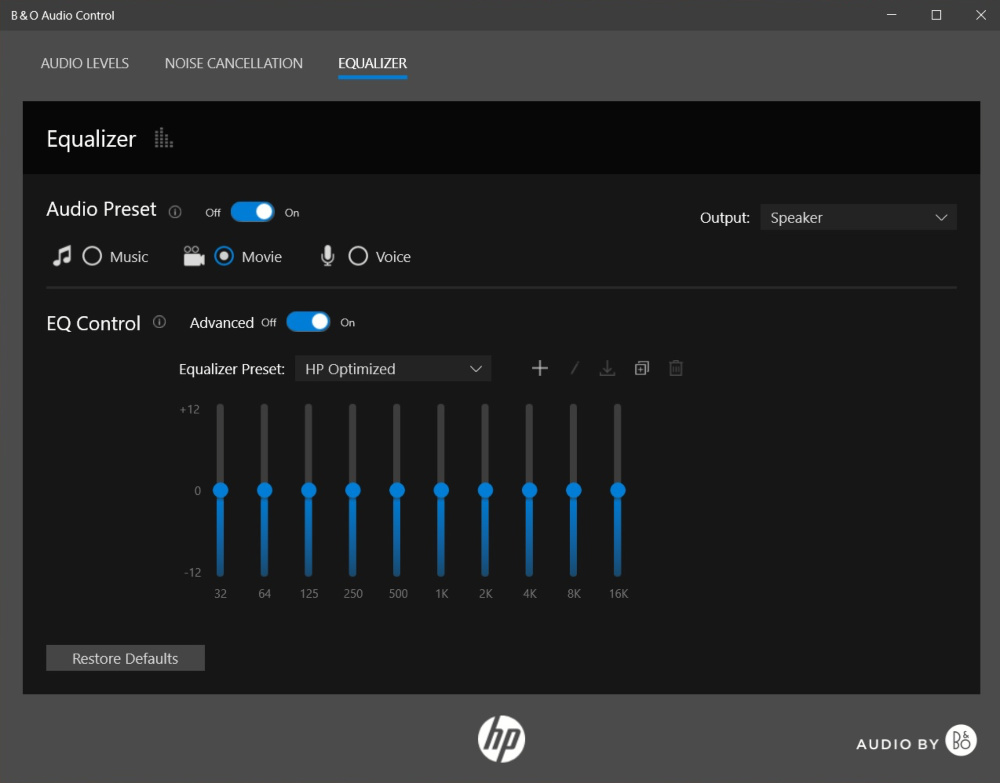 Audio is powered by Bang & Olufsen and comes with a B&O Audio Control. From here you can adjust audio levels, use its noise-canceling feature, and tweak the equalizer.

The Victus 16 runs on Windows 10 and comes pre-installed with HP software as well as McAfee and ExpressVPN. But what people would mostly interact with on this laptop is the OMEN Gaming Hub. 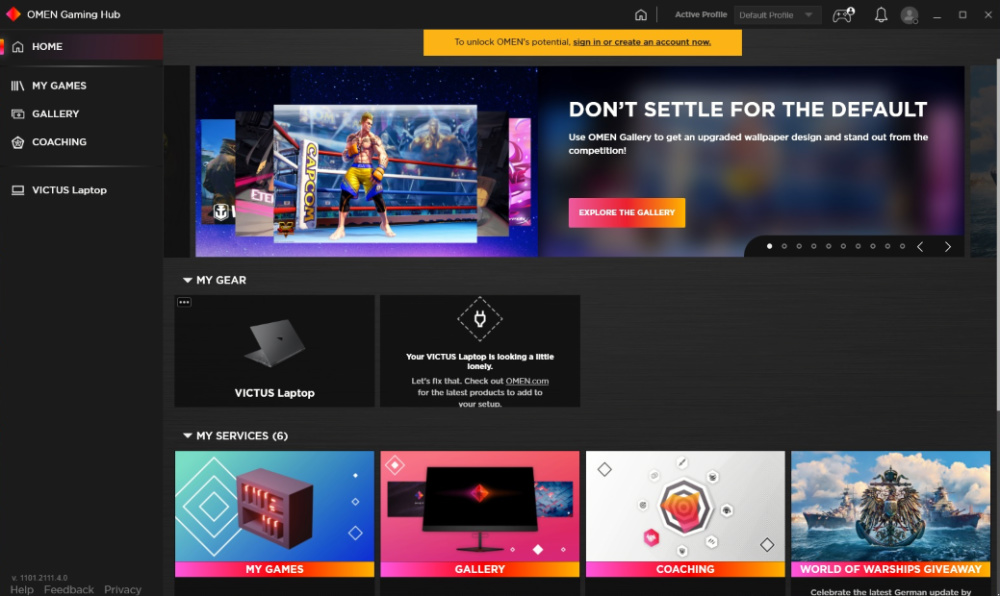 It’s a dashboard that gives you a consolidated library of your games, a gallery of wallpapers to use, as well as system stats to help you monitor the Victus 16’s performance, including temperature. 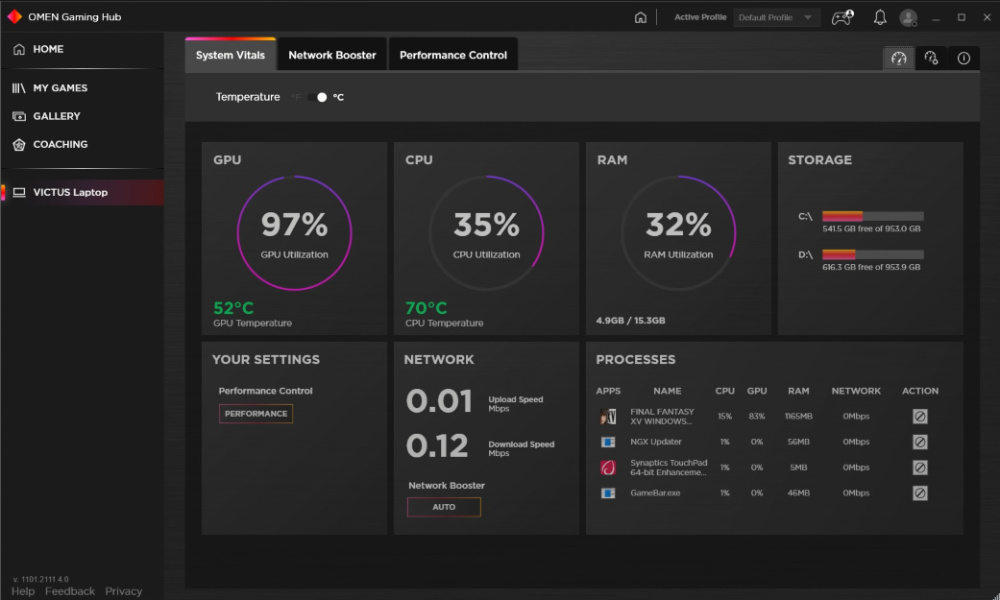 You’ll be able to see CPU and GPU utilization and temperature, remaining storage, running processes, and internet download and upload speeds. You can also take advantage of Network Booster to control what application the Victus 16 should prioritize in terms of internet usage. 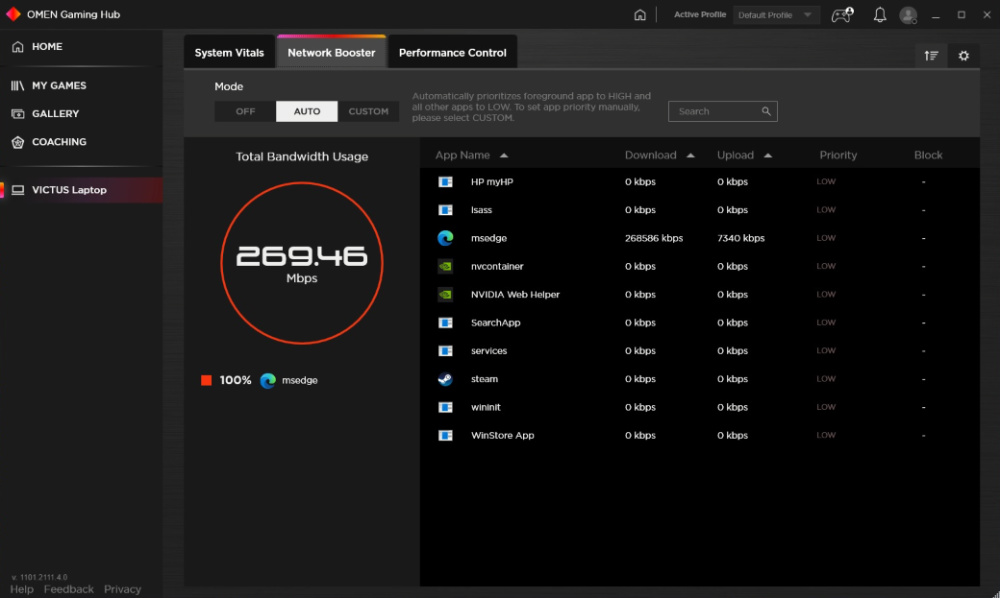 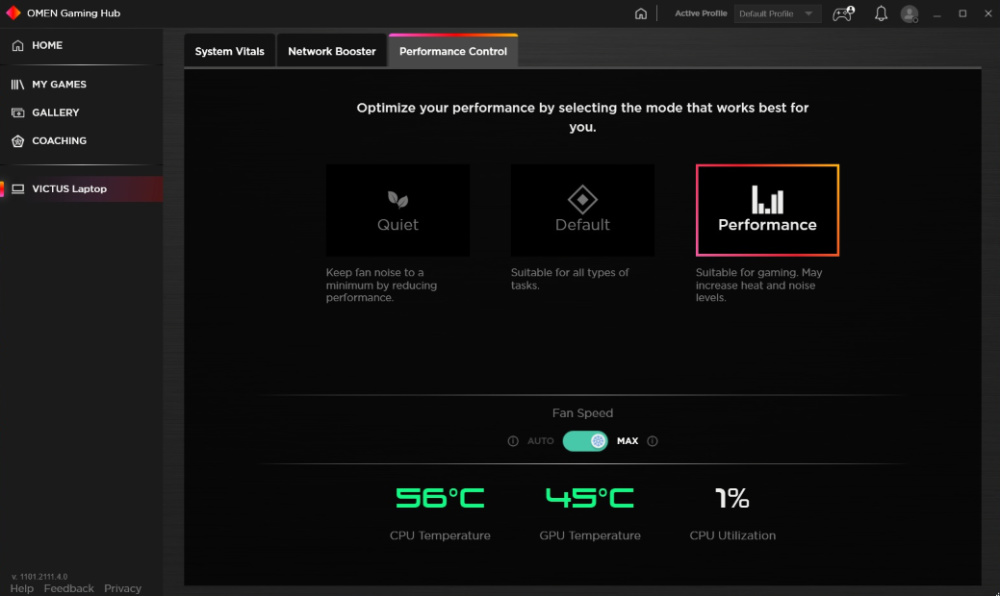 There’s also the Performance Control to let you pick the mode that suits your current task: Quiet, Default, and Performance. You can also put fan speed in Auto or Max.

Powering the Victus 16 (16-e0094AX) is an AMD Ryzen 7 5800H CPU, NVIDIA GeForce RTX 3050 4GB GPU, 16GB DDR4 RAM, and 1TB SSD. The configuration is similar to the Lenovo Legion 5 we reviewed in October except for the GPU part, so we expect the Victus 16 to get lower sores. Check out the benchmarks below.

Even though it has a lesser-powered GPU, the Victus 16 was still able to run games in their highest settings, but don’t expect very high frame rates in demanding titles. 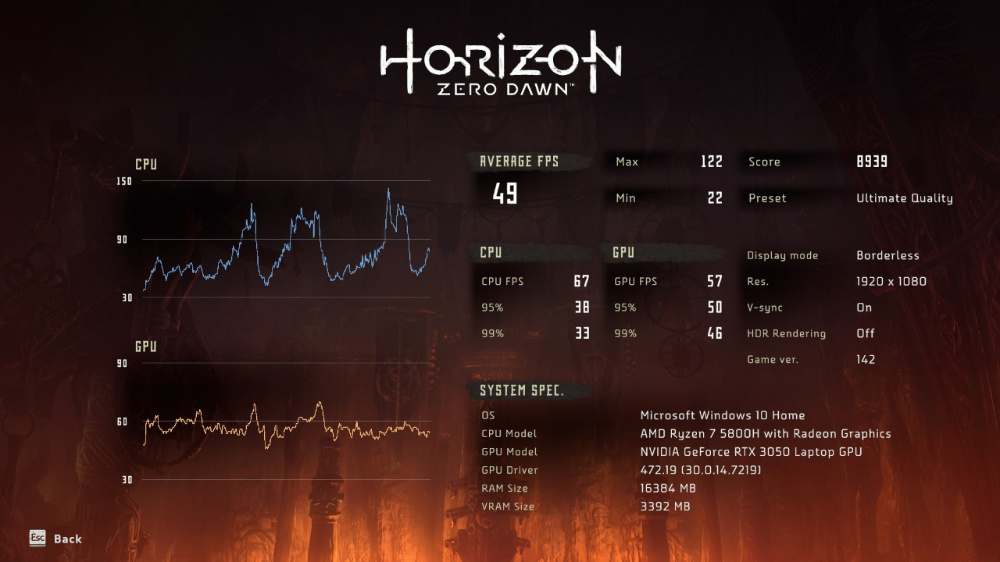 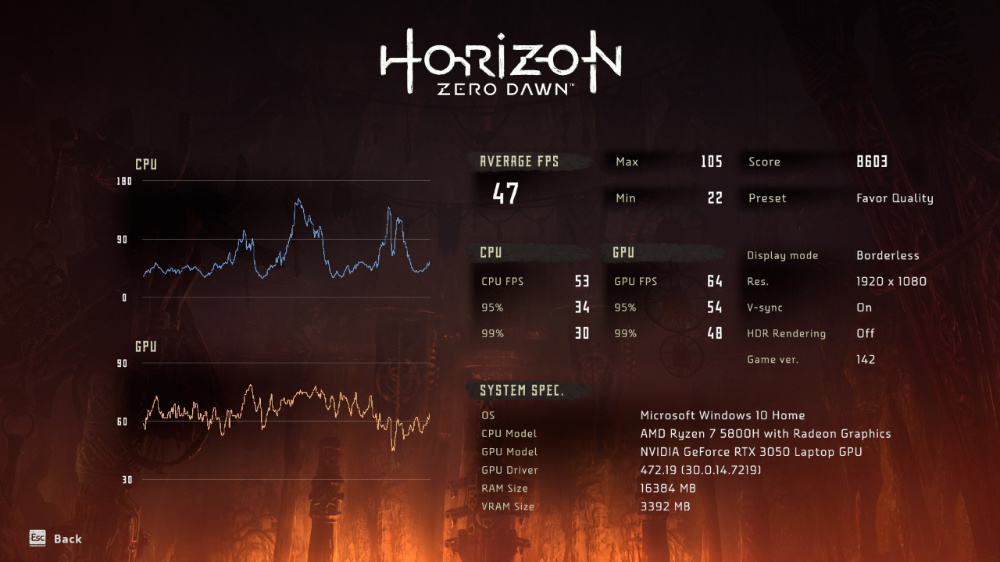 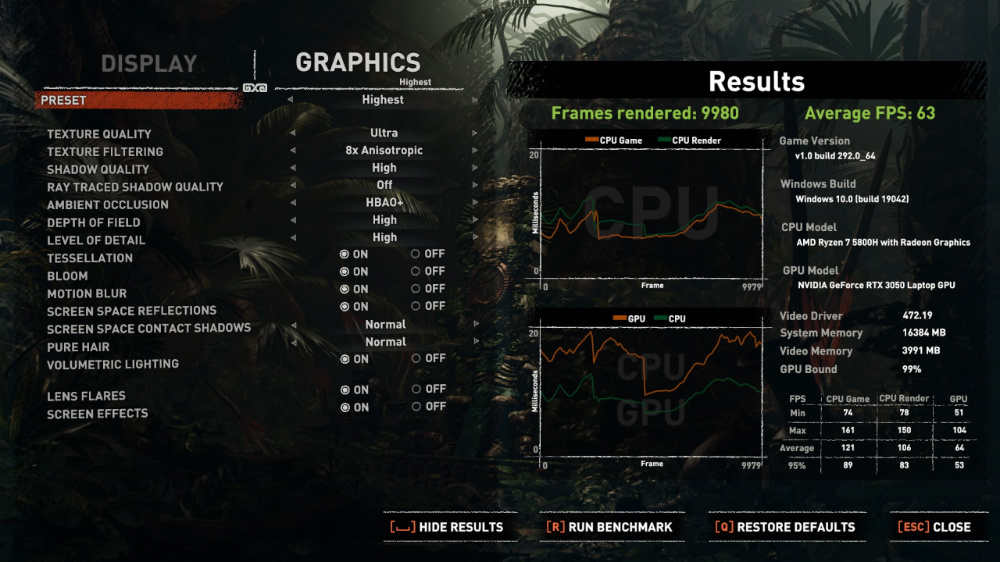 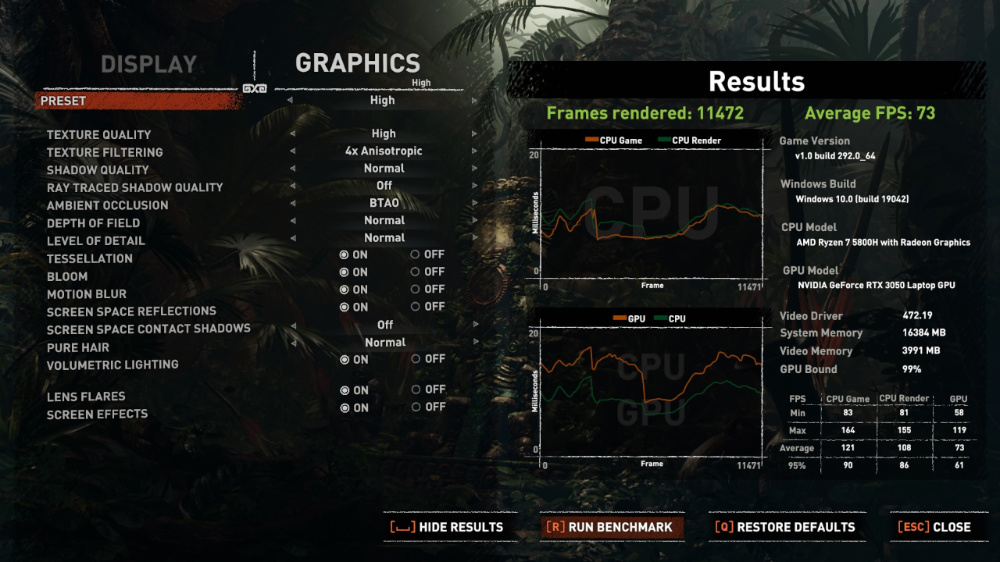 In Middle Earth: Shadow of Mordor, we got 65 FPS in Ultra and 70 FPS in Very High. 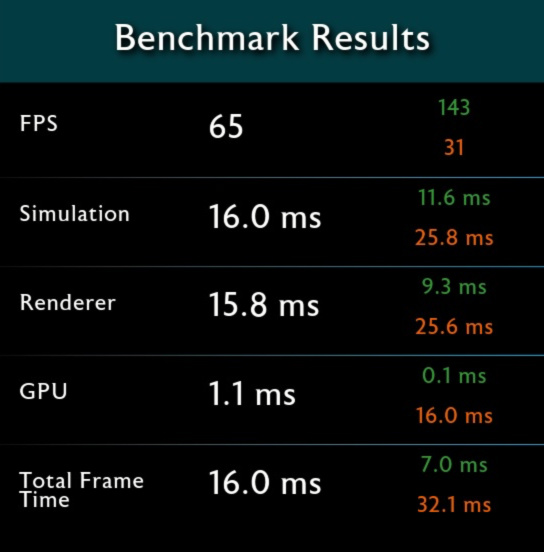 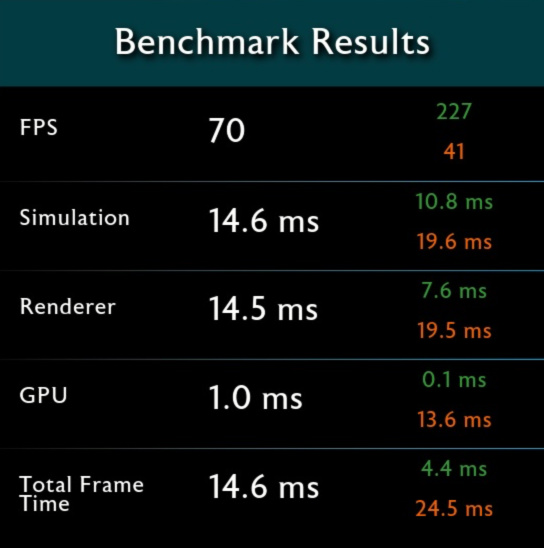 For Final Fantasy XV Benchmarks, we got a score of 5,027 in High Quality and 7,052 in Standard Quality. 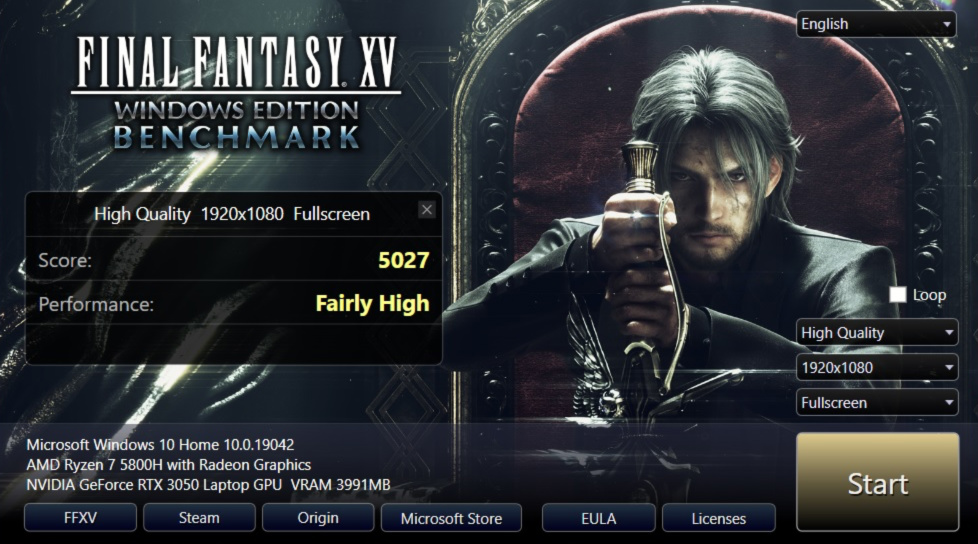 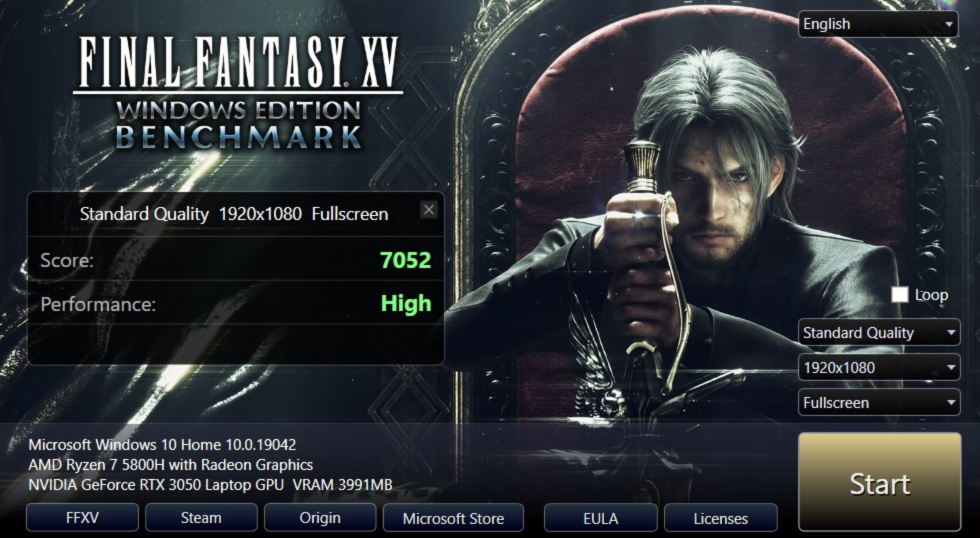 For Final Fantasy XIV Online: Endwalker, we got a score of 13,000 in maximum settings. 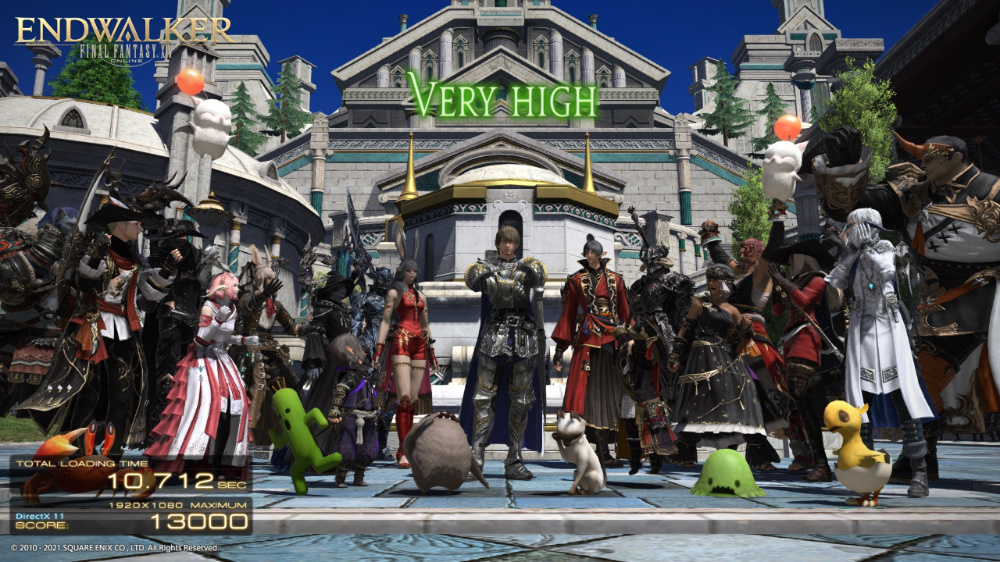 Thermals are okay and can go as low as 40-degrees C on standby. While playing games or doing benchmarks, the CPU can reach up to 80-degrees C, while the GPU can go up to 62-degrees C. Most of the heat is felt in the top and center parts of the keyboard, but it’s good since the WASD keys part and palm rest remain relatively cool.

Aside from the generous ports mentioned earlier, the Victus 16 also supports WiFi 6 and Bluetooth 5.2. For the battery, it has a 4-cell 70Wh battery. HP claims a video playback of up to 11 hours and 30 minutes, but based on our video loop test, we got 6 hours of playback in better battery mode, which is decent battery life, but not impressive. Charging is done via the 200W charging brick.

The Victus 16 (16-e0094AX) is a good-looking gaming laptop with very capable specs at a more attainable price of PHP 75,990. There’s also a 16-e0216AX model with 512GB SSD and RTX 3050 Ti for PHP 79,990. It’s more than enough if used for productivity purposes or casual entertainment, but in gaming, you’ll have to lower some of the graphics presets to get better frame rates. If you’re not a heavy gamer, this laptop will serve you well.