After a period of beta testing, the software giant started seeding the update for an improved version of the Xbox 360 Dashboard. This update is said to bring in new features to the gaming console’s UI for a more immersive experience. 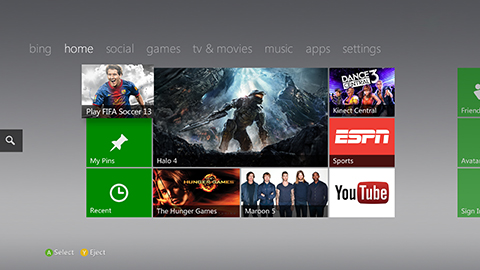 Some of the new things that this update brings to the table besides the new Dashboard layout are Internet Explorer integration and Film ratings and recommendations courtesy of Rotten Tomatoes. The company also promised to bring Xbox SmartGlass functionality to the console, but itâ€™ll be a separate update which will come after the Windows 8 release. Here’s a sneak preview of the Xbox SmartGlass in action.

Microsoft also improved the search feature of the console by adding Genre search in the mix. In addition, they also expanded the voice search capability of Kinect by adding 9 new countries under its belt. Unfortunately, Philippines is not included on the list.

The update is said to be rolled out to all supported regions gradually starting next week. The company looks to reach three million consoles worldwide before the end of that week and will continue seeding the update to other users in the next succeeding weeks. For more information about the said update, you can head on over to Major Nelson’s site here.