Microsoft introduced the Surface Pro to make a compelling case for Windows 8 and for the longest time, Windows was left behind the growing market of Android and iOS tablets. Microsoft’s counter is the Surface Pro. Check out the full review below if they hit the target right in the head.

The Redmond-based giant introduced their own tablet sometime in June of 2012 although the final product was only released after October, when Windows 8 was also shipped. Two variants were released — Surface RT (which we reviewed here earlier) and the Surface Pro, which we have here now. 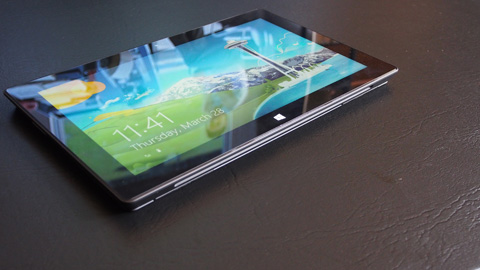 The Surface Pro is a 10.6-inch tablet that is powered by Windows 8. In all intents and purposes, it is a full-fledged laptop or ultrabook when you attach the soft cover that acts as the physical keyboard. Since it is powered by a 64-bit Windows 8 operating system, you can do basically anything that you want with it in the same way you would use a regular laptop or PC.

The device is has that industrial design and monolithic look to it, having constructed using a solid yet light metal alloy. The dark, chrome shade is cold but not dull. The matte finish feels smooth and nice. The corners are sharp and the edges are cut unevenly in a wedge or trapezoidal shape. The physical buttons are placed at the sides — power button at the top; volume control at the left along with headphone jack; a full-sized USB port and microSD card reader on the right and the magnetic latch at the bottom.

At the back is the kickstand which allows the tablet to gain free-standing position at about 45-degrees. This works best when you’re doing some productive work with the device, along with the keyboard. 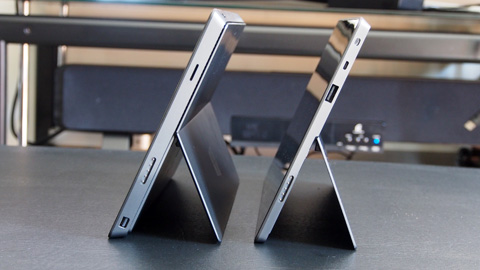 There are two types of keyboard cover but the one that came with this review unit is the soft cover, the same one we had with the Surface RT. It’s very thin but manages to be usable after some time. There’s no tactile feedback to speak of but you’re get used to it and be a quick typist in no time. It does help that there’s a subtle clicking sound when you press a button so you get that simulation of a keyboard feedback. 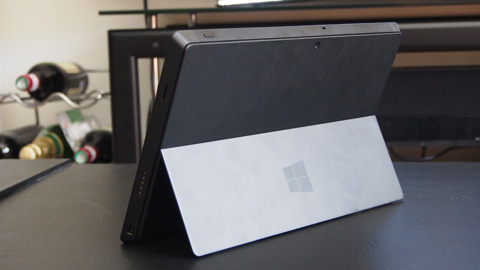 The tablet feels a bit chunky though, even a few millimeters thicker than the Surface RT. This is probably due to the Intel chipset and the fact that it needs some sort of air ventilation at the back side.

The Surface Pro is probably one of the very few tablets to get a full HD display. When compared to ultrabooks, it shares the same full HD feature as the Zenbook Prime and Aspire S7 but since the Surface Pro is just 10.6 inches, the latter gets the benefit of a slightly higher pixel density. 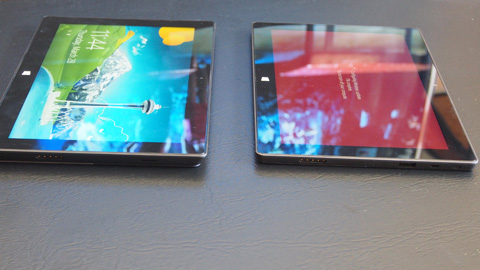 The glass display looks clear and crisp but one of the drawbacks of a full HD resolution is that the Windows Desktop looks really small. In contrast, the Metro UI looks better at this resolution. Viewing angles is pretty wide and amount of brightness is just enough.

What frustrates us often is the marks left by the keyboard on the display every time you close it. We suggest bringing a micro-fiber clothe all the time to wipe the smudge marks away. 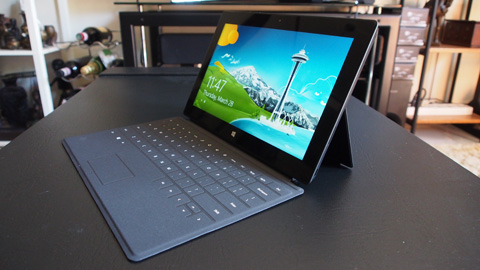 This variant of the Surface Pro is powered by an Intel Core i5 dual-core processor running at 1.9GHz. Intel’s Turbo Boost 2.0 technology allows the cores to power up to 2.6GHz when needed. The system also comes with 4GB of DDR3 RAM which is just enough for a Windows 8 operating system. The 128GB built-in SSD is good enough for storage — it’s the bare minimum we can tolerate when compared to ultrabooks but it’s more than enough when we’re talking from the tablet side.

The tablet is relatively powerful compared to Android or iOS tablets and comparable to most high-end ultrabooks in the market.

The CPU has a very nice score of 6.9 on Windows Experience Index and an 8.1 on the SSD storage (this is probably the highest WEI sub-score we’ve ever tested on any laptop or Windows tablet). The lowest sub-score of 5.6 is taken from the Graphics which is still very decent.

It is interesting to note that the Surface Pro comes with a Wacom pen (absent in the Surface RT). Wacom’s technology is already proven and tested so there’s no question about sensitivity, accuracy and responsiveness on that end.

Not a lot of people might use it though since it has limited use, mostly for drawing and sketching. However, if you are the type of person who prefers a stylus like Wacom, then this is going to impress you. Was trying out the Wacom with MS Paint and it was very smooth — so smooth, I was able to scribble effortlessly and write my signature better than I would have in a pen and paper.

When you consider the Surface Pro as a tablet the same way as you would an Android or iOS tablet, you will be sorely disappointed with the battery life. We could barely last 4.5 hours playing a full HD 1080p video in a loop at 50% brightness and 50% audio volume. As an ultrabook, this battery life is very typical and matches almost the same as with the Zenbook Prim and the Aspire S7. The 1080p display took most of the power consumption in video playback. For other less extraneous productivity like MS Word or PowerPoint, we saw a bit better battery life but not by much either.

The Surface Pro is an interesting hybrid of a tablet and laptop. Unlike its little sibling (Surface RT), which is considered more of a tablet, the Surface Pro has more affinity to the ultrabook.

From that perspective, you would understand the unique value proposition — a fully functional, high-power ultrabook in a tablet form factor. This isn’t actually new since Microsot has been working with the likes of HP more than a decade ago to create Windows-based laptop-tablet hybrids. It was very bulky then, under-powered, has low resolution and mediocre stylus performance. This time, we think, they’ve finally realized that long-forgotten ambition.

Where else can you find a portable yet powerful tablet that can do Premiere and Photoshop easily ans still play Starcraft 2 at very decent frame rates?

The Microsoft Surface Pro is available over at Galleon.ph for Php51,349 {see listing here}. It’s priced in the same range as most other ultrabooks out there.

What we did not like:
* A bit chinky and heavy for a tablet
* Lackluster battery life

P.S. Check out our giveaway here.