7 Tips to Make Your Old Android Lean and Mean Again

7 Tips to Make Your Old Android Lean and Mean Again 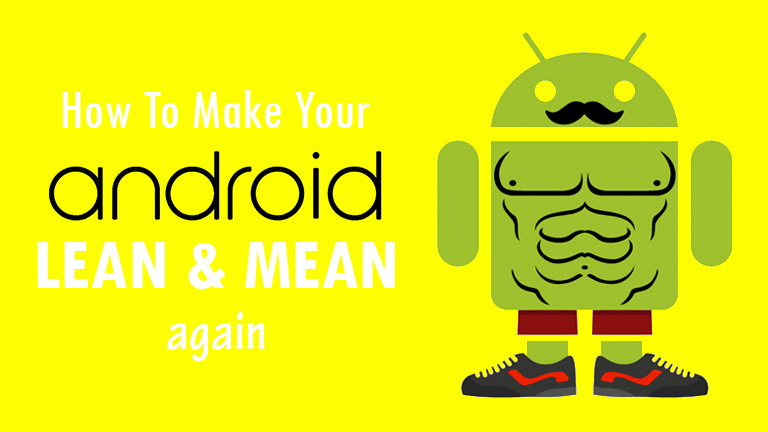 Every year, a lot of new Android devices are launched by multiple manufacturers. Some have great improvements, while others are just new designs with the same internals with what you already have. So, if you’re planning to throw away your old Android and buy a new one because it’s already a generation older, hold on! You could save thousands of pesos if you’ll try to make your old smartphone or tablet new again with these seven tips.

1. Start again with a clean slate

Like your old PC, your smartphone will greatly benefit from a good ol’ reformatting. With every mobile device, there is a “Factory Reset” option tucked away inside the settings menu. Click it and read all the warnings. Doing a factory reset will erase every content on your device, from installed apps to photos and videos. Thus, allowing your Android to start with a clean slate. The downside though is that even installed updates are removed, so expect a long process of reinstalling the latest update after.

If you don’t wish to do a reset, there are a lot of memory management and cleaning software on the Play Store. These are applications that automatically monitor your memory consumption (RAM) and free it up whenever needed. Some of these also offers more than that. They range from uninstalling of useless apps to storage analysis, which you’ll need in the next tips. If you’re a hardcore user, you may also root your device to get rid of hard-to-remove bloatware.

3. Only keep apps you use frequently

Now that we have an app monitoring the available memory or RAM, your internal storage could use some breathing space. Do you still use that application you’ve installed months ago? No? Well then, uninstall. Let go of the things that burden your smartphone’s performance. They are apps that consumes memory even when not in use. Balance things out by weighing which app you frequently use and say goodbye to those you haven’t for quite sometime. You’ll not only benefit from having more free space for future apps, but also from clutter from nuisance icons on your list.

4. Organize your files and folders

Speaking of clutter, let’s also clean up the files and folders saved on your smartphone. Being an Android device, you can access your smartphone’s folders through any file manager app or by connecting it to your PC. Put all the music files under your music folder, all the videos under your video or movie folder, and so on. How about your thousand photos? Back it up. Save it through any cloud service provider (Google Photos gives unlimited storage), or transfer it to your PC’s hard drive. Though, you might want to keep a copy of friends and pet photos for times when you wish to reminisce them.

If your smartphone has a microSD card slot, we strongly suggest to change the default storage for photos and videos to the microSD. And, allot your internal memory for apps. This way, your apps will respond faster that it normally would if they were moved to the microSD. And if you are planning to buy a new microSD card, purchase the Class 10 variants to avoid any slow down during usage.

One of the advantages of having an Android device is that you can install a new launcher. Not only it will give your device a new look and better customization options, but it may also make your device run faster compared to the old stock launcher. We recommend Google Now Launcher, Apex Launcher, and Nova Launcher.

If your device is lucky enough to get Android firmware upgrades and updates, make sure to download and install them. Firmware upgrades and updates remove bugs and brings performance improvements. However, for the devices that are left behind, you can opt to root your device and flash a custom ROM. This option is not for beginners though so make sure you carefully study the process or ask for help.

We’ve managed to clean or upgrade your smartphone’s software, now what about the hardware? Those dents and scratches will be an eye-sore when they become noticeable. For the finishing touch, you can make your smartphone look lean and mean again by giving it a new case. It could be any add-on protective casing or swappable covers. A new screen-protector will also do the trick.

It’s as good as new

With a fresh software, organized files and sparkling new look, you’re smartphone is now ready for another long adventure with you. Also make it a habit to clean your device. A microfiber cloth can help you wipe off any smudge on your “new” smartphone.

Bonus tip: Merge your duplicate contacts. Your contacts app could be plague by identical entries. It might be the reason why it is hard to identify which number is the active one.