An iPhone 7 Plus catches fire, Apple already ‘looking into’ it

The fiasco that greatly affected Samsung is now haunting Apple but this is not the first time it happened. 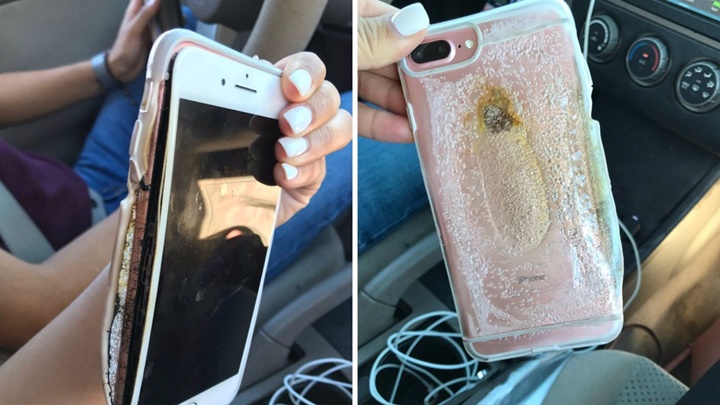 A viral video online shows a rose gold iPhone 7 Plus slowly melting a plastic case as the unit itself is catching on fire.

So my IPhone 7 plus blew up this morning ???? was not even using it, literally no explanation for this pic.twitter.com/sQ8CJt4Y69

Brianna Olivas, the owner of the faulty device, says the phone exploded and began smoking even though it’s not charging on a Wednesday morning. According to her, the accident began the day before when her iPhone 7 Plus wouldn’t turn on. She then took the phone to an Apple Store to ran diagnostics but she was told that everything’s fine. The phone appeared to be working normally again until the next morning.

“The next morning I was asleep with my phone charging next to my head, my boyfriend grabbed the phone and put it on the dresser,” she said via a direct message on Twitter. “He went the the [sic] restroom … and from the corner of his eye he saw my phone steaming and [heard] a squealing noise. By the time he got over to the phone it had already caught fire, he quickly grabbed the phone and threw it in the restroom … as soon as he threw it in the restroom is [sic] blew up and more smoke started coming out of the phone.”

Good news is that her phone was already replaced and Apple representatives are already looking into the matter. Let’s hope this is just an isolated case and not another series of exploding phones.

the very same thing happened to my macbook pro mid-2011 edition. I got it mid 2011 but it only misbehaved last month. I was just streaming videos online (as usual) when a “squealing noise was heard and then a smoke came out from the vent!” It laptop wasn’t even charged. I brought the concern to an apple telephone support. No help really… later brought it to icenter in davao, the isupport only run few tests and said there was nothing wrong with it. further added, if it is indeed damaged, because it’s a model no longer supported, there’s nothing more they can do. crap! it wasn’t even opened to see the hardware.