ARM is looking to shake up the stage of mobile performance as they unveil their latest CPU and GPU creation, the Cortex-A76 and Mali-G76.

The Cortex-A76 uses the same v8.2 architecture as the previous generation Cortex-A75 (10nm), but with better microarchitecture (7nm) for improved performance. The CPU now also uses a second generation DynamIQ big.LITTLE technology. ARM is stating a 35% increase in performance, 40% increase in power efficiency and, and 4x the ML (machine learning). 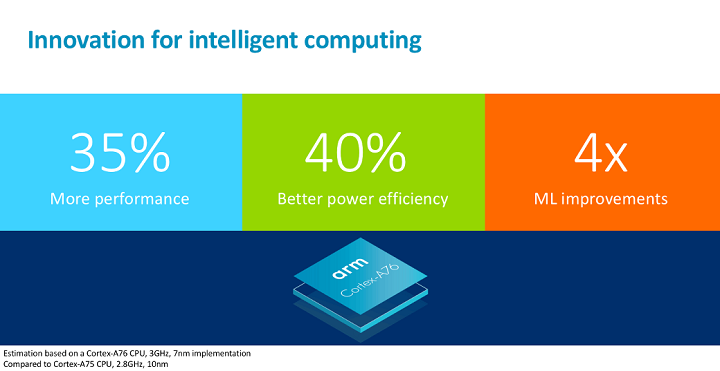 The new CPU is actually also aimed at mobile PCs as ARM is promising laptop-class performance and mobile power efficiency. This means that Cortex-A76 equipped laptops will have enough power to perform their needed tasks while having mobile-like battery life. Then we have the new Bifrost-based GPU, the Mali-G76. Like the Cortex-A76 It’s now on a 7nm microarchitecture. ARM is promising a 30% improvement in performance and battery efficiency along with 2.7x more machine learning compared to the previous generation Mali-G72.

Here are its key features: