Priced and launched together with the Zenfone 4 and Zenfone 5, The ASUS Zenfone 6 is the biggest and the highest-end model in the Zenfone family. Read on as we find out what this phablet  has in store for us in this full review.

We have a video version of this review that visually shows more about the Zenfone 6:

Note: If you’ve read our first impressions on this device, you may skip Design and Construction and jump to Display.

The Zenfone 6 boasts a 6-inch IPS display that’s reinforced with the tough Corning Gorilla Glass 3. It has a large screen real estate which should make watching movies and playing games a joy. Bezels on the sides are thin but the top and bottom have a bit more extra space in them. 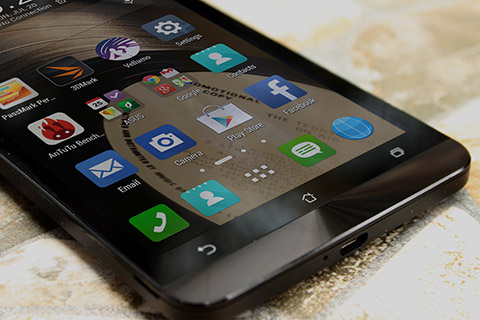 The upper bezel is where the sensors, speaker grille for calls, and front-facing camera are all situated, while the capacitive Back, Home, and Active Window buttons are on the bottom. ASUS also designed it to have a circular pattern similar to what we saw with the company’s Zenbook that positively adds to the overall aesthetics of the device. There are only two physical buttons on the Zenfone 6 and they are present on the right side of the handset. Here, we have the Power/Lock button and the volume rocker.  Up top and on the left side is the 3.5 audio jack and down below in the middle is its microUSB port.

Turning it over, you’ll find its 13MP camera right smack in the middle with a single LED flash just below it. The entire back is made of plastic with matte finish and is removable to reveal the dual-SIM and microSD slots. The company’s decision to go with an all-plastic cover is understandable to keep costs low, but they still managed to make it feel and look classy so that’s a plus in our book.

Considering it only uses a 720p display and not Full HD, the Zenfone 6’s screen is impressively clear. Whites are sufficiently bright and its contrast gives off good detail throughout our entire time with it. ZenUI’s new and colorful icons also make browsing visually appealing and more engaging. 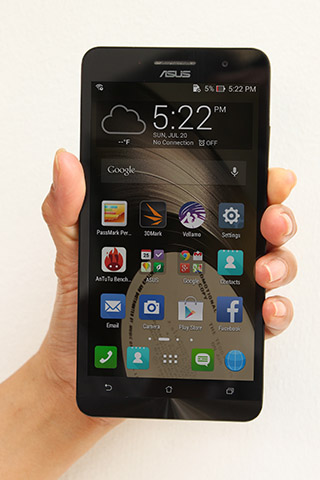 It has good viewing angles and though glares are present when you bring it outdoors, it is easily remedied by increasing the brightness of the phone.

The implementation of the company’s proprietary ZenUI, as mentioned earlier, comes with a refreshed look and simpler icons. Some of the thing that caught our favor were the simplified tiles and the Quick settings’ rounded icons that go easy on the eyes. 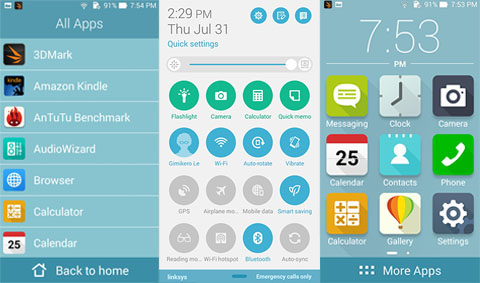 The Zenfone 6 comes with pre-installed apps: To state a few there’s Omlet which is a messaging tool, MyASUS that’s basically all about the company from service hotline to news updates, and What’s Next that acts as a reminder of your upcoming events and schedules.

It runs on Android 4.3 out of the box, but is upgradable to 4.4 KitKat. We’ve tried downloading a handful of apps and there were no issues that came up.

Camera-wise, it sports a 13-megapixel rear camera with BSI sensor and a single LED flash for low light conditions. The company has embedded a lot of post-processing technologies deep into its system to improve captured photos (even videos). In Auto mode, we noticed that default color settings give off a desaturated and bland output. Although this may be the case, we’re fans of its other modes like HDR, Depth of Field, and Low Light. Low Light is a recommendable tool for shooting in dimly-lit places as it can brighten up the image and show hard-to-capture details due to lack of light. The trade-off is an image reduced to 3MP – which isn’t that bad compared to the achieved shot. 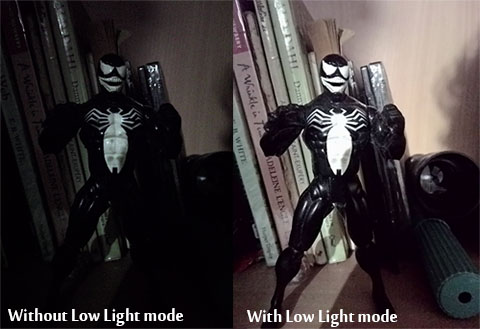 In addition, it also has Remote Link app that lets users control their PC using the phablet thru Bluetooth connection. The device acts as a mouse pointer and clicker that can become useful for presentations. The back cover has dotted holes where the sound comes out, but if we pop it open we see that the speaker is only one-forth the size of the panel and only spreads the sound to the openings. It’s sufficiently loud but having a more powerful speaker wouldn’t hurt. It’s advisable to plug in your headphones for better enjoyment.

The Zenfone 6 runs on a 1.6GHz Intel Atom Z2560 dual-core processor with HyperThreading Technology. This technique is unique to Intel and is like their “secret recipe” to improve performing multiple tasks at once. 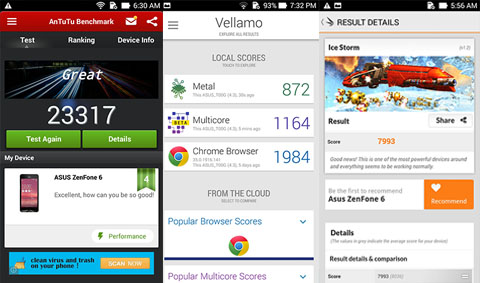 In general, we had a smooth-sailing affair with transitions and switching of tasks, but there were times when it came across hiccups when closing and exiting apps. The company’s ZenUI, in addition to a refreshing change in icons, is also there to give the phone an added boost in performance.

This works well with the entirety of the phone but the camera’s UI seems to lag for a bit after taking photos with special effects on. This is quite understandable as it applies the needed filters, though opening the images while on the Camera app has about 1 – 1 ½ seconds of lag time.

Using it for calls was no hassle at all. The voice from the other line was received well, while our speech had no problems being understood. Connectivity-wise, it has Wi-Fi and 3G that works well and has good signal reception. 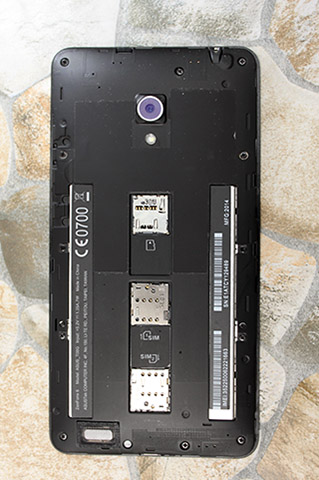 Its non-removable battery is impressive. With Ultra-saving Mode off, we looped a video and it lasted 7 ½ hours with brightness and volume on maximum while Wi-Fi is on. Turning Ultra-saving Mode on, it clocked at almost 9 hours of continuous playback thanks to its 3300mAh battery.

During our entire time with the Zenfone 6, it proved to be a joy to have around. The camera’s UI isn’t blazing fast but you can do so many things with its features and effects. Its spacious 6-inch 720p display also makes it enjoyable to watch videos and play games. ZenUI’s new look is definitely refreshing and makes navigation generally a breeze. 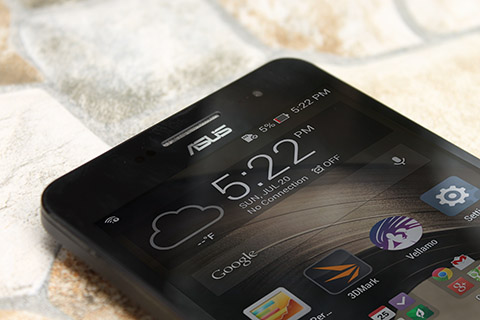 For Php11,995, you get a well-built device, beefy internals, and impressive display best for multimedia usage.

What we didn’t like:
*Camera app is laggy
*Bland photos on Default mode
*Capacitive buttons have no back light
*Small speakers