ASUS Zenfone 9 vs Zenfone 8: Worth the upgrade?

by Louie Diangson · 6 days ago

ASUS recently launched its latest flagship smartphone with a compact body, the Zenfone 9. As the name suggests, it’s the successor to the Zenfone 8 that launched last year. So, if you’re asking what’s different between the two and if it’s worth upgrading to if you’re coming from the older model, check out our specs comparison below. 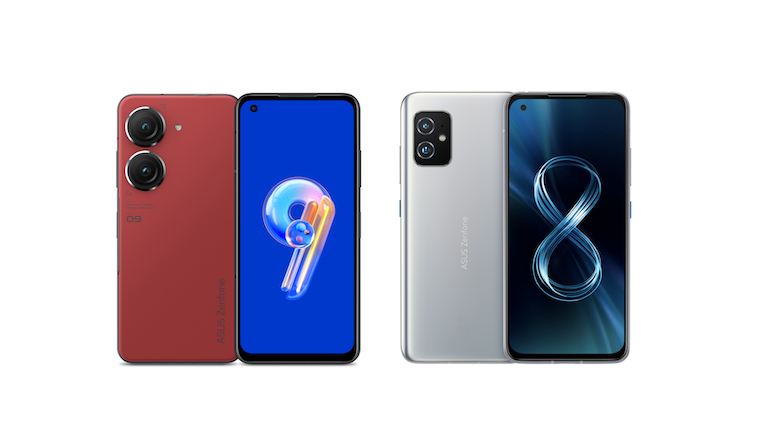 One of the best selling points of the Zenfone 8 is its compact size which can be attributed to the small sub-6-inch screen. ASUS retained that benefit in the Zenfone 9, and in some dimensions, made it even more compact. It’s shorter at 146.5 mm (vs 148mm) and narrower at 68.1 mm (vs 68.5 mm). It’s chunkier, though, at 9.1 mm (vs 8.9 mm), but that’s to accommodate the larger battery capacity.

On the front, the two devices look identical but flip it on its back and you’ll see their differences in design. The Zenfone 9 has larger cameras and a more futuristic design. It also comes in four colors compared to the Zenfone 8’s two options. The two devices still have Gorilla Glass Victus and IP68 dust and water resistance.

ASUS retained the screen on both devices. We’re talking about a 5.9-inch screen with a Super AMOLED panel, Full HD+ resolution, and 120Hz refresh rate, which means we can expect the same quality.

The Zenfone 9 gets a significant upgrade in terms of chipset as it has the newer Qualcomm Snapdragon 8+ Gen1, versus the Snapdragon 888 5G found on the Zenfone 8. The processor is clocked higher at 3.19GHz (vs 2.84GHz), and has a more powerful Adreno 730 GPU (vs Adreno 660). So, if you’re expecting a performance bump, you’ll certainly get that on the Zenfone 9.

The larger camera module on the Zenfone 9 is there for a reason, and that’s because ASUS gave it upgraded cameras. The main camera has a lower 50MP resolution compared to the Zenfone 8’s 64MP, but it uses a newer Sony IMX766 sensor (vs Sony IMX686), so we can expect better performance and quality. It also uses a gimbal-based OIS so it can shoot smoother videos and photos with less blur in low-light scenarios.

For the secondary camera, both have 12MP ultra-wide shooters, and for selfies, both also have 12MP cameras.

In terms of connectivity, the two are almost identical. They both have a dual-SIM with 5G, WiFi 6e, Bluetooth 5.2, NFC, GNSS, and USB-C. Both have fingerprint scanners but the one on the Zenfone 9 is now placed on the side instead of under the display.

Both have stereo speakers and 3.5mm audio jacks. For software, they both run ZenUI but the Zenfone 9 has Android 12 out of the box, while the Zenfone 8 has to be upgraded from Android 11.

If you dig the new design and need better chipset performance, improved main camera, and bigger battery capacity, the Zenfone 9 is a nice upgrade but not necessary. It’s yet to launch in the Philippines so we don’t know the price yet, but if they can keep it below PHP 40K, it will be an enticing offer.

Some inaccuracies in the post. The zenfone 8 model also had a 16GB RAM version :)