BlackBerry explains why they made a square smartphone

BlackBerry explains why they made a square smartphone

BlackBerry recently announced a new smartphone with an unconventional shape – the BlackBerry Passport. It takes on a 1440 x 1440 display resolution giving it a square build combined with its trademark physical keyboard. The phone received mixed responses afterwards which made the company release an explanation regarding this odd form factor. 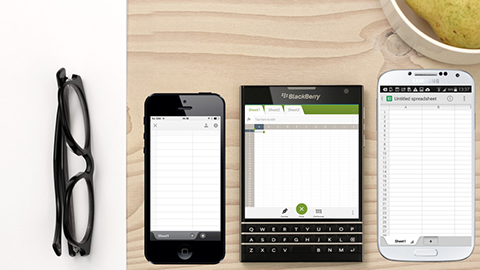 Samples were previously given as to where the Passport would prove useful. Now BlackBerry adds more reasons why they went with this design. One of the main purposes is to maximize reading. BlackBerry noted that the screen is 4.5 inches which is twice as wide as the screen of the iPhone 5S.

“Based on academic typology, the optimal number of characters on a line in a book is 66 characters (current rectangular smartphones show approx. 40 characters and BlackBerry will show 60 characters,” the statement said. “BlackBerry Passport offers its size and aspect ratio to accommodate these characters.”

One thing people are complaining about is its lack of a full keyboard as other important keys like Shift and Caps were omitted. The company defended the Passport and said that it helps writing efficiency and speed since “when you are looking to type stories or notes, your virtual keyboard doesn’t cover most of your screen.”

Obviously, the Passport isn’t aimed at a wide range of consumers. It has its specific target market and that’s what’s BlackBerry is most likely targeting to find its own new niche. If you were in a field of work that would make the Passport useful, would you find yourself getting one?