Due to the metro-wide flooding in the last couple of days, the official launch and release of the BlackBerry Q5 was moved from last night to August 24. In any case, the handset should be available in stores by then for only Php18,690.

The handset will also be available on Smart, Sun and Globe . The telcos will announce their own postpaid offerings for the Q5 soon. 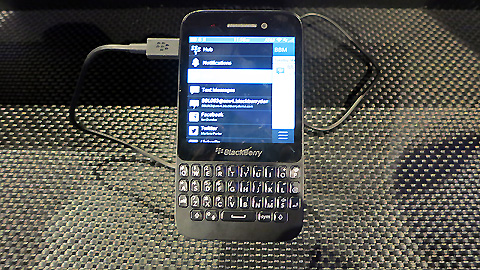 The BB Q5 is the more affordable sibling of the BlackBerry Q10 with almost the same hardware features, including NFC . It even has a slightly higher battery capacity than the Q10.

The Blackberry Q5 was announced in Orlando, Florida back in May during the global BlackBerry Live event which we attended. You can read more of our initial impressions of the Q5 here.

The Q5 will be available in stores this Friday with a suggested retail price of Php18,690. BlackBerry is also running a promo where you can swap your old BB for a Php2,000 discount on any of the new BB devices.

Updated: Representatives from BlackBerry Philippines clarifies that the model they are releasing thru official distributors in the Philippines will only be 3G/HSPA+ variant and not the LTE variant. They would not comment on what variants the carriers will be releasing (so it’s possible Globe will be shipping in their own units with LTE in them, that’s outside of BlackBerry PH’s coverage).