The BlackBerry Q5 is the 3rd handset running the new BB 10 OS by the Canadian company. It is a strong attempt at getting the attention of the budget-conscious and the emerging markets.

The BlackBerry Q5 is almost similar to the BB Q10 in form factor but will be more affordable than the $599 price tag of the Q10. Nevertheless, BlackBerry made sure that the performance and the experience will still be almost the same. The hardware specification was well thought-out and balanced.

According to BlackBerry executives, the Q5 uses the same chip as the BB Z10. It’s a Qualcomm MSM8960 Snapdragon S4 processor but a little underclocked to just 1.2GHz instead of the 1.5GHz. 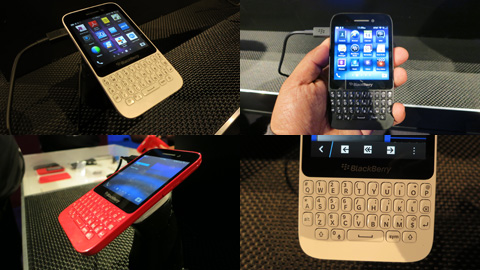 The small IPS LCD is complemented by the full-qwerty keypad, the dual-core processor is paired with a generous 2GB of RAM, support for NFC and LTE is most welcome, and a large 2180mAh battery rivals even most other flagship phones.

The design of the Q5 is also more refreshing and obviously caters to a younger user base, compared to the more industrial finish of the Q10. BlackBerry also added color options, just to add stress that perception (white, black, red and pink).

Here’s a quick hands-on video we took of the BB Q5.

The body is a little chunkier (10.8mm) compared to the Q10 and has a unibody design with a non-removable battery.

The BlackBerry Q5 will be available in the Philippines some time in July. while there’s no indicated retail price yet, we’re hoping it will be between Php15k to Php20k when it reaches our market. If it does, it will be one of the most affordable LTE handsets in the Philippines.