Google’s Android One initiative launched in the country last month and along with it are the first two Android One smartphones in the country. These phones carry affordable price tags and modest specs yet they will receive the latest Android OS version from Google as soon as it comes out. We’ve already reviewed the MyPhone Uno, this time we’re going to show you what the Cherry Mobile One has to offer. 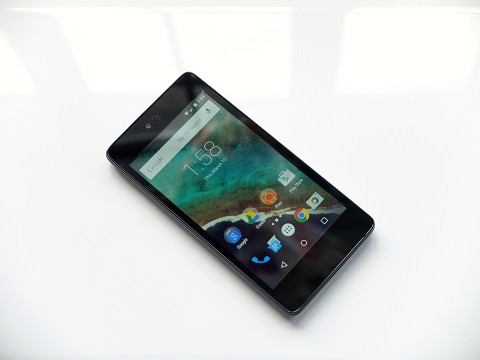 The Cherry Mobile One is a fairly small device. With most Android smartphones nowadays carrying a screen size of at least 5-inches, the One sits at 4.5-inches which is what most entry-level devices have now. 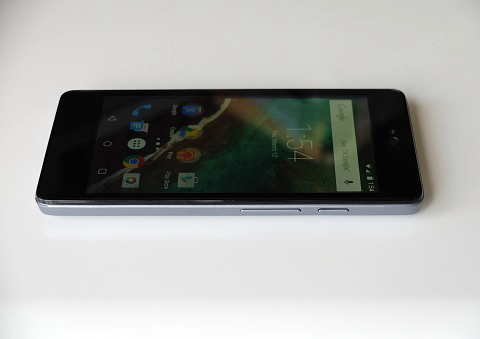 Aside from the display, also found on the front of the device is the circular earpiece, 2 megapixel front camera, notifications light, and light sensor. It features on-screen navigation buttons and not capacitive ones so it leaves a huge unused space below the screen. On the right side we have the power/lock button and volume controls while the left is devoid of anything. Found up top is the headset jack while down at the bottom is the microUSB port. Flip it on its back and you will see the 5 megapixel camera, LED flash, speaker, and the Cherry Mobile and Android One branding. 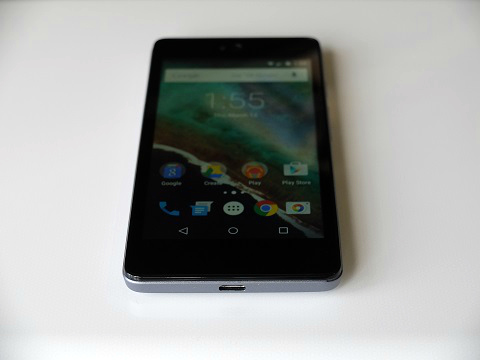 On hand, the Cherry Mobile One is easy to hold and put in the pockets due to its small size. The removable back is made of plastic with a grey metallic finish. It feels sturdy as well and does not exhibit any sign of creakiness or rattling. Design-wise, it’s a modest and simple-looking device. It doesn’t show much flair but its simplicity works to its advantage as it is not too distracting and compliments the software it is running inside. We’ll get to that part later on.

As mentioned earlier, the Cherry Mobile One sports a 4.5-inch IPS display with a resolution of 218ppi. Display size and resolution is okay and acceptable for most applications like browsing the Internet or use of apps. The use of an IPS panel is a good move but the gap between the glass and the screen limits the viewing angles and makes it prone to glare. Not to mention, the glass is a fingerprint magnet which really ruins the viewing experience. 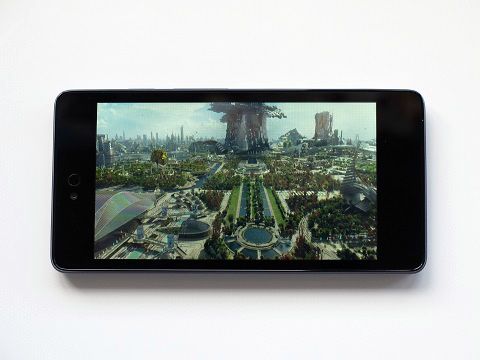 As a multimedia device, the One can play Full HD videos well. Colors are okay but not as punchy compared to more expensive phones. Glare can be a real problem though especially when viewing outdoors. On the bright side, the speaker is capable of producing loud and clear sounds. Just make sure that you put the speaker face up so that sounds won’t get muffled.

The One’s strength, or any Android One phone for that matter, is that it comes with stock Android Lollipop. The One already has Android 5.1 Lollipop out of the box so features like multiple SIM card support, device protection, and HD voice calling are already here. 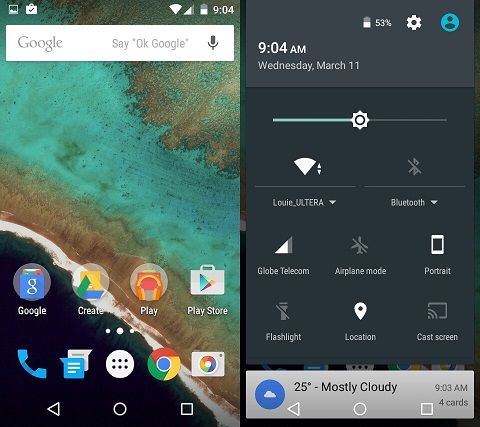 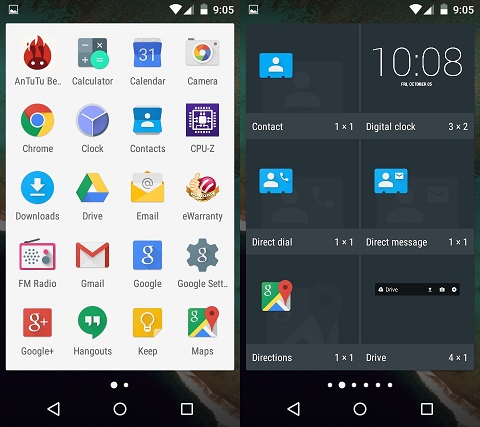 Bloatware are non-existent on an Android One device so you only get the essential Android goodies. In the case of the Cherry Mobile One it only has the Cherry Mobile eWarranty app preinstalled. Although the UI is left untouched, it still comes preloaded with Cherry Mobile wallpapers as well as ringtones. The One comes with 8GB of internal storage with 5.75GB left for the user. There’s support for a microSD card if you’re heavy on music or videos. As for USB OTG, unfortunately it is not supported.

The Cherry Mobile One isn’t exactly an imaging powerhouse. It only has a 5 megapixel rear shooter and a 2 megapixel front. Performance is disappointing as autofocus is slow and tends to overexpose images especially when shooting indoors that we are often forced to manually adjust exposure. Colors need improvement as well as most of our shots are washed-out. Take a look at some samples below:

As for video recording, the rear camera can record full HD videos at 30fps. Watch the sample clip below:

The Cherry Mobile One is powered by a 1.3GHz MediaTek MTK6582m quad-core CPU, Mali-400 MP GPU, and 1GB RAM. Not exactly high-end but it can manage basic tasks and play 3D games well. However, we noticed a certain delay when changing orientation from portrait to landscape and vice-versa. There were rare times when an app gets stuck in its current orientation for about five seconds before it changes which can be pretty annoying. 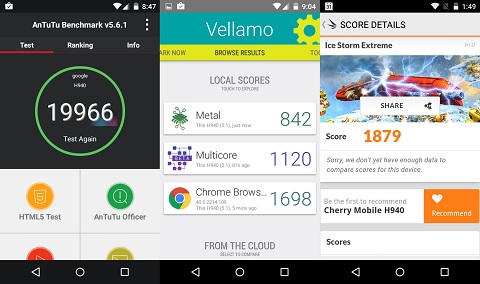 Below are the results of the benchmark tests:

Connectivity is good on the Cherry Mobile One. It supports two micro SIMs and connects and latches to our mobile networks and WiFi with ease. Call quality is good as well as we can be heard loud and clear. 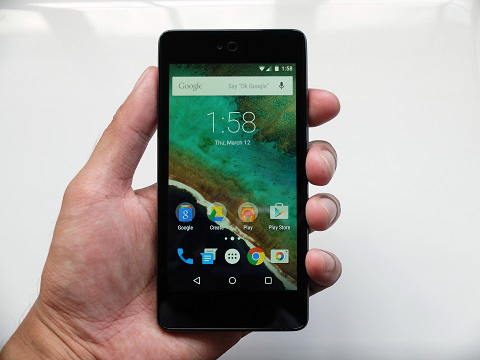 Many would scoff at the One’s measly 1,700mAh battery. That’s understandable since most phones are pushing above 2,000mAh, however, the One is capable of lasting the whole day if you’re just using it for basic connectivity like calls, texts, Internet surfing and social media. If you’re into gaming, just make sure to bring a power bank. 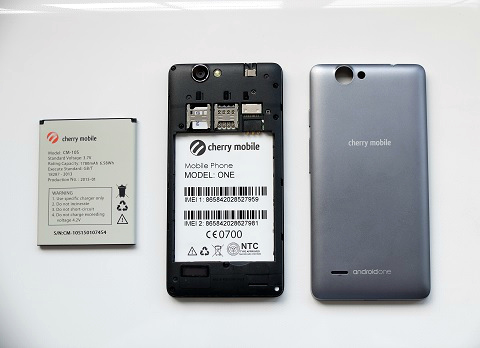 We ran our routine battery tests which involves putting it in Airplane mode and playing a Full HD video on loop using MXPlayer at 50% brightness with headphones plugged in at 50% volume, the result is 5 1/2 hours worth of playback which is below average.

To compare with the MyPhone Uno’s battery test result, we tested the One again using its parameters (720p video clip on loop using MXPlayer, Airplane Mode, screen brightness at 50%, volume at 0%) and the result is 7 hours and 18 minutes worth of playback.

If you look at the Cherry Mobile One’s hardware it’s not actually impressive. It has a small screen with low resolution, disappointing camera, average performance, and small battery. But the One is not built to impress. It’s built to be affordable yet capable at the same time. For Php3,999 people can now own a Google-tested device without breaking the bank and be one of the first to receive the latest Android flavors when it comes out. And for a budget-conscious market like ours that’s a very good thing. 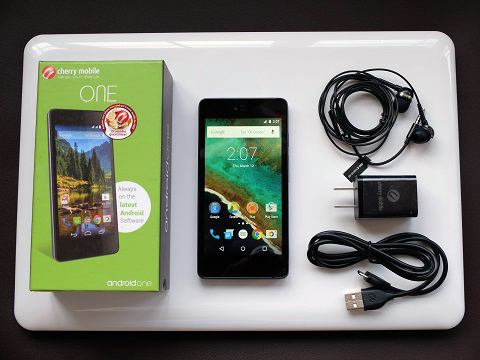 What we liked about it:
* Stock Android 5.1 out of the box
* Small and pocketable
* Simple yet sturdy design
* Guaranteed Android updates for two years
* Affordable price

What we didn’t like:
* Disappointing camera
* Below average battery life