Yesterday, we got a hands-on of LG’s latest superphone that packs a 5.9-inch Full HD display, a Snapdragon 800 CPU, and 3GB of RAM – the LG G Pro 2. Let’s pit it against another superphone that packs almost the same specs – the Samsung Galaxy Note 3. Let’s find out who looks better on paper by reading our comparison below. 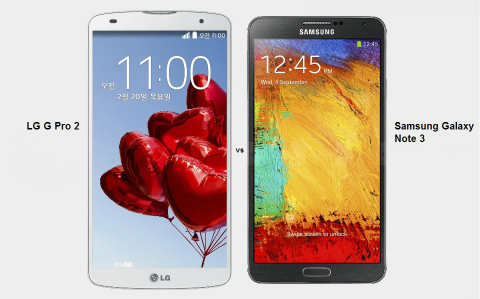 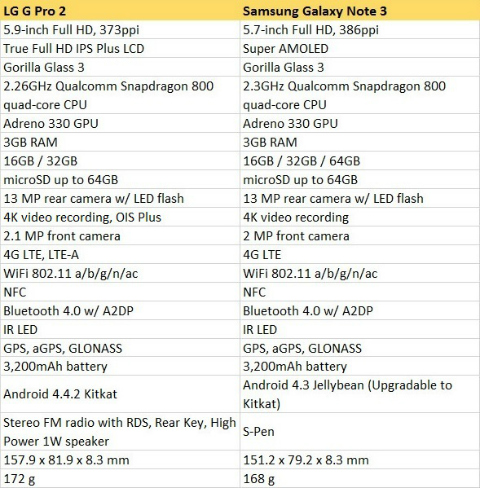 In terms of display, both have Full HD resolution displays mounted with Gorilla Glass 3. However, the LG G Pro 2 wins when it comes to size by having a slightly larger 5.9-inch screen compared to the Note 3’s 5.7-inch. On the other hand, the Note 3 wins in terms of pixel density at 386ppi compared to the G Pro 2’s 373ppi. Both feature different display panels as well – True Full HD IPS Plus LCD on the G Pro 2 and Super AMOLED on the Note 3.

Both devices sport the same Snapdragon 800 processors, Adreno 330 GPUs and 3GB RAMs. The Note 3, however has a bit higher CPU clock speed at 2.3Ghz compared to the 2.26GHz on the G Pro 2.

The Note 3 offers more storage variants ranging from 16GB to 64GB, while the G Pro 2 has 16GB and 32GB variants. Both devices support microSDs up to 64GB capacities.

The G Pro 2 and Note 3 are both equipped with 13 megapixel shooters with support for 4K video recording. However, the G Pro 2’s camera should be superior as it sports optical image stabilization (OIS Plus) compared to the Note 3’s software image stabilization.

The G Pro 2 will run the latest Android 4.4.2 Kitkat out of the box with a new UI. While the 5-month old Note 3 runs Android 4.3 Jellybean with TouchWiz. Note 3 owners shouldn’t fret though as it can be upgraded to Kitkat.

The G Pro 2 has FM Radio on board, a Rear Key, and a high power 1W speaker. The Note 3, on the other hand, has the S-Pen which is a good partner for productivity on-the-go.

The Note 3 launched locally last year with an SRP of almost Php37,000, but some online shops are now selling it for around Php27,000. As for the LG G Pro 2, the pricing is yet to be announced. If LG could price the G Pro 2 aggressively like they did with the G2 when it was launched locally then that would be great.

For now, which smartphone do you think is the best bet? Or should we just wait for the Galaxy Note 4 later this year? Share your thoughts below.