The internet goes crazy again for durability tests as this time, folks put the Samsung Galaxy S6 Edge under the bend machine to see how much pressure it takes to make a dent or to break it. 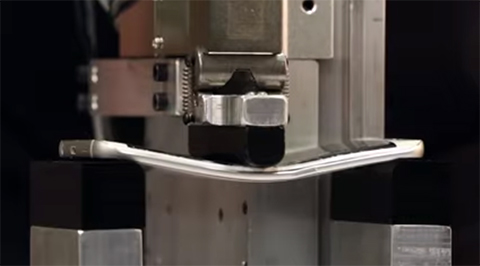 If you watch the video below, you will see that the Galaxy S6 Edge bends at 110 lbs just like the iPhone 6 Plus – where the HTC One M9 survived until the force was raised up to 120 lbs. Worse for the Galaxy S6 Edge, the glass starts to break as well because of its curvature.

Honestly however, we don’t think that this will pose as a problem to many buyers out there. We’ve seen that the Galaxy S6 Edge can take quite some beating in our reported drop tests, and this isn’t something that happened in user pockets either (iPhone 6 Plus bendgate).

Until the phone actually bends in your pocket, we don’t really think this will be an issue as no one should actually bend their phone this way. If you do happen to get a Galaxy S6 Edge, be sure still to take care of it as we know that it is one fragile device.