Hands-on with the HTC Butterfly

We went to several stores yesterday to check out the HTC Butterfly, ended up at the HTC Concept Store in Cyberzone, SM MegaMall and was able to play around with both the white and red models of the unit.

The Butterfly has a 5-inch display size but once you hold it with one hand, you won’t really think it’s that big. 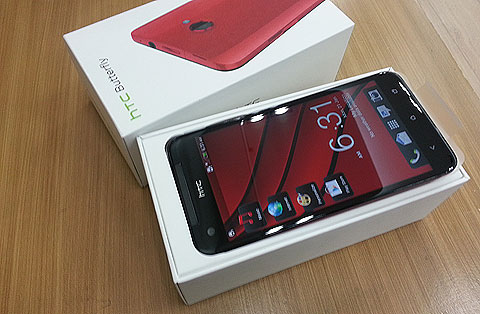 There are two color variants, black & red and white & red, with the front side all covered in Gorilla Glass 2 while the back side is a slightly curved polycarbonate body. 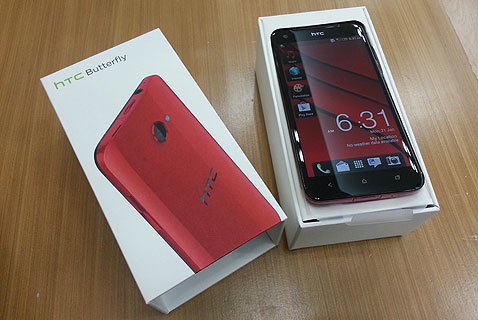 The shape is reminiscent of the HTC 8X except that the finish is really glossy all around the body and not matte like the 8X. It feels very light too for its size.

We inspected the 1080p display, and having used a lot of the 720p displays on the other flagship phones, we couldn’t really distinguish it from the rest on casual use. It might be different once we watch full HD movies or some hi-res photos but I guess that’s where the idea of pixel density comes in — that anything beyond 300ppi will look almost the same to the human eye. Nevertheless, the 441ppi looks impressive on paper. The micro-SIM card slot and micro-SD are both found on the top end of the phone, beside the power button and 3.5mm audio port, and is hidden by a small flip cover. The bottom end is where the micro-USB port is also hidden under a similar plastic flip cover.

The handset has a pretty solid body, a nice design that shows attention to detail and the two-tone adds to that premium look. However, the polished finish at the back makes it very prone to fingerprint smudges. That’s a departure to the usual matte finish HTC did with the One X+, One S as well as the WP 8X and 8S. HTC moved back to Qualcomm’s Snapdragon processor with the Butterfly (they used NVidia Tegra 3 on the One X and One X+). See full hardware configuration below.

The LTE option is not available to the units released in the Philippines but we’re hoping the telcos will carry that variant later on. 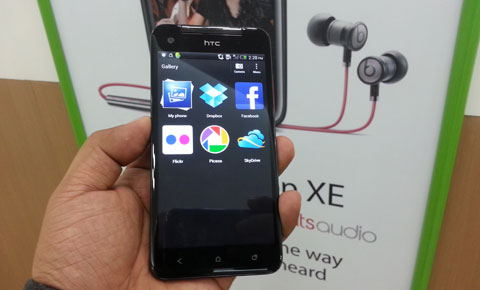 Check out the quick video we took of one of the units below. Show’s how HTC Sense UI makes good use of that screen resolution (more spaces for icons and widgets on the home screens).

Based on the figures given to us by the HTC Concept Store in Cyberzone, SM Megamall the suggested retail price of the HTC Butterfly is Php32,190 which can be had for zero interest on 12-months credit card installment. However, if you get it for cash or 3-month CC installment, the price drops to Php30,990.

there’s an LTE version of this… not just sure if thats the one being sold now in the Phils… http://www.youtube.com/watch?v=B8QSWPntiQk.

Very well said! No LTE. No DEAL! Any phone this price oughtta be future-proof!

Wait, this phone doen’t have NFC?

specs-wise, this phone goes head to head with the soon to be released Sony Xperia Z with a more compact build, water & dust-proofing, and a less heavy and more elegant UI customization (aka almost like stock Android). I hope the Xperia V gets more competitive pricing.

A very nice phone.. All these big players will seriously start thinking about lowering their costs as China phones are catching up on the smartphone bubble! :)

The only HTC phone I want.
How’s the battery life?

Being a user of Xperia V from Smart, any smartphone now without LTE on board is a bummer!

So you’ve got an LTE phone here in the Philppines… tell me again how many Gb is the cap?

LTE here is still in it’s infancy, very few reliable spots with very expensive plans. I’d rather keep my reliable HSDPA+ unlimited plan than to brag around my oh-so-LTE-ish balls.

At topic; specwise and features this is definitely one level better than GS3. I may consider this phone if I wasn’t locked to my plan. lol