HTC continues to produce really good-looking smartphones and the Desire Eye is no exception to that. The handset is among the latest smartphones the Taiwanese company released, combining a powerful hardware and elegant look. Check out our full review of the HTC Desire Eye after the break. Announced back in October 2014, the HTC Desire Eye takes its cue from the flagship One series but adopted the Desire line moniker which used to be representative of their mid-range category.

However, nothing in the build quality and the hardware specification of the the Desire Eye points to it being a mid-range handset. And while we can’t really say that the Desire Eye is an upgrade to the HTC One (M8), it’s like a reincarnation of the M8 in another body.

The Desire Eye separates itself from the One series with a bolder design, bright and colorful palette with a matte polycarbonate material that is reminiscent of the HTC One X and HTC One S from many years back. 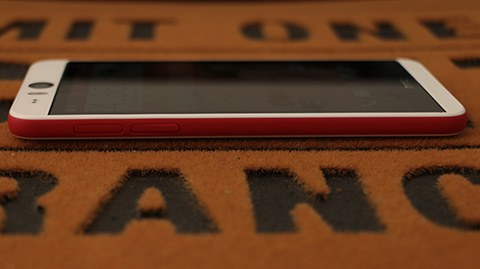 We’re still very impressed with HTC in the design department. They’ve been producing really beautiful handsets and the Desire Eye is no exception. HTC breaks the general perception that polycarbonate (read: plastic) materials are not as sexy and elegant as glass or metal alloy. The Desire Eye is a testament to that.

The Desire Eye has a very simple yet very clean design. The flat front and back panels have that matte ceramic finish that’s very much similar to the One X. The rounded corners are subtle with a slightly curved edge that offers a gentle comfort on the hands despite its rather large form factor. That comfortable feeling when holding the unit is almost the same as that of the iPhone 6 Plus, only lighter and less slippery. 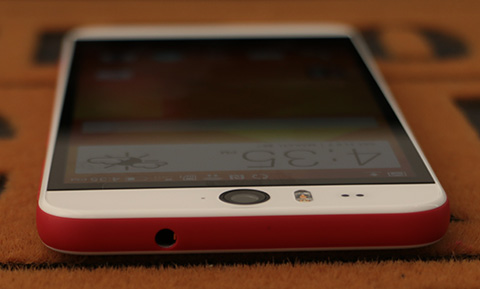 The ceramic white finish of the front and back panel sandwiches the bright red polycarbonate band around the sides. The color combination is loud and striking yet sublte and not over the top, unlike that of the Lumia series.

The power button, dedicated camera shutter and volume controls are on the right side while the microSD and nano-SIM card slots are found on the left side, both of which are protected by a water-proof flap covers. 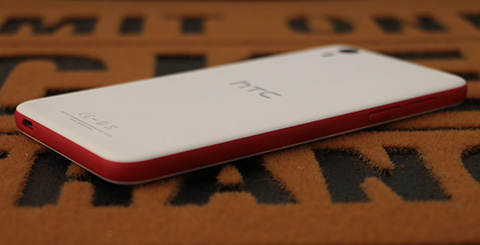 At the top is the 3.5mm audio port and at the bottom is the micro USB port. The unibody design gives it a compact and slim profile providing it the IPX7 water-resistance that HTC claims. This is actually a first for any HTC handset. 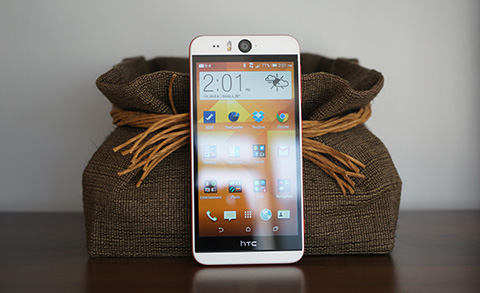 Just like the HTC One, the speakers on the Desire Eye are as effective since they are front-facing although we noticed the sound is not as loud as its predecessors.

Perhaps one of the more rarely used display panel is Super LCD3 and we only see HTC using them in its flagship and high-end phones. Unlike AMOLED display, Super LCD is more power efficient with displaying white backgrounds. 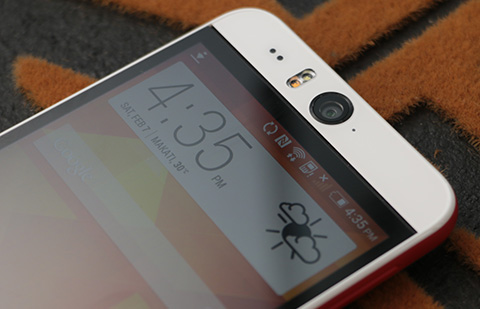 It has also improved in terms of viewing angles and produces less glare because of the absence of the air gap between the outer glass and the display element. AMOLED produces darker blacks though so there’s a trade-off.

With a low 66.7% screen-to-size ratio, the device does look a bit larger than usual. That’s because of the area occupied by the large camera lens, the speaker grills and the logo. 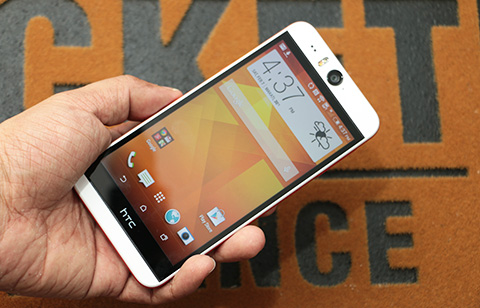 The bezels are prominent as it drops against the white background of the body and the glass panel does not stretch the entire front side to make way for the BoomSound speakers hidden at the edges of the glass.

The Desire Eye came with Android 4.4.4 Kitkat right out of the box with promise of a Lollipop update very soon. HTC a few more customizations and features into the operating system, one of which is the ability to connect with an HTC Mini+ — a compact companion device that pairs with the handset to receive and make calls as well as check SMS and other notifications (see more about it here). 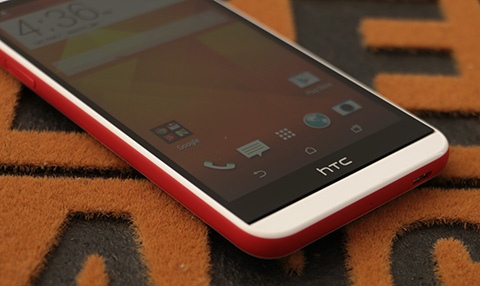 Running on Android 4.4.4 Kitkat, the Desire Eye comes with a custom HTC Sense UI 6.0 which looks simpler and optimized but with BlinkFeed still in place and set as a secondary home screen you can pull out by swiping from the left. 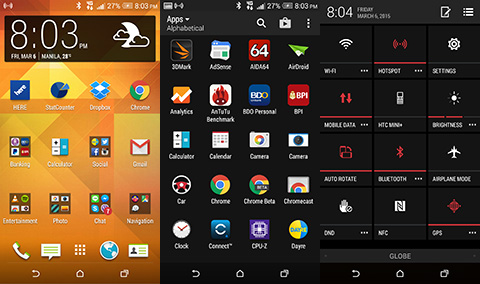 The Sense UI has been HTC’s long-time advantage over other brand’s user interface for many years. However, Sense UI 6.0 did not seem to have any significant improvements over the last 2 or 3 iterations. While it still has the finesse and flair but nothing really unique that would set it apart from the others.

The Desire Eye’s claim to fame is its dual 13-megapixel camera — an exactly identical sensor both at the rear and front of the handset. 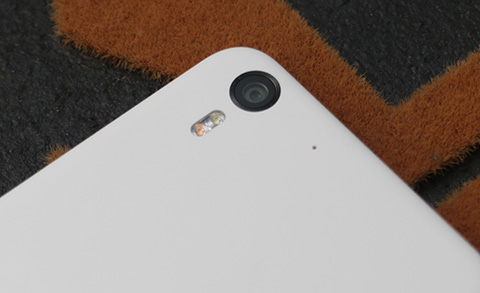 Obviously, this is where the handset got its name — with the large camera lens looking like a cyclops. The front camera also comes with a dual, two-tone LED flash, just like the one at the back.

Both take great stills and video although low-light performance is not that impressive. HTC is aiming to attract customers who have selfie-obsessed tendencies and the Desire Eye sure looks like it’s got the snapper to do that task right.

Here are sample clips we took using the rear camera:

The BoomSound speakers are still there though they are not as prominent as the ones in the HTC One M8. The sound quality is also good but we feel it’s not as loud as the M8 as well. In any case, we still think it’s a good implementation of a handset’s speakers.

We also took out the HTC Mini+ which we were using on the M8 and paired it with the Desire Eye. The handset companion works really well and offered some practical convenience. 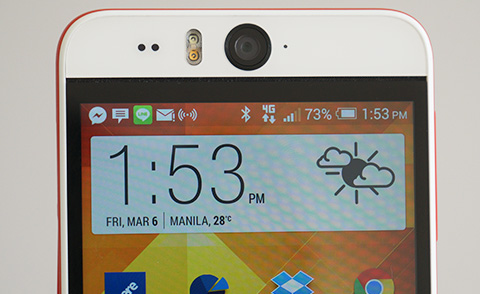 We’re also glad to discover that the Desire Eye is also water-proof under the IP67 rating. That means you can submerge it under water up to 1 meter for a maximum of 30 minutes. While it has been employed and popularized by Sony in its Xperia line and followed by Samsung with the Galaxy S5 and the Galaxy Active series, this is a first for any HTC devices we’ve tested.

The Desire Eye performs almost as fast as the HTC One M8, noting the fact that they both have quite similar hardware configuration (the Snapdragon 801 on the Desire Eye has a clock speed of up to 2.27GHz while the one on the HTC One M8 goes up to 2.46GHz). Here are the results of the first set of benchmarks we ran on the unit:

Majority of the benchmark scores are slightly higher than the HTC One M8 as well as several other flagship handsets of 2014 (LG G3 and Galaxy S5).

In the connectivity department, the handset has everything from LTE, WiFi, Bluetooth, NFC, Radio, GPS. The Desire Eye also supports wireless connection with the HTC Mini+. LTE connectivity is compatible with both Globe and Smart networks and random tests gave us up to 27Mbps at times. 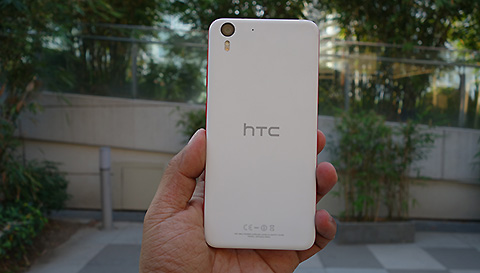 Call quality is good, reception is clear and the dual front speakers are great when taking calls on speaker-mode. Wireless and cellular reception are strong and SMS exchange are pretty quick both when sending and receiving.

As for battery life, we were originally worried about the 2,400mAh rating of the Desire Eye. However, upon testing we got very good results based on our standard battery bench — 13.5 hours on continuous video loop of an HD movie at 50% brightness and 0% volume. That’s surprisingly way better than the 2,600mAh of the HTC One M8 that only got 10.5 hours on the same test. Perhaps the combination of firmware optimization and Lithium polymer technology extended the battery life significantly.

I have always been a fan of HTC’s design ethos — simple yet sexy, bold yet subtle and with a unique twist on the execution. The Desire Eye, like many other HTC smartphones before it, is a thing of beauty. It is a well rounded, well-equipped handset that puts everything else in place. 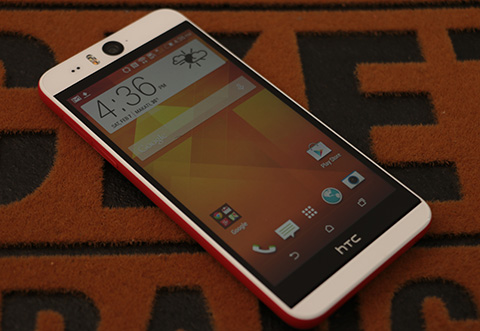 However, there are very few reasons anyone would get this over a similarly priced but older HTC One M8 — among them is the front camera system and the IP67 rating.

Too bad the brand has moved out of the Philippines not too long ago due to declining sales and very little marketing support.

Nevertheless, one can find a unit or two being sold in the gray market (mostly online sellers) for around Php22,000. At that price tag, the HTC Desire Eye is a pretty good catch.

What we did not like about it:
* Low screen-to-size ratio (66.7%)
* Meager internal storage