HTC outs an EYE version of their flagship smartphone

HTC outs an EYE version of their flagship smartphone

In line with the launch of the Desire EYE, HTC has quietly added the HTC One (M8 EYE) to their portfolio which is a tweaked version of their current flagship smartphone that sports a 13MP megapixel rear camera with Sony IMX214 sensor. 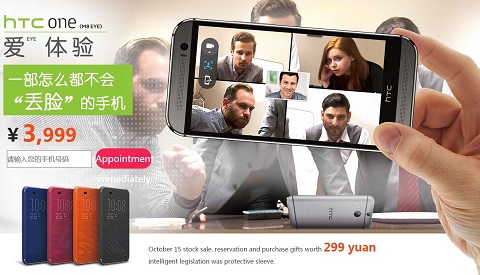 Other than the revamped rear optics, the HTC One M8 EYE is virtually identical to the Taiwanese firm’s current hero device. The only other difference on the “new” handset is the addition of the HTC Eye Experience customizations which allow users to do these things:

The HTC One (M8 EYE) is equipped with the same 5-inch S-LCD display with 1080p resolution and runs on Snapdragon 801 quad-core SoC with 2GB of RAM.

There’s still now word if the EYE version of the HTC One M8 will be sold outside of China. But if you’re interested in getting one, it will set you back ¥3,999 a pop.

Source (in Chinese)| Via