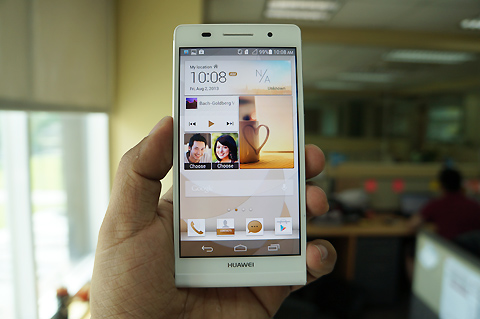 The Ascend P6 has a very simple yet elegant and refined design. It looked so simple that it resembled the iconic look of the iPhone 5 with its solid metal look and rounded corners. Add to that the two-tone combination of silver and white colors, a polished metal finish around the trimmings and a flat white polycarbonate back panel.

The rounded edge at the bottom corner is a distinctive touch and the only thing we could see that separates the over-all look from the iPhone 5. the black variant though has a much different treatment. 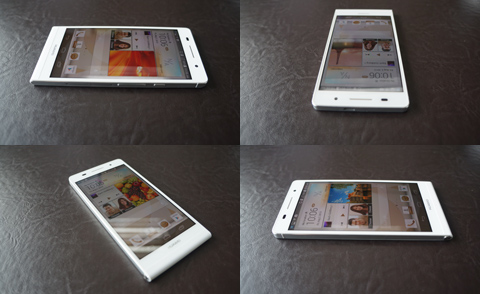 Both the power button and the volume controls are found on the right side, along with the slot loaded micro-SIM card tray and the microSD card slot. The micro-USB charging port is found at the top end whiel the 3.5mm audio jack is actually hidden by a pin cap at the farthest corner on the left. The pin cap is used to pop open the card slots for the micro-SIM and the microSD.

The two pairs on micrphones are found at the top and bottom end of the handset, one for voice calls and the other for active noise-cancellation. The Huawei logo is prominently featured at the front panel, just below the soft buttons and then again right in the center at the back. 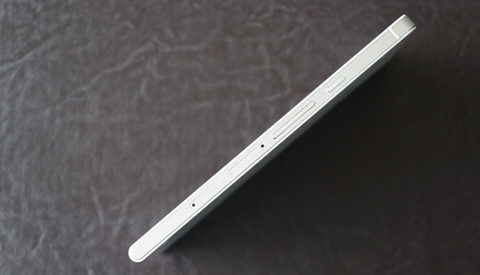 The 8-megapixel camera at the back is flushed at the top-left most corner along with the accompanying LED flash while the speaker grills are found at the opposite corner.

The back side has a somewhat polished finish and smooth rubbery texture that helps add more grip. The white variant can be a real dirt magnet so it’s nice that Huawei included a translucent, soft gel case along with it.

The Ascend P6 looks really stunning, there’s a keen attention to detail and we can certainly say that it is Huawei’s sexiest and best designed handset so far.

With a display size of 4.7 inches, the P6 just the right amount of screen real estate. As always, Huawei uses an IPS LCD panel and puts the resolution at 720p. While we’re already used to the full HD 1080p resolution of most other brands, 720p on a 4.7-inch still looks are sharp and crisp like the others. 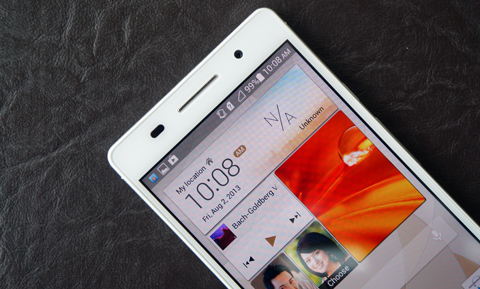 This decision is certainly a factor that allowed Huawei to price this device more affordably.

The display looks very clean, sharp and more than enough screen brightness. Hauwei also added a feature setting that allows you to also adjust the color temperature of the screen from a slightly yellowish tinge to a brighter blue tinge. 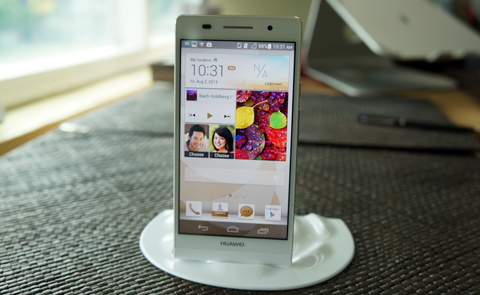 Viewing angles are very good, glare is manageable even under direct sunlight or bright light sources. The three (3) soft buttons occupy some parts of the screen and still appears even when apps are full or inside a game.

There’s this Gloves Mode that once you activate, it will make the screen more sensitive so you can still use the touchscreen while wearing any gloves.

Huawei has been trying to differentiate itself by trying out a more simple approach in their UI. Called the Emotion UI 1.6, the interface is very flat and straight-forward. There’s no App drawer so all the widgets and apps are organized in the homescreens. You can have as much as 9 home screens and once you filled that out with apps and widgets, you will be forced to group the icons into folders. This is exactly the same style with iOS, sans the widgets. 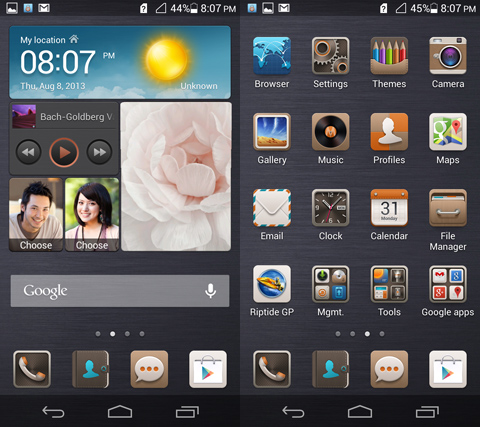 There’s a shortcut bar that hovers at the bottom, just above the soft buttons. You can arrage up to 5 icons in the shortcut and after that, you’ll have to group them in folders as well. Without the widgets, the Emotion UI will actually look very much like the interface on iOS devices.

The P6 comes pre-installed with the latest Android 4.2.2 update and gives you access to hundreds of thousands of apps on the Google Play Store so there’s really no lack of options and customization available to the user. 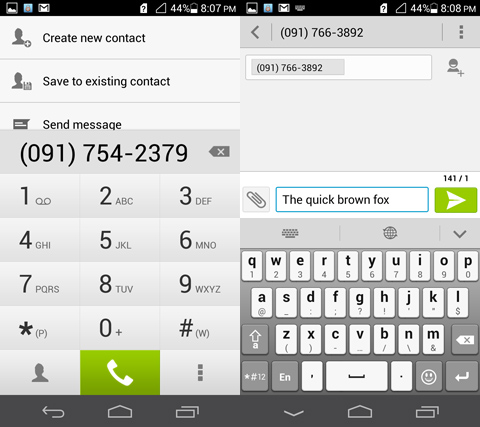 The native keypad for making voice calls is simple and functional; so is the virtual keyboard for composing text.

Multimedia consumption on the P6 is a bit of hit or miss — while the 4.7-inch display is more than enough for watching videos or viewing the web, the built-in speakers aren’t that loud enough as we thought. The sound is actually good — crisp and clear — but I guess we were looking for more volume especially when watching movies.

There’s built-in FM radio tuner and you will need the headphones attached to serve as an antenna for it.

One of the more significant feature of the Ascend P6 is the 5-megapixel front-facing camera. It was specifically built with a larger camera for people who loves doing selfies. This is evident with the Beauty Shot function when switching to the front camera.

The rear takes good camera but we find the sensor to be a bit slow, especially in low-light conditions. here are some sample photos we took using the 8MP rear camera.

Video is nothing exceptional — ranges from fairly decent to good, and does the job fine. Here are some clips we uploaded on YouTube.

We have to note again that the pin cap on the 3.5mm audio jack needs to be removed when using the headphones and due to its small size, could easily get lost which we did in just after a couple of days of using it.

The Ascend P6 comes with Huawei’s own ARM-based quad-core chip which has been used in previous models for about a year now, starting with the D Quad and Quad XL. It’s a pretty capable chip and when paired with 2GB of RAM, can prtty much handle anything you throw at it. 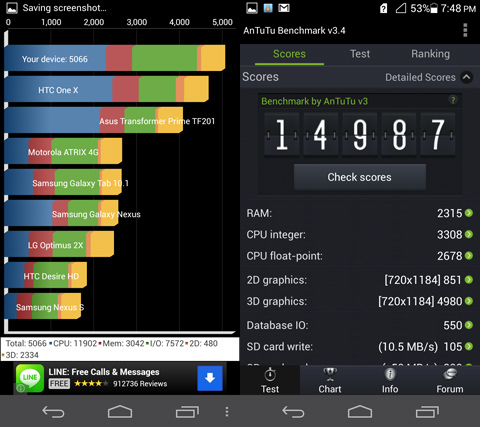 Quadrant Standard score tops at 5,066 while Antutu Benchmark went as high as 14,987. Based on the scores, the Ascend P6 sits somewhere in the middle of other flagship handsets in terms of raw performance.

The Ascend P6 lacks the options for fast LTE connectivity and NFC. While NFC might not be that useful or practical at the moment, we were hoping Huawei could at least have LTE on their devices. 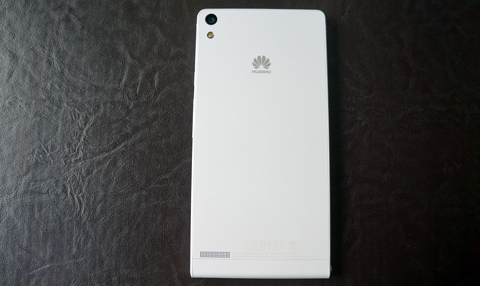 Our standard bench for battery test is a full HD 1080p video played in a loop at 50% brightness and 0% volume lasted the Huawei Ascend P6 around 7 hours 45 minutes.

The Ascend P6 combines a good set of hardware in a very sexy design and super thin form factor that very few other handsets have achieved. Huawei has certainly done a lot of effort in order to give the P6 the title of world’ thinnest and the attention to detail is very evident. The P6 represents the best Huawei can do at the moment and though it might not be as impressive as other high-end flagship devices that came with full HD display, NFC and LTE, the Ascend P6 can still handle itself just fine.

The Huawei Ascend P6 is available in stores nationwide with a suggested retail price of Php18,990. It’s also available for free under Globe postpaid plan with a Php999 monthly fee.

What we liked about it:
* Great design
* Super thin form factor
* Good display quality and resolution
* Competitive pricing in the flagship category

What we did not like:
* So so battery life
* No LTE option

Low quality photos? This is a major draw back.

sir abe. or anyone in this forum. which is better huawei p6 or lenovo k900?
huawei is a good company. not bcoz china made gnyan n agad ang mentality nyo. i thnk its better parin with CM MP at SM

Wow nanghusga kgad.. fyi lenovo oriiginate from China too.
Anyway, specs-wise lenovo na.. no idea about pricing but if there is a little difference.. L will do.

How’s the overall feel of the UI and user experience? *I* didn’t get quite enough about that aspect.

Thats the reason why portable charger was invented.

Hi, this review is very nice. I want to inquiry for your ADVERTISING SPOT please contact me throught the aatached email above.
jogie at merimobiles dot com. thanks a lot

thanks for the review sir abe

Been reading this site for quite sometime,and I must say galing ni abuzalzal magtroll. One of the things Im looking forward to reading are the hilarious reactions he gets from the replies he gets(apart from the stories). Lol. I cant say I agree with him all the time but damn, he does get you wild up.
That aside, I’d say specswise, you get ’em locally, if you know where to look.

There will always be a discrepancy when you compare street price vs. SRP.

it’s the marketing dept. who usually decides the price for a product and you should really put your middle finger on ’em.

a company is always different from a self-established business you know? if you’re really a business owner, try learning how business works from a source or two, okay?

and quit claiming you’re some owner of your so-called “car aircon repair business” because you don’t look like one; judging by the way how you spoke.

P.S. thank you for wasting my keyboard’s lifespan and my valuable time by making me type such comment that even a pre-schooler could understand. and quit rollin’ and trollin’ okay?!

oh, by the way i agree with you that going with a Note 2 is much better buy than this. the cpu of this smartphone is decent but the gpu is so-so because it’s another vivante gpu, a weakling gpu.