After a couple of rumors on Huawei’s spec-heavy smartphone, the company makes official the Honor 6. It has Full HD resolution on a 5-inch display and carries an octa-core chipset with a partnered 3GB of RAM. With its specs and benchmark results, it aims to take on the likes of Samsung’s Galaxy S5 and Apple’s iPhone 5S. 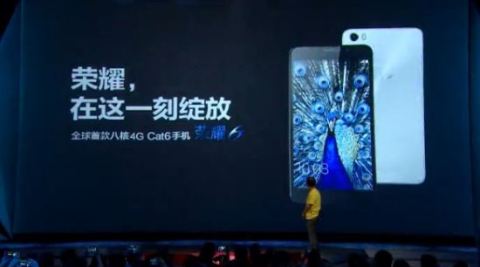 There are a couple of noteworthy elements Huawei has incorporated in the Honor 6. It has sub-3mm bezels around the display for better viewing and there’s the Kirin 920 chipset which scored 37,999 on AnTuTu benchmark, beating the Galaxy S5 and iPhone 5S. It also sports a speedy Cat. 6 LTE that can go up to 300Mbps of downlink speed, same performance found on a dual-channel Wi-Fi 8.2.11n.

Talking about its form factor, the device is really slim at 6.5mm and is made of aluminium alloy that helps in maintaining the chipset to run cooler than its predecessor. It has also been reported that Huawei brags about how much more the battery of the Honor 6 can provide versus other flagships. “…lasting more hours per mAh battery capacity than the Galaxy S5 and double what the iPhone 5S gets.”

There’s still no word on its pricing but previous rumors said that it could also be positioned like Xiaomi – offering competitive price points for its consumers. Stay tuned as we get more details on its official price and availability.