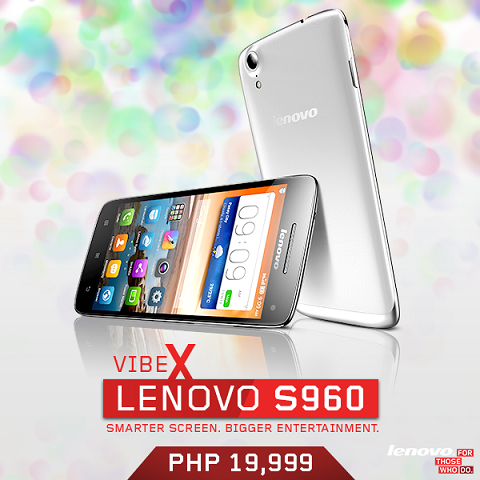 On paper, the S960 is flagship material, sporting a 5-inch, 1080p IPS display panel coated with Gorilla Glass. Its internals are pretty respectable as well, composing of a quad-core processor with 2GB of RAM and 16GB worth of default storage; all housed inside wafer-thin 6.9mm body.

The only thing that’s a bit undermining though is the lack of slot for a Micro-SD and that it only runs on a rather weak 2000mAh battery. Other than that, the new Lenovo Vibe X S960 is viable option for those in the market for 5-inch 1080p handset under 20K.

I find this too expensive for what it is, it should only be at 16k.

IMO, the nexus4 is WAAYY cheaper (P14k+ i think) than this phone. Getting software updates is ALWAYS AN ADVANTAGE with a nexus device. And if you’re willing to wait (and spend) a bit more, then go with the nexus5 with an excellent price to value ratio.

Lol, 20k? The Lg G2 is waaaaay better than this even if it costs 7k more

Why compare a upper mid range to a high end. 7k is a third of 20k. Malayo na price difference bro.

Aqua
Reply to  someone

Well, you’re already spending 20k so why not just add a bit more (~7k-ish) and get a G2. Imo, the price is not justifiable.

Quite right. In fact, some online sellers are selling the LG G2 for less than 23K.

Great specs, the only downer is the battery.