We’re here in Beijing, China for the Lenovo Tech World and the company has shown to the media their camera-centric smartphone that boasts a 16 megapixel camera with OIS, IR AF and Tricolor flash – the Lenovo Vibe Shot. Check out our first impressions of the device below.

The Lenovo Vibe Shot is a smartphone that looks like a point-and-shoot. It sports an edgy look that reminds us of the Vibe X2 but instead of plastic it features a metal frame. 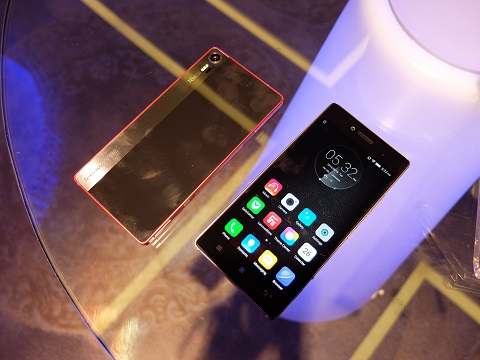 On the front we have the 5-inch Full HD IPS display which we found to be crisp, vibrant, with good viewing angles. Situated above it is the earpiece, 8 megapixel camera, light sensor, and notifications light. Down below are three illuminated capacitive buttons for navigation. On the left are two trays for the nano SIM cards and microSD card then down at the bottom corner is a provision for a wrist strap. 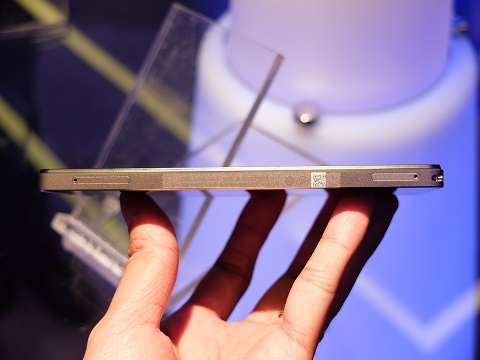 On the right are the metallic buttons for the dedicated shutter, power/lock, and volume rocker, as well as the dedicated switch for the camera’s Auto and Pro modes. Up top we have the headset jack and secondary microphone, while down at the bottom are the microUSB port and grills for the speaker and main microphone. Flip the Vibe Shot on its back and you will see the glass rear and digicam-inspired look. Taking the spotlight here is the 16 megapixel BSI camera with OIS and Tricolor flash. 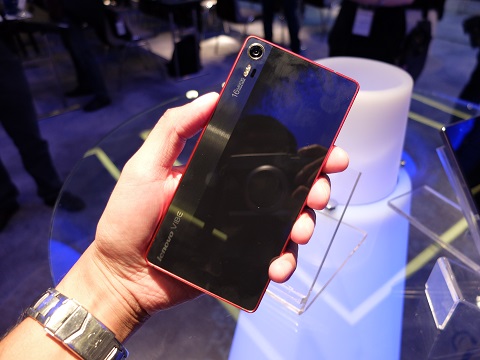 One of the main features is the IR Autofocus with a claimed performance of 20 milliseconds for range finding, 150 milliseconds for fine tuning, and 24 frames pers second focusing. The IR AF range finding is limited to 50cm and switches to infinity focus when it cannot find an object within 50cm. Lenovo says that this makes the Vibe Shot’s AF 2x faster than conventional AF. 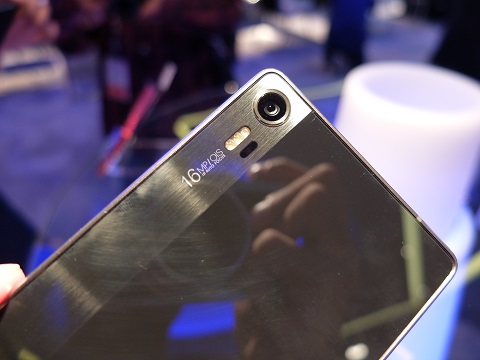 On hand, the Vibe Shot feels light at 145g despite the metal frame and glass front and back which are prone to smudges. At 7.3mm it’s also as thin as the Vibe X2 which we reviewed before. It comes in three colors: Crimson, Pearl White, Graphite Grey. 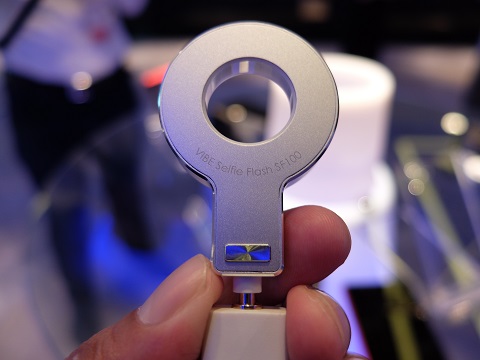 Lenovo also showcased an accessory for the Vibe Shot called the Vibe Selfie Flash SF100. It’s a LED flash ring that attaches to the Vibe Shot’s headset jack and charges via USB using an adapter. It’s manually triggered and emits a light for about 5 to 6 seconds, just enough for you to take selfies in the dark. 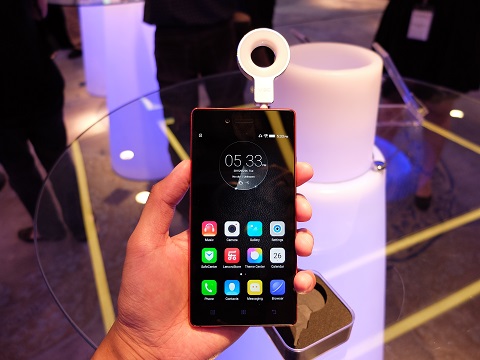 The Vibe Selfie Flash and the wrist strap will be sold separately although Lenovo is still deciding if they will bundle it when the phone goes on sale in other markets. 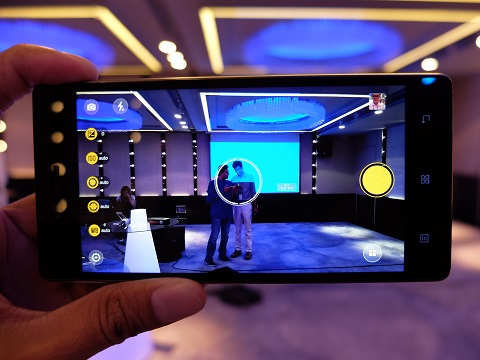 The Lenovo Vibe Shot is priced at US$349 (plus taxes and other fees) and is slated to be launched in the Philippines in the second half of July.