Introduced early this month we had the chance to test out Lenovo‘s camera-centric device, the Vibe Shot. It flaunts a glass panel up front and even at the back, has a decent Snapdragon processor, and is equipped with a camera that’s supposed to give its users full control on its settings. Will this be a worthy phone/compact camera? Read on our full review and find out.

Note: We have the video version of this review that shows the Lenovo Vibe Shot in more ways than the still photos could demonstrate. It also includes sample videos taken with the device. The Lenovo Vibe Shot is a smartphone that looks like a point-and-shoot camera. It sports an edgy look that reminds us of the Vibe X2 but instead of plastic it features a metal strip that surrounds the device. Up front we have the 5-inch Full HD IPS display and situated above it are the earpiece, 8-megapixel camera, light sensor, and a notification light. Meanwhile, down below are three illuminated capacitive buttons for navigation. 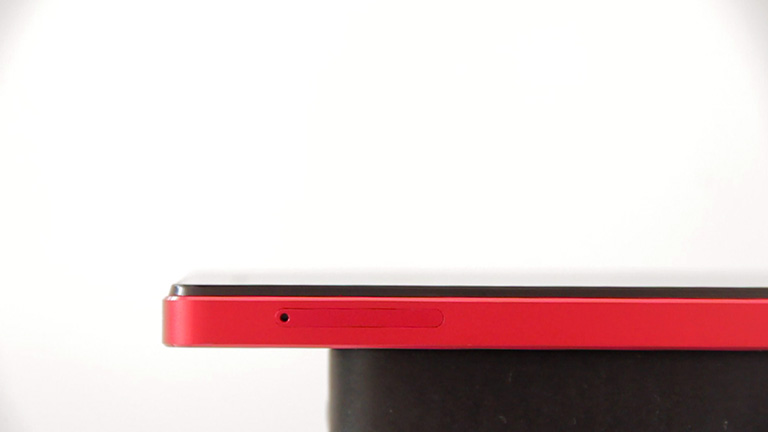 Housed on the left side are two trays for the nano SIM cards and microSD card, while down at the bottom corner is a provision for a wrist strap. 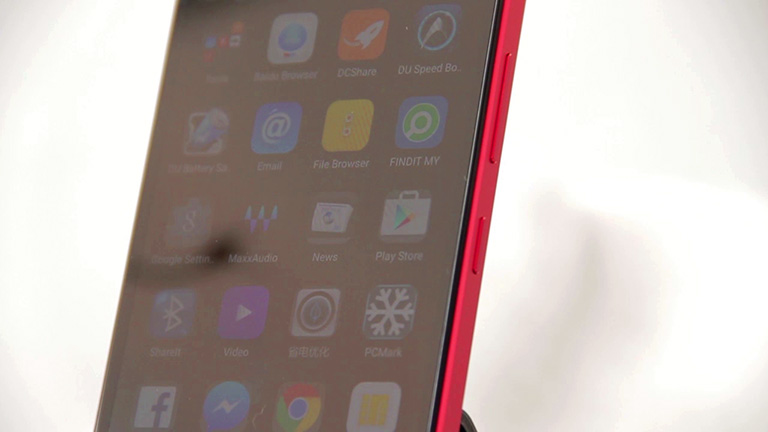 However, the right panel are where the metallic buttons are located for the dedicated shutter, power/lock, and volume rocker, as well as the dedicated switch for the camera’s Auto and Pro modes. 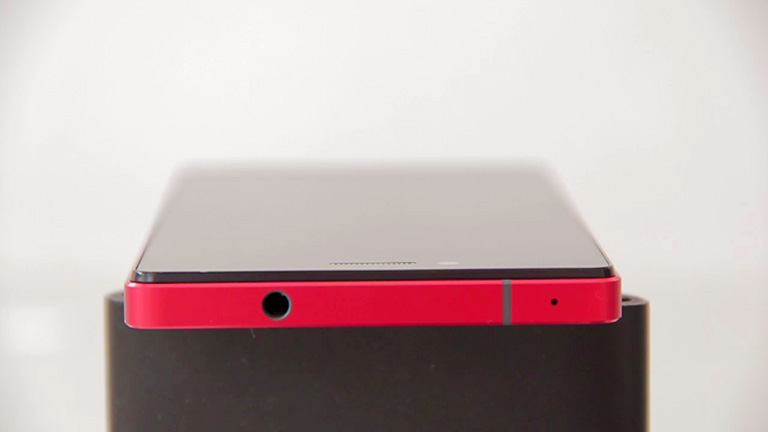 Up top we have the headset jack and secondary microphone, and down at the bottom are the microUSB port and grilles for the speaker and main microphone. 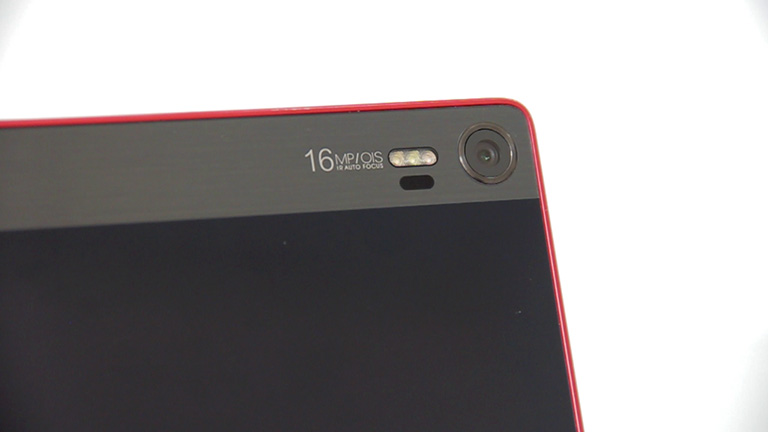 Flip the Vibe Shot on its back and you will see the glass and digicam-inspired look. Taking the spotlight here is the 16-megapixel BSI camera with OIS and Tricolor flash. 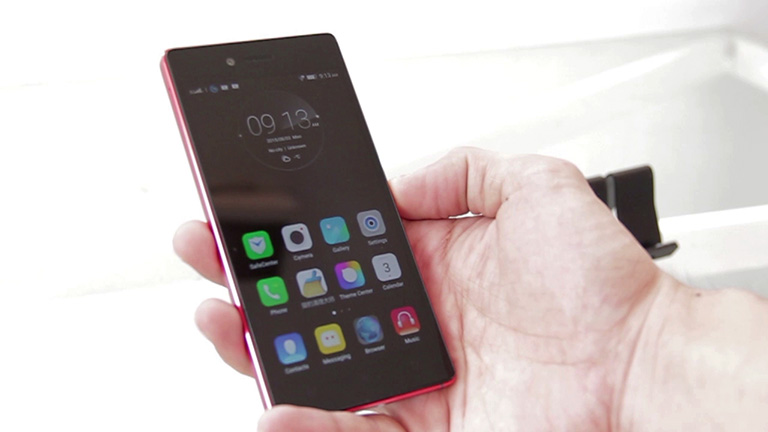 Holding it, the Vibe Shot feels light at 145g despite the metal frame and glass front and back which are prone to smudges. At 7.3mm it’s also as thin as the Vibe X2 which we reviewed before. Carrying a 5-inch display with a screen resolution of 1920 x 1080, the Vibe Shot packs in 441ppi which translates to a detailed and enjoyable watching experience. The display also boasts IPS quality making its viewing angles flexible whether you look at it up front or from the sides.

As for the picture quality, it’s Full HD resolution makes it close to like watching high-res movies on an HDTV but only smaller. Colors are vibrant, but not overly done so that’s a good thing. Plus, the blacks seemed like true blacks and not at all gray-ish.

One thing we really liked about this is the capability of its speakers to go really loud. The grilles which are located at the bottom of the device produce volume that no longer requires you to wear a pair of headphones when you’re in a controlled environment since you can hear the details clearly — from the sound effects, background scoring, and even down to the dialogue, we were able to distinctly hear and perceive the details with clarity. 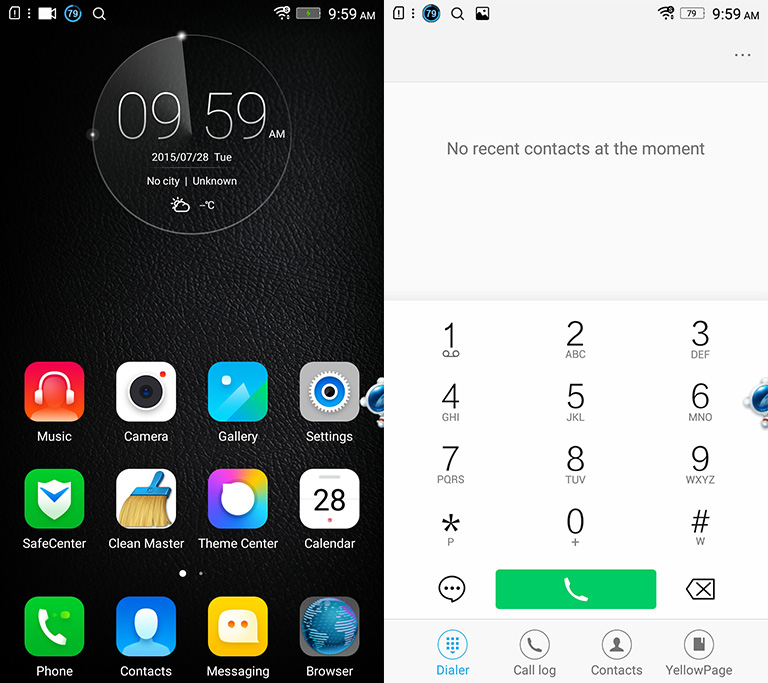 The device runs on Android 5.0 Lollipop out-of-the-box so users will get to enjoy the latest software from Google from the get-go. As for the UI, the minimalist approach of the software with colored tiles are present here and from the two weeks that we’ve used the device we’re glad to report that we haven’t experienced any major lags or crashes.

Talking about pre-installed apps, the Vibe Shot has a few like MaxxAudio , Baidu Browser, DCShare, and the usual battery-saving apps. Out of its total storageof 32GB, users are left with around 24GB due to the memory taken up by its OS. Touting a 16-megapixel rear shooter with BSI sensor, Infrared autofocus, and Tricolor flash, you know the company has mightily equipped its optics with tools that SHOULD produce decent (if not superb) images. Additionally, taking care of the users’ selfie needs is an 8-megapixel front camera.

One of the main features of its camera is the IR autofocus with a claimed performance of 20 milliseconds for range finding, 150 milliseconds for fine tuning, and 24 frames per second focusing. The IR AF range finding is limited to 50cm and switches to infinity focus when it cannot find an object within 50cm. Lenovo says that this makes the Vibe Shot’s AF 2x faster than conventional AF. True enough, we witnessed this feature in action and had no problems focusing on our subjects.

With those in mind, let’s take a look at the sample photos below:

Judging from the quality of the photos, the Vibe Shot indeed has got the imaging game going on as the camera was able to produce clear images not only during the day where light is abundant, but also even at night when light wasn’t as readily available. What we noticed was as long as you just give its sensor even a little light, it will be able to compensate for the entire image and make the shot (at the very least) decent.

What turned us off, on the other hand, is its HDR feature which, from a photo-centric device, should be impressive. Alas, we found ourselves unmoved and unimpressed when we saw the overly-saturated images.

As part of its specialization in camera, the Vibe Shot has very flexible settings that users can fiddle and experiment with. For one, there’s the physical toggle right beside its shutter button that sets the camera to either Auto or Pro.

On Auto, the settings will be automatically adjusted depending on what you’re shooting, although if you want to have full control over the camera you can flick the toggle switch to Pro which gives you control to its ISO, shutter speed, focus, exposure, and white balance.

Having those function typically is nifty, but in this case it’s only half the fun. This is mainly because the shutter speed and white balance are the only ones that have live preview of the changes being made. For example, you change the white balance and you can see the live view changing colors. But when you tweak its exposure, ISO, or shutter speed, your live preview doesn’t change so you really don’t know how your shot will be like.

After capturing the photo, that’s the only time you’d realize that your ISO or shutter speed was off and you’d have to retake the shot again. We would usually let issues like these pass, but this specific device concentrates on imaging and we couldn’t just ignore that. 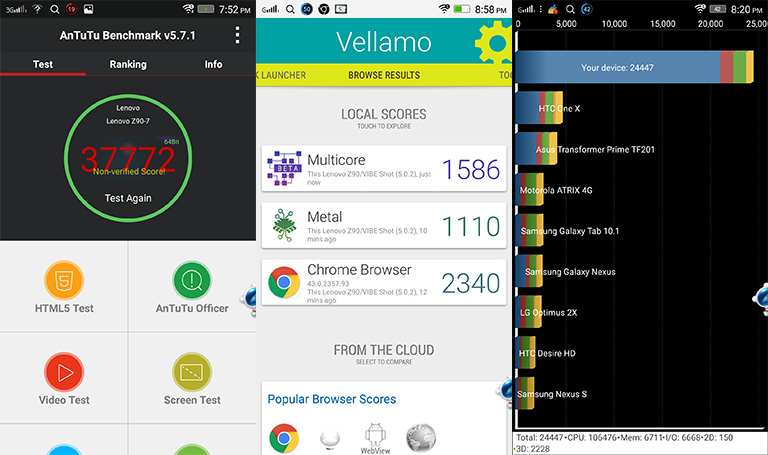 Running on a decently-spec’d Snapdragon 615 processor clocked at 1.7Ghz and working with a 64-bit chip, the Vibe Shot processed tasks confidently when we used it for menial tasks like web browsing or running light apps. Although when we started to load process-heavy games, we started to feel that the device was having a bit of a hard time since we experienced slight lags every now and then, plus the chassis started getting warm.

With the time we’ve spent with this handset, it was able to handle all the tasks, with just slight hiccups when running process-heavy apps. Overall, we could still say that it performed well and we understand it falling a bit short on gaming since this is an imaging-centric device.

Here are the benchmark scores for comparison’s sake:

The Vibe Shot supports both 3G and 4G connectivity so its users may opt to activate its mobile data so you can surf the Internet even when no Wi-Fi connection is available.We tested its LTE reception and we had no problems while browsing around BGC area and Quezon City area. Over at Cavite, though, signal was intermittent which is just normal for people in Bacoor area.

As for call quality, everything went a-okay after we tried using it for making calls — voices from both ends were audible and background noise were hushed down to a minimum. The device also has Bluetooth 4.1 with A2DP on-board so pairing with speakers or other devices was easy just like how it should be. 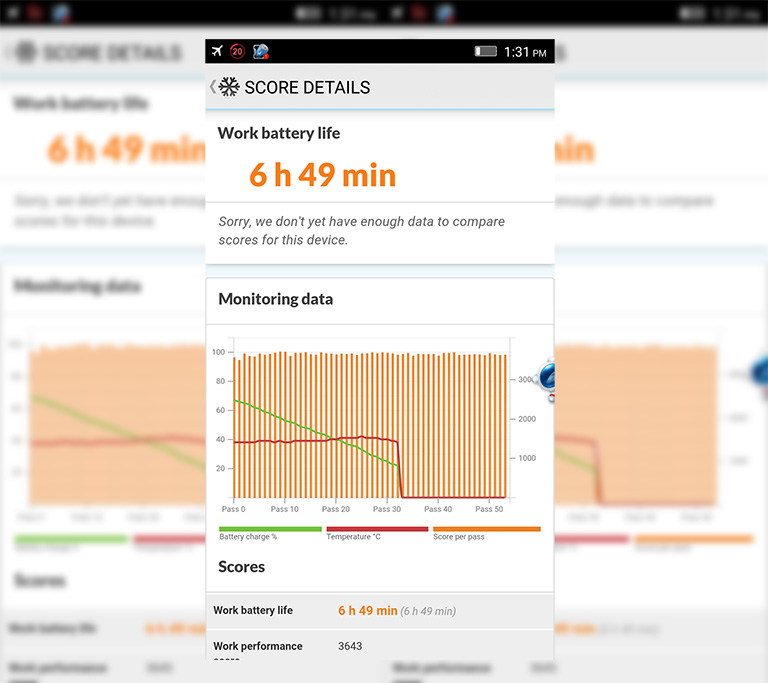 Running the usual PCMark battery test on Airplane Mode, 0% volume, and 50% brightness, we were able to squeeze out 6 hours and 49 minutes of continuous usage from the 2,900mAh battery of the Vibe Shot.

This puts its battery life in about the same range as the LG G4 with 3,000mAh capacity that lasted us 6 hours and 25 minutes, although keeping in mind that it has a rather larger display at 5.5 inches.

Let’s take a look at the Lenovo Vibe Shot both as a phone and as a camera. As a handset, it had no problems with everyday tasks like surfing the net, browsing through social media sites, and the like. It could even handle heavy games if you don’t mind it getting a bit warm. Plus, its crisp display and powerful speakers also make it a commendable media device.

As for the camera, however, the Vibe Shot left us with a feeling of wanting more. Yes, it could take sharp, lively, and promising images on Auto Mode, but switch to its Pro Mode and you’ll be faced with half-baked features that simply weren’t impressive for a device that focuses on imaging. For us, about 25% of its camera app could be considered ‘gimmicky’.

As a whole, the Lenovo Vibe Shot is a real looker with its sexy design, a capable and reliable smartphone for everyday usage, and comes with a good camera for your daily snaps — just don’t get your hopes up and expect to have something like a compact camera at your disposal.

Disclosure: The review unit was provided by Widget City and is priced at Php15,490. See listing here.

The Lenovo Vibe Shot is officially available in the country via Lazada for Php16,999. See listing here.