At an event, or should I say party, held at The Bonifacio High Street’s Amphitheater, Nokia has officially announced the arrival and pricing of their flagship device, the Lumia 900. We also spotted something rather surprising. The â€œLumianationâ€ was nothing short of spectacular (kudos to Nokia and the other people involve for making this launch a success, not to mention memorable). The Amphitheater was packed with people from the press, bloggers and Lumia as they await the announcement of Nokia’s top of the line handset. While waiting for the announcement, the audience was entertained by the Jump Smokers dance group backed by an outstanding mixes by DJ Nina and DJ Flipside. 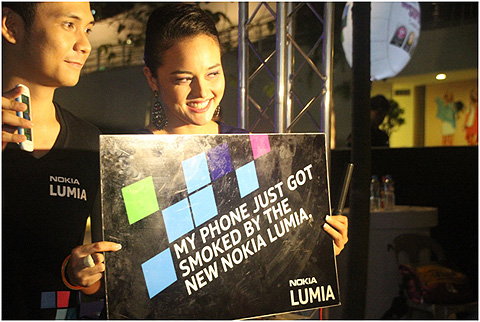 There was also a Nokia booth that showcased their Lumia handsets and booths for Nokia’s telco partners. Ms. Kat Alano who hosted the event went around these booths and did a short interview of the people there. She, along with the other who dared, was also smoked in the Nokia-WP7 challenge as shown in the picture above. Nokia has also given away a handful of Lumia handsets to attendees and are drawn electronically.

At the height of the event, just moments away from the official announcement of the Lumia 900, spectators marveled at the 3D presentation of the evolution of Nokia smartphones projected at a building at the side of the Amphitheater.

The Lumia 900 is said to hit the shelves this June for Php27,990 and will come with a free Nokia Purity Headset by Monster.