As mentioned in our hands-on, the nubia REDMAGIC 6R surprised us with its slim and light body, which is uncommon for gaming smartphones. In addition, it’s got a nice design, powerful specs, and gaming-centric features. But it’s not without limitations, especially given its relatively low price. So should you get this one, or are you better of with the more expensive gaming smartphones? Find out in our review. 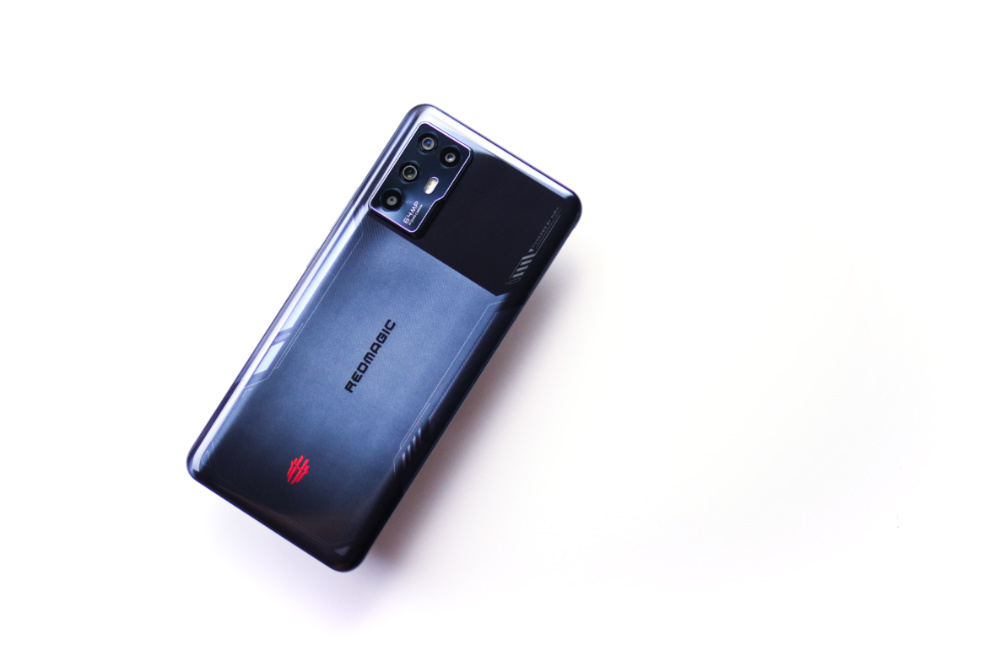 One of the things that surprised us about the REDMAGIC 6R is its slim and light body. It only measures 7.8mm thin and weighs 186g – that’s the dimension of a typical smartphone. 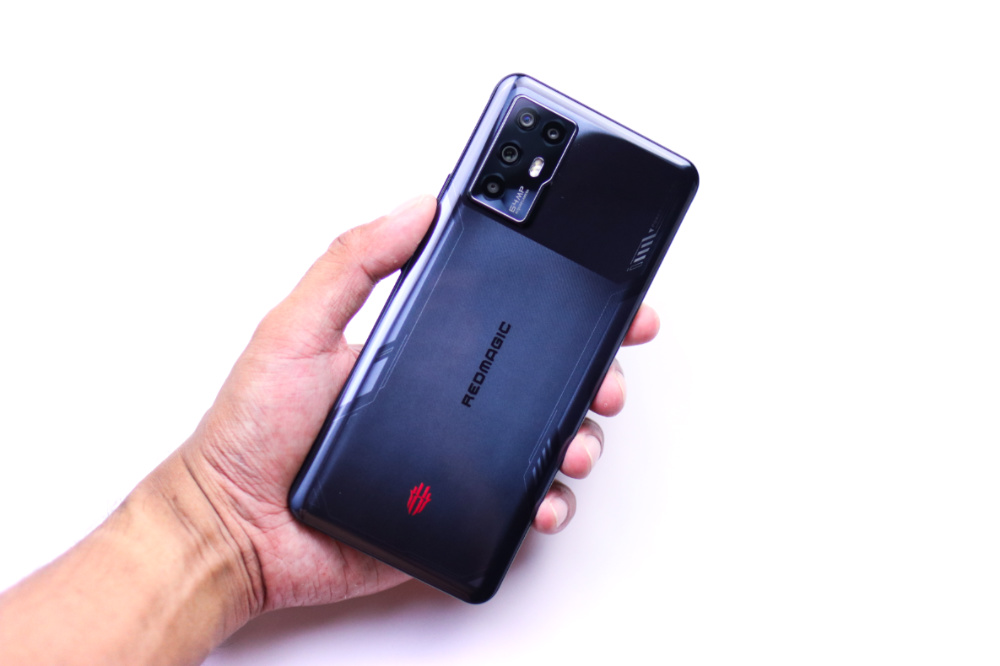 It’s a premium device, which you’ll immediately notice that the moment you take it out of the box. It’s got a cool metal frame with antenna bands all around and recessed centers for better grip, Gorilla Glass 3 on the front, and glass at the back. 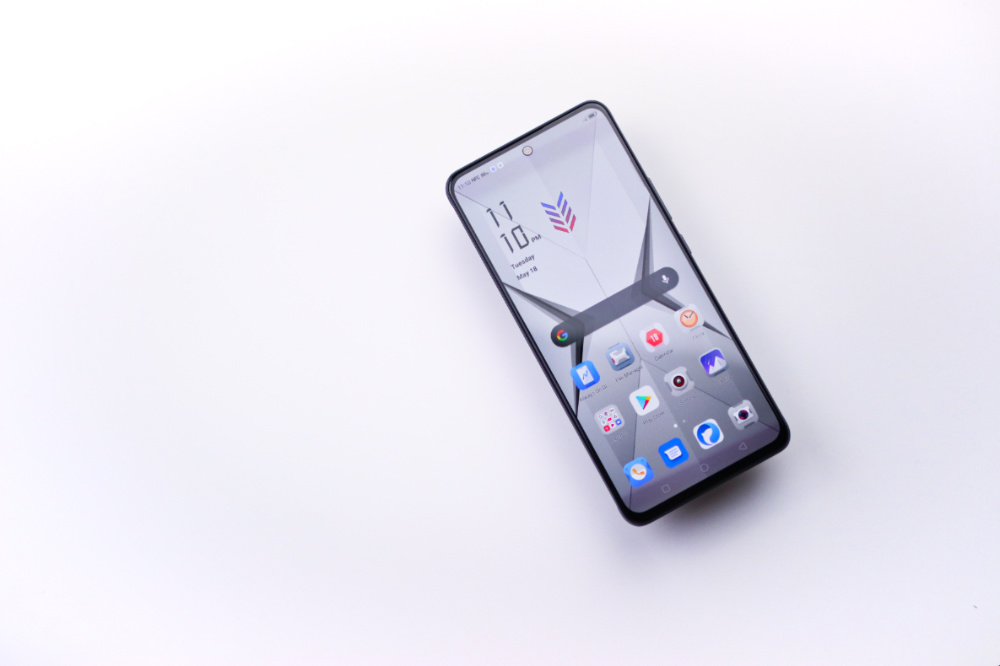 The REDMAGIC 6R is equipped with a large 6.67-inch AMOLED screen with Full HD resolution or 395ppi. In addition, it supports up to 144Hz refresh rate and a touch-sampling rate of 400Hz. For biometrics, it uses an in-screen fingerprint scanner. 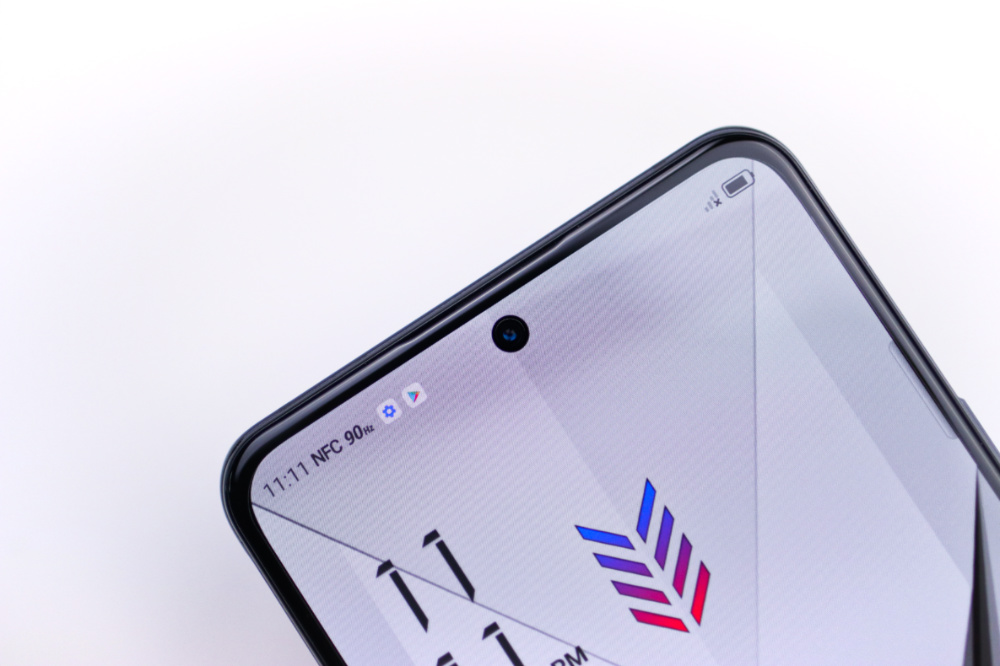 Placed above the screen is the hole punch for the 16MP selfie camera and, in the bezel, the earpiece for calls. 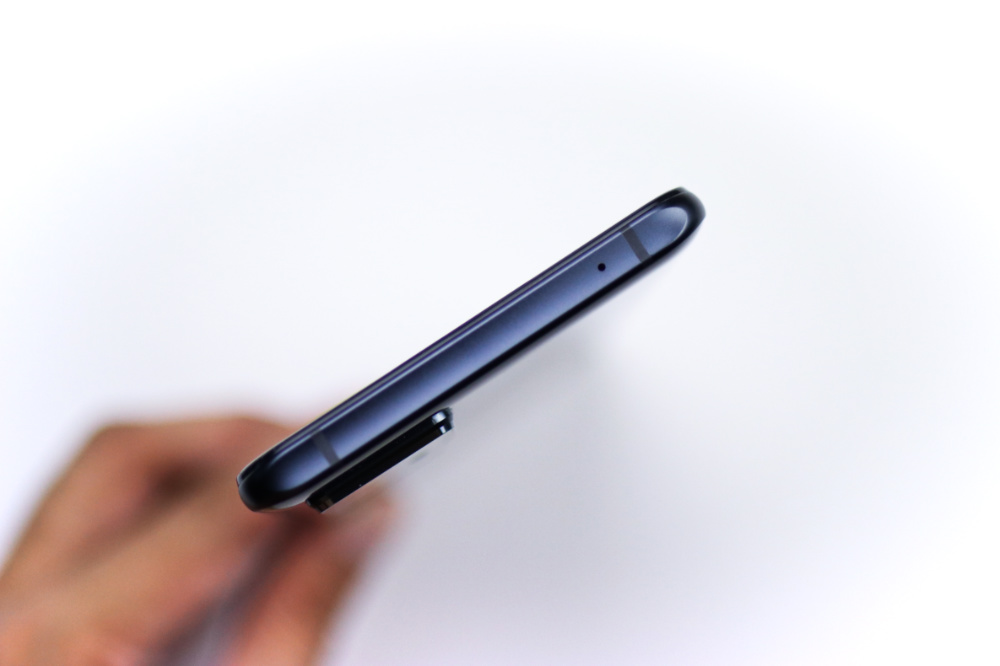 At the top frame, we have a pinhole for the secondary microphone. 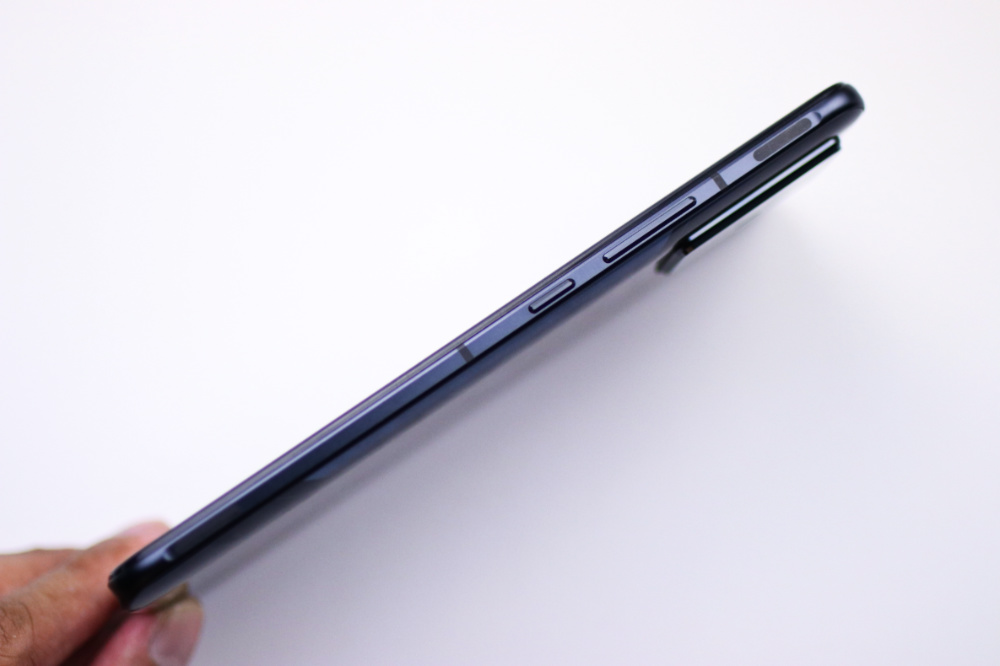 On the right are the metal buttons for the power/lock and volume. They’re solid and clicky but don’t rattle. Also found on this side are the pressure-sensitive shoulder trigger buttons with a 400Hz touch sampling rate. 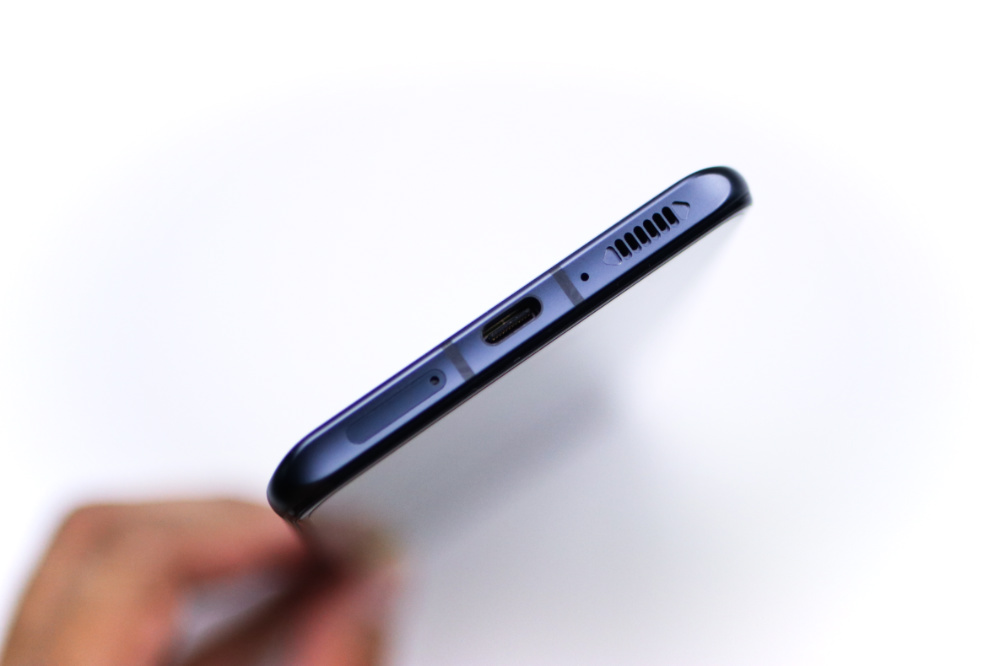 Down below are the USB-C port, main microphone, card tray for dual-nano SIMs, and loudspeaker. Unfortunately, we don’t have dual speakers here. 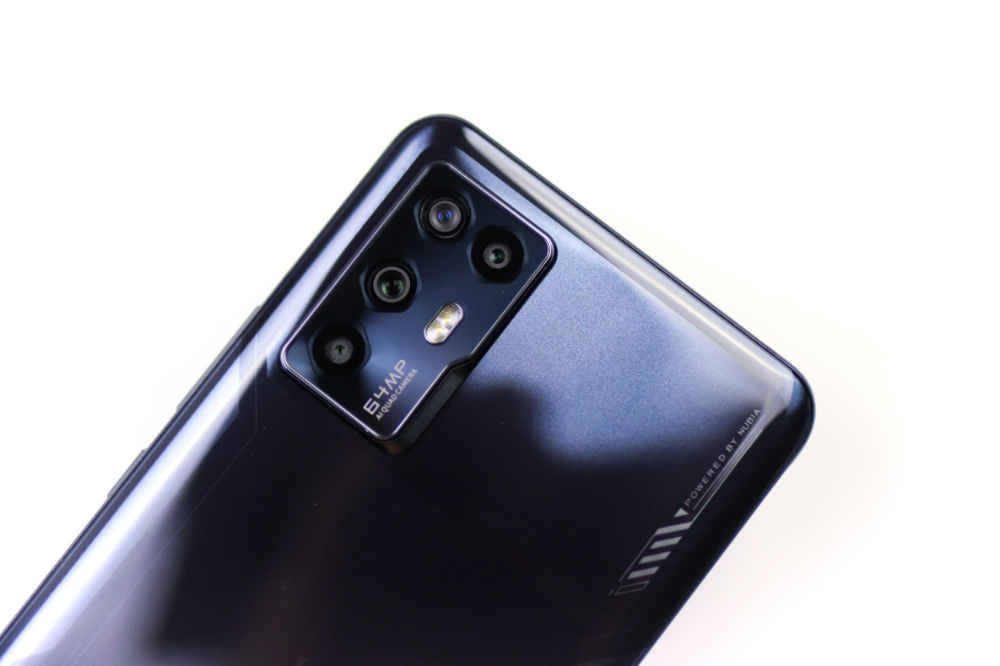 At the back, we have a quad-camera module consisting of a 64MP main, 8MP ultrawide, 5MP macro, and 2MP depth, as well as the LED flash. 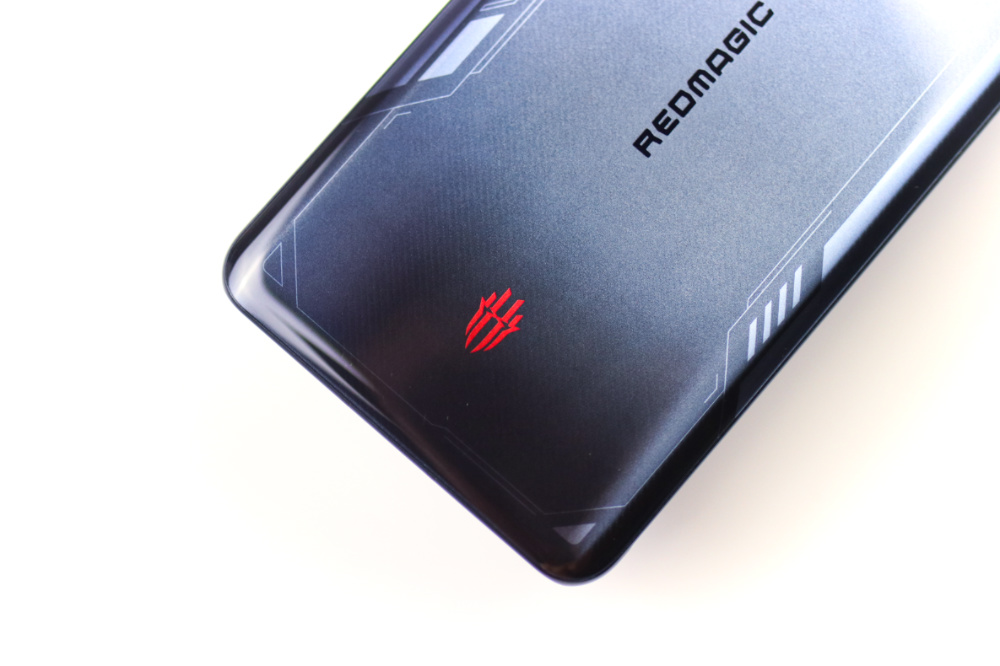 We also like the design at the back as it makes the phone look “high-tech” but not as intimidating as other gaming smartphones. In other words, it looks cool!

The REDMAGIC 6R is equipped with a 6.67-inch AMOLED display with FHD+ (2400 x 1080) resolution or equal to 395ppi. This is a good resolution for a gaming smartphone as we don’t really need 4K yet for a screen of this size. Protecting it is Gorilla Glass 3 and a pre-installed screen protector.

Screen quality is great with punchy colors, deep blacks, vibrant and has wide-viewing angles. That’s typical though for AMOLED displays, but what will entice users is its refresh rate. You have the option for 60Hz, 90Hz, 120Hz, and 144Hz. The higher the refresh rate, the smoother the experience, but with bigger power consumption.

The phone can dynamically adjust the refresh rate based on the scenario or application. So, for example, if the game can provide 144 FPS, the phone’s refresh rate will output 144Hz (max) to get the full benefit. But in our day-to-day use, 90Hz is enough to provide a good balance between fluency and power consumption. It also has a good touch sampling rate of 360Hz, meaning it can respond to your touches faster than typical smartphones.

When it comes to audio, we only have a single down-firing speaker. One of the first limitations as other gaming smartphones have dual speakers for immersive audio. It’s loud and crisp, though, but with weak bass.

The REDMAGIC 6R also aims to be a versatile shooter by packing a quad-rear camera setup which consists of a 64MP main, 8MP ultra-wide, 5MP macro, and 2MP depth-sensing. However, we find the UI frustrating as there’s no way to access ultra-wide on default mode. Instead, you have to shoot in Pro (manual) mode to select the ultra-wide lens. 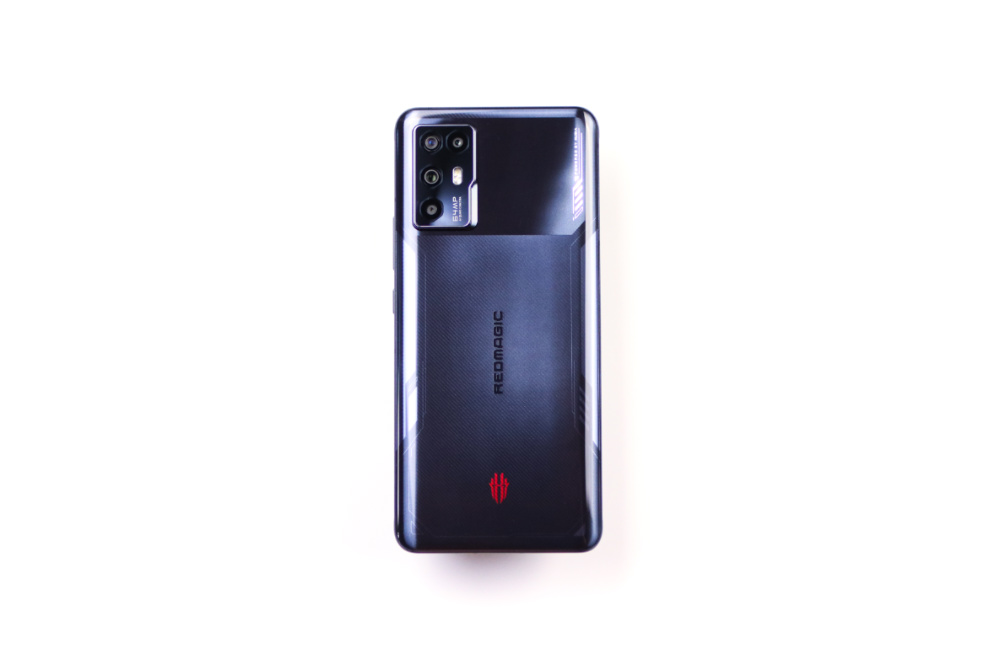 Image quality is good with plenty of details and rich colors. However, we noticed that it tends to render greens and reds with some extra punch. It’s got Portrait mode and can apply artificial backgrounds quite well, thanks to the dedicated depth sensor. It also has auto HDR and Night Mode, which also works fine. Though, the macro part is a bit of a hit or miss as we often get out-of-focus shots. When it comes to selfies, it’s got a 16MP shooter, which produces sharp images with natural colors. It also has portrait mode and beautify effects. Check out the samples below:


When it comes to videos, it can record up to a whopping 8K resolution at 30fps. It’s heavy on memory, though, as a 13-second clip is at 208MB. There’s also 4K at 60fps if you think 8K seems overkill. Watch the sample below:

For the software, it runs on REDMAGIC OS 4.0 based on Android 11. It looks like any typical Android 11 interface but with custom icons and wallpapers. In addition, it comes with the usual Google apps and some built-in tools and the nubia REDMAGIC equipment app, which shows the accessories you can use on this device. As for features, we got neo AI which gives you access to Smart game that records your gameplays and intelligent adjustment of refresh rate, and neo Speed which optimizes your device for faster startup and performance.

Then there’s Game Space, which houses all your games and automatically optimizes the system upon launch. A quick swipe from the side will bring out a dashboard that gives you access to Game Enhancement, display profiles, toggle aim assist, adjust refresh rate, recording, and shoulder triggers. It will also show you CPU, GPU, and network speed stats. All in all, it’s well-packed with gaming-centric features.

Powering the REDMAGIC 6R is a Qualcomm Snapdragon 888 with a 2.84GHz octa-core CPU, Adreno 660 GPU. The unit that we have is the 8GB LPDDR5 RAM and 128GB UFS 3.1 model. There’s a more powerful model with 12GB LPDDR5 RAM and 256GB UFS 3.1. As expected, performance is great, and can handle all tasks we threw at it, including gaming. When running Genshin Impact, its default setting is Medium, we placed it in the highest settings at 60 fps, and it ran smoothly, even with 144Hz refresh rate enabled. It also scored high in benchmarks apps. Take a look below:

When it comes to cooling, the REDMAGIC 6R doesn’t come with a fan, unlike other gaming smartphones, but an accessory is available as a separate purchase. However, it uses a multi-level cooling system that consists of graphene, vapor chamber cooling, thermally conductive gel, and superconducting foil, which works in tandem with the metal frame to dissipate heat.

While playing Genshin Impact, we got a recorded temperature of 51-degrees C. It’s hot on the top side but tolerable. Using the case included in the package will make it more bearable.

The REDMAGIC 6R has dual-SIM, 5G, WiFi 6, Bluetooth 5.2, GPS, NFC, and USB Type-C. Unfortunately, there’s no 3.5mm audio port, but the package comes with a USB-C to 3.5mm adapter. So when it comes to overall connectivity, this device is pretty much loaded. 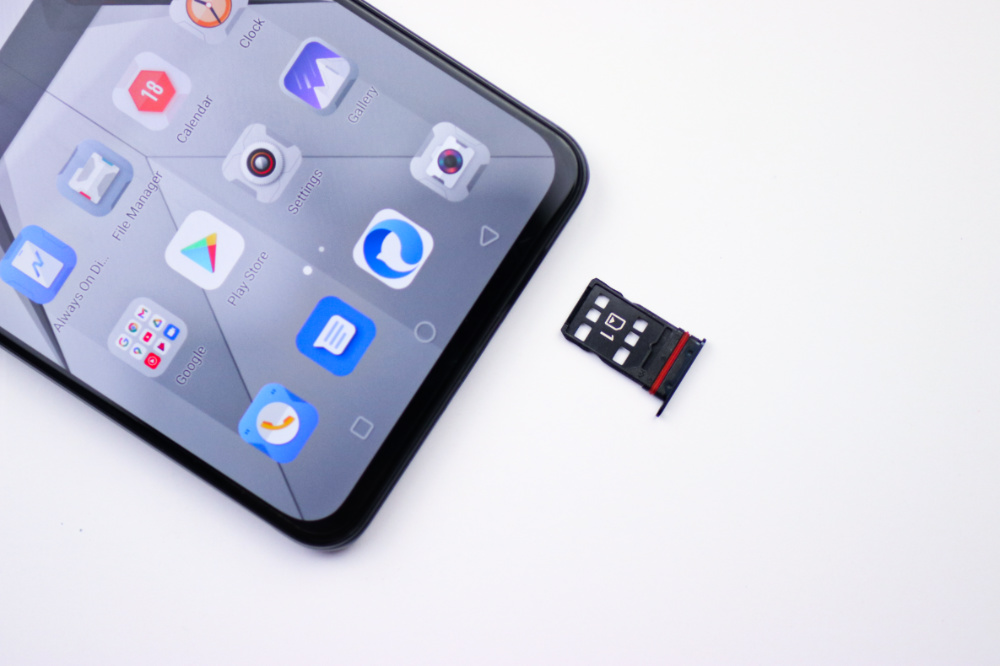 For the battery, it has a 4,200mAh capacity, which is good enough for a whole day of heavy use at a high refresh rate. Our video loop test, which involves playing a 1080p video on loop in Airplane mode at 50% brightness and volume, got us 15 hours and 30 minutes of playback. Charging, on the other hand, takes a little over an hour with 30W fast charging.

The REDMAGIC 6R is the kind of device for users who want the performance and features of a gaming smartphone without the bulk. It doesn’t have flashy features but instead focuses on things that matter the most, like display, chipset, memory, battery, advanced wireless connectivity, and cooling. Our only gripe is the lack of stereo speakers and the odd placement of the loudspeaker. But other than that, this is a great gaming phone to have if you’re on a budget.