A few weeks ago, O+ has introduced the Xfinit, equipped with 3GB RAM and a huge 32GB internal storage. With the brand joining the bang-for-the-buck smartphone race, will it capture your hearts (and pockets)? Here is our review of the brand’s newest smartphone.

Parts of our hands-on and first impressions are integrated into the review.

The Xfinit’s design follows the same aesthetics of other O+ smartphones. At the front of the device, the all-glass display can be seen, including three capacitive keys that do not emit light. On the right side, we have the volume rockers and the power/lock button. On top lays the microSD card slot, and the microUSB port can be seen at the bottom. The sides create a two-tone combination of accentuating chrome and polycarbonate coming from the phone’s back shell. Flipping the device over, we have the device’s protruding camera emblazoned in chrome, its accompanying LED Flash beside it, and the speaker grill at the bottom. Sporting a bronze color with a hint of mineral glitter, the semi-glossy back cover may be susceptible to some smudges from fingerprints, but the color can easily hide it away. The back plate design is also reminiscent of smartphone designs we’ve seen the past year.

The Xfinit’s design is good, overall. Thanks to a modest 2000mAh battery capacity, it does not have any heft to it when held, and is lighter compared to other five-inch contemporaries such as the LG G3 Beat. It also presents itself with a thin profile of 8.4mm. The company has also lessened the display bezels compared to other new O+ smartphones, but is still prominent at a 69.8% screen-to-body ratio. 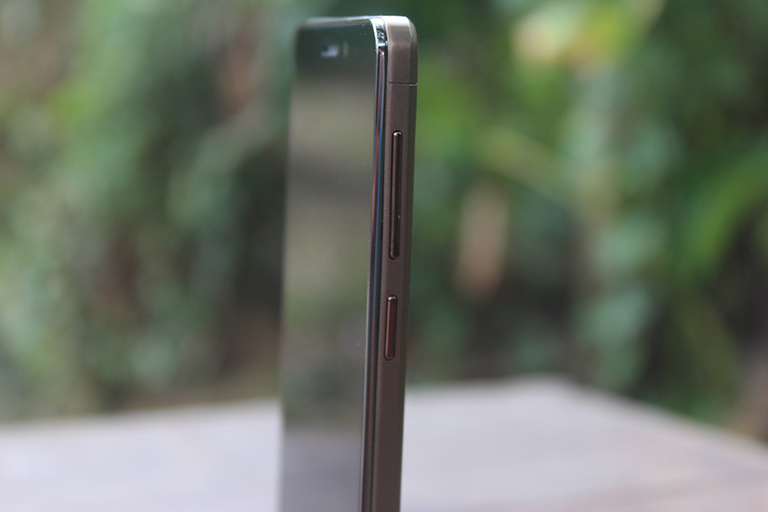 We also have certain issues that we faced when using the device. For example, removing the unibody back shell will sometimes disorient the attached volume and lock buttons out of their places as they are only held by a thin layer of glue, so you have to reinsert them when they pop out before placing back the whole case in. An LED notification light is also nowhere to be seen, considering most smartphones now have this feature. The capacitive buttons also do not emit light, so it might take a while before you get used to the three-button setup if you’re coming from another phone with a different layout.

Continued in next page: Display and Multimedia, Camera, and OS, UI, and Apps