The Find 7a is Oppo’s newest flagship smartphone to be released in the Philippines and comes with specs that rivals most of the other global brands. It’s a huge and respected brand in the mainland so we’re expecting it will make the same impact in the country. Check out our full review of the Oppo Find 7a below. 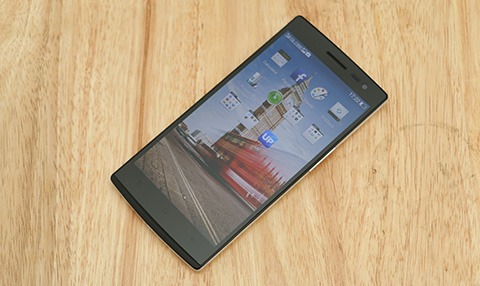 It brought with it a design signature and some pretty innovative mobile technology that’s rarely seen in other brands. So we wait and see if it can carve out a niche of its own and get a significant piece of the pie in this very lucrative smartphone market.

The Oppo Find 7a brings with it some fine piece of mobile craftsmanship. It looks simple yet elegant, very solid construction and has great attention to detail. 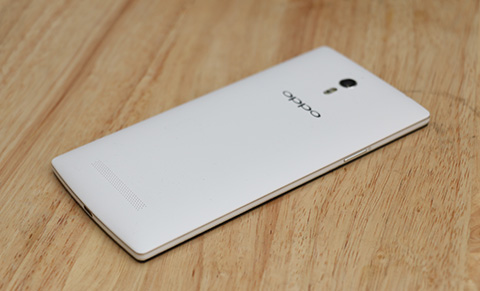 The body feels like one slab of glass on polycarbonate with the front panel completely covered in thick sheet of glass. The edges are wedged and the corners are sharp.

The power button is one the left side while the volume controls are on the right. The 3.5mm audio jack is on top while the microUSB port is at the bottom end. 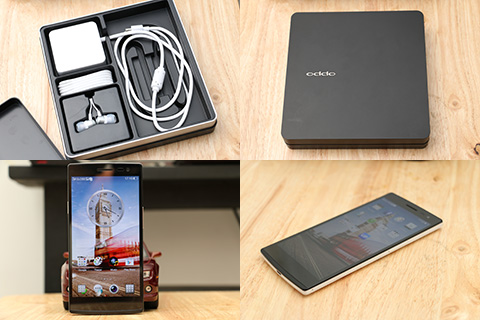 The Skyline Notification is just below it — a curved LED light that glows bright blue and alerts when there are notifications and breathes when charging. 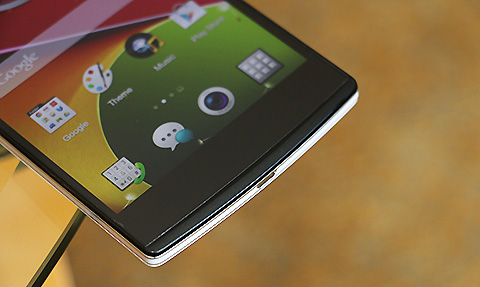 Perhaps, the most challenging of all is removing the back cover to insert the battery, microSIM and microSD card. There’s a tiny pinhole or socket that needs to be pushed down so that the cover is released from its locked and ready to be pried open.

The body is slightly bulky though and depending on the size of your hands, might need both to comfortably use and navigate.

The Find 7a uses an IPS display with a resolution of 1920×1080 pixels, giving it an effective pixel density of 401ppi. It’s got very good viewing angles, rich color saturation, and has good visibility even in the outdoors or in direct sunlight. 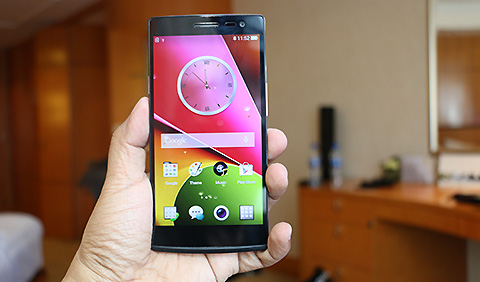 The original device that was lent to us apparently had a thin film cover as screen protector so we initially thought the display was somewhat matte and muted. Nevertheless, the images are very sharp and vibrant, very responsive and snappy. 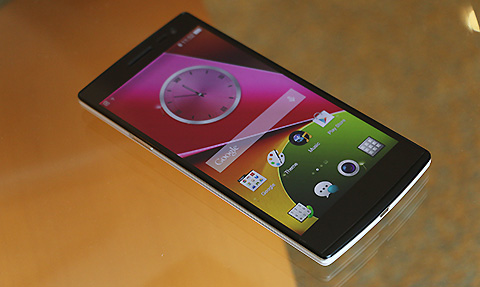 We’ve receive reports of some random ghost touches but fortunately our review unit did not have the same bug.

The Color OS is based on Android 4.3 Jellybean and adds a lot of really useful and practical use like gesture commands and shortcuts. The UI looks more polished and does not depart that far from Android’s native skin. 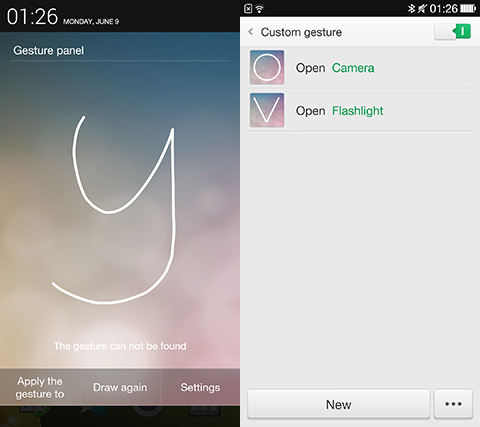 We especially liked the Gesture controls which puts a quick shortcut to more common apps and functions straight from the off screen. Draw a circle in the display panel while it’s in the off state will unlock the phone and launch the camera app; draw a “V” and it goes straight to the flashlight, and the “< " or ">” gesture will switch to the next or previous songs.

You can also make your own custom gestures — like a letter “y” to wake up and launch the browser and load yugatech.com. It’s a very useful shortcut for a lot of things you often use on the device. The UI is simple and easy to use with multiple home screen and a widget screen. The native camera widget allows you to open the camera and take shots via a small widget window, giving you access and control to other widgets while doing so. The call and SMS interface looked pretty basic with the virtual keys large enough and very comfortable for typing. 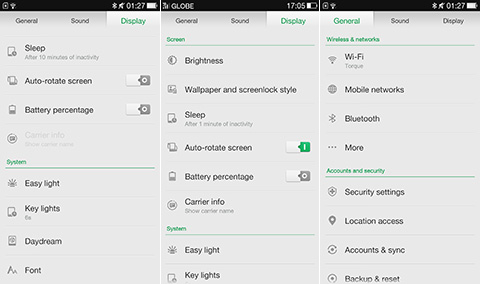 There are so many other additional features added in the settings. Oppo even went to the small detail of displaying the operator logo instead of just the name on the status of the phone is something worth noting.

The large 5.5-inch screen with full HD resolution is just right for web browsing and perfect for watching videos or movies. The speakers at the back provides pretty good sound profile and volume. The MaxxAudio feature is something like a booster which is provided by Waves Audio. It has good bass but not as great as we’ve experienced with BoomSound from HTC. The 13Mp images looked very good, sharp and just the right saturation. Some colors pop out better (like red) than others. here are some sample shots we took form the Find 7a (resized to 800px).

Here are some video clips of 1080p recording by the Find 7a:

If you want to see how the 4K resolution video looks like, you can download a copy of the raw file here.

With top notch performance, the Find 7a is able to chomp almost anything we threw at it. The Snapdragon 800 chip is also capable of handling 4K, thus the video recording option of the camera at that resolution. 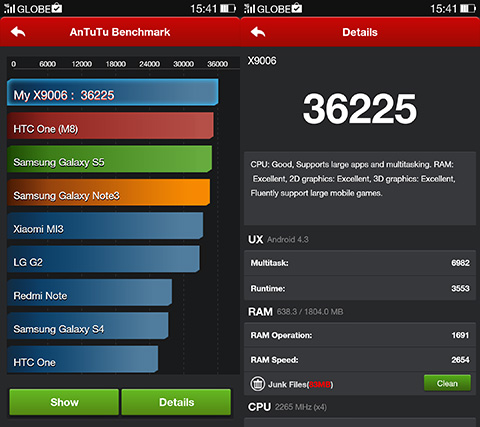 The handset also scored really high on almost all of our benchmark tests with the Antutu score going over 36k, the highest we’ve seen — even a few points higher than the Galaxy S5 (which was running a supposedly faster Snapdragon 801 chip).

The Find 7a has all the connectivity options one needs in a smartphone — WiFi a/c, NFC, Bluetooth, LTE where we normally get speeds of up to 24Mbps via local networks.

One of the most impressive features of the Oppo Find 7a is the Rapid Charge Technology. It allows for a very fast charging of the handset that no other handsets have ever achieved before. 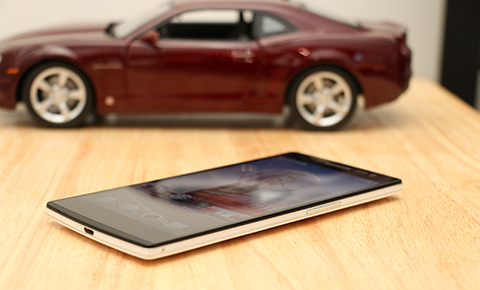 The wall charger has a maximum charging power of 4.2A, twice the charging capacity of most tablets and four times that of a typical phone charger. It looks like a laptop charger. The handset has a built-in chip that is able to accommodate that much current and not damage the internals of the device.

In our weeks of using the charger, we can definitely say it works as they claimed it would. We’re able to full charge the device in less than 2 hours.

In our standard battery bench (50% brightness, 0% volume) , the Find 7a managed to last about 10.5 hours on a single full charge.

A good balance of nice, simple design and good hardware at an affordable price point makes the Oppo Find 7a an ideal flagship smartphone. It matches the configuration of many flagship handsets of other global brands at only 60-70% of their suggested retail price. And there’s still the other Find 7 sibling to look forward to this month.

The Color OS and all the custom features Oppo has built into it shows that vanilla Android still has a lot of room for practical improvements. While Oppo has not directly addressed the battery consumption issue that plagued all smartphones for a long time, it’s innovative VOOC fast charging technology sure does make it a good alternative solution.

The Oppo Find 7a has a suggested retail price of Php22,990 and is available in retailers nationwide.

What we did not like:
* A bit bulky/heavy
* Not yet on Kitkat